When Upper Deck shared the company had reached a deal with legendary boxer Mike Tyson, fans were excited to see what the leader in sports memorabilia would come up with. And after fans got a first-look as Mike Tyson shared a couple images with his 2.3 million followers on Twitter, they shared their interest in these items directly with the champ. Here are just some of their comments:

@LL_Flight_M: i want these
@MikeViso: we need these!
@rivera939: wow Explosive man
@bobwick30: I’d take a Mike Tyson punch 4 that card!?
@T_Rhea1: Let me get a signed one Iron Mike! Please
@CruzTheSequel: I need a mike tyson autograph.
@Eyles007: awesome! Where can i get one?
@biglennys: it’s about time.

swashpower: Wow this is awesome 🙂 Amazin throwback Mike!
puffpuffsmash: My God !!!
rocheme: The real greatest of all-time!!!!!!!!! Hands down!
astro_lancelot: Best Boxer of All Time!
Impdestiny: I hope they distribute in Brooklyn. I’ll definitely collect.
unclecreepy: One of the coolest things I have ever seen

Upper Deck’s Athlete Relations Team had a great signing session with “Iron” Mike on Monday, July 2 in Las Vegas,Nevada where he signed a variety of Upper Deck Authenticated memorabilia and some new trading cards as well. Take a look at some of the awesome photos from the private signing session! 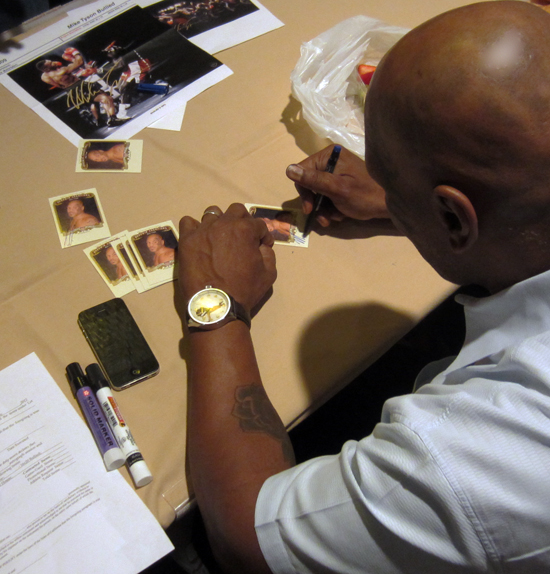 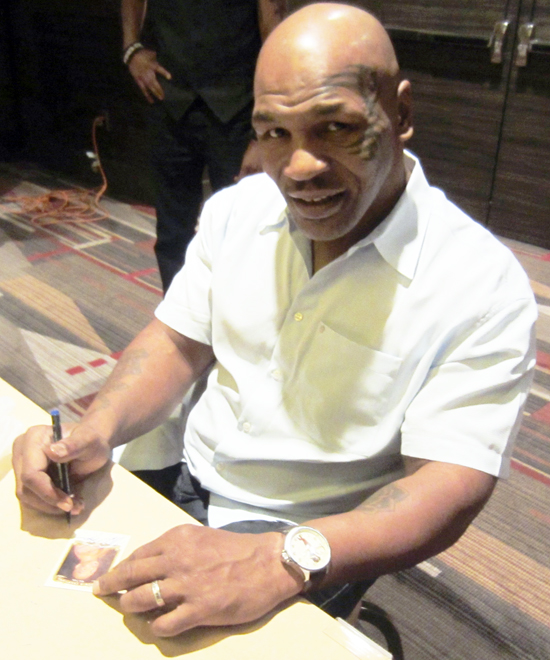 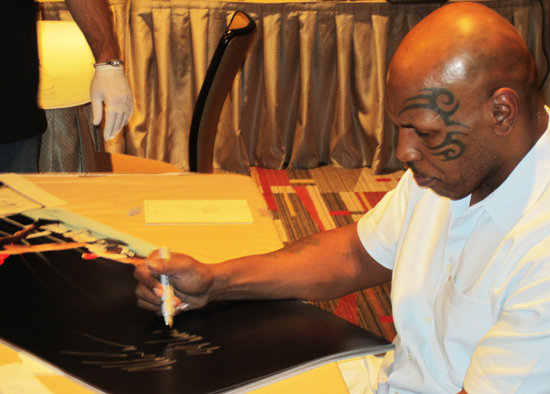 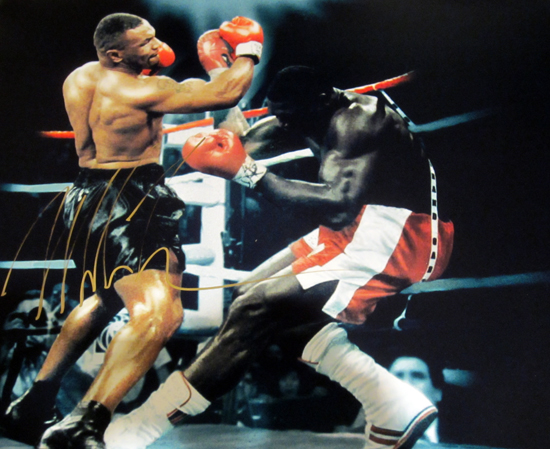 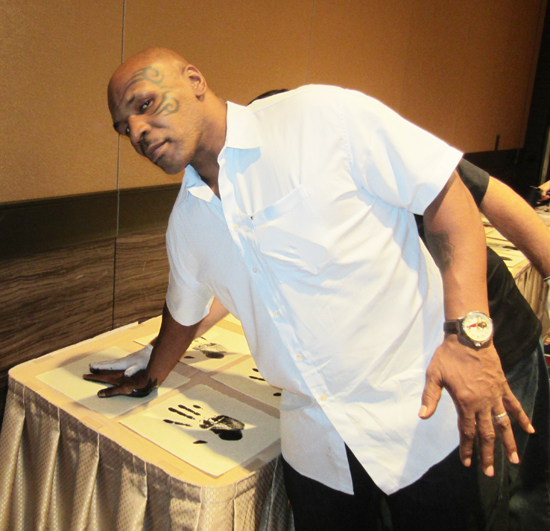 For the Tegata Piece, UDA gets Mike to share is actual hand print. 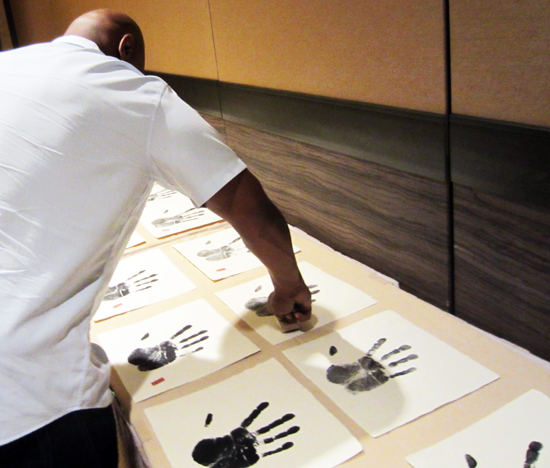 Next Mike stamps each print with his own custom “TYSON” stamp. 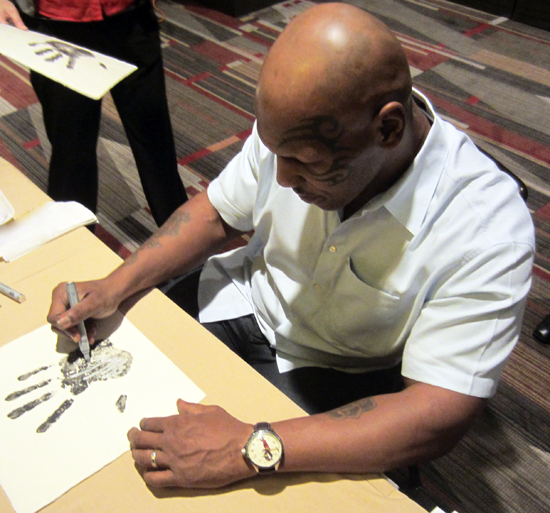 Then Tyson signs each piece. 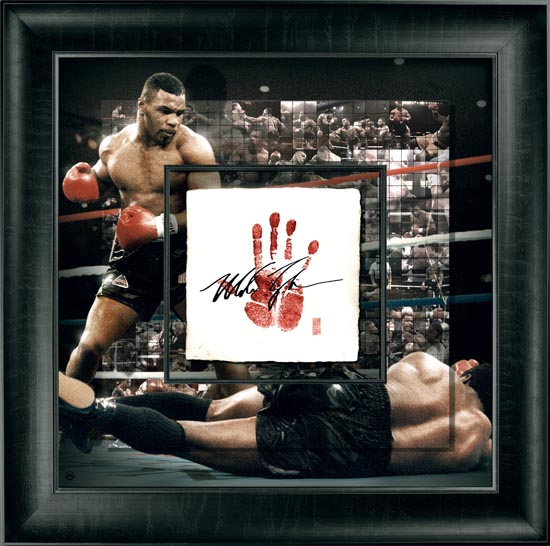 The final piece will be framed and matted like this mock up. Note: The actual piece will feature a black hand print with a silver signature as shown above.

Fans can get their first chance to score a Mike Tyson autographed trading card from Upper Deck when 2012 Goodwin Champions hits stores in mid-August and again with 2012 All-Time Greats Sports Edition in October. 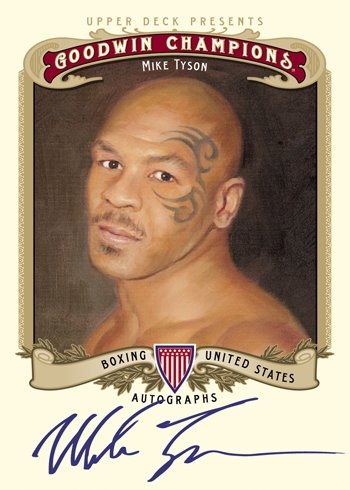 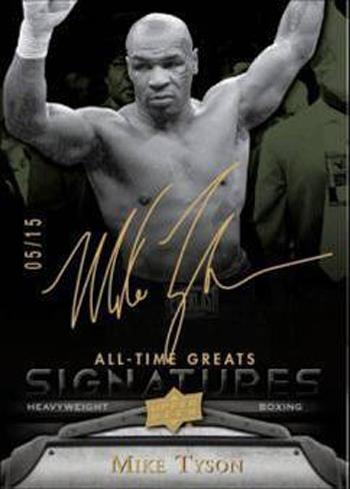 For boxing fanatics who would love to have an authentic signed Mike Tyson collectible on the wall of their office, home or mancave, the first pieces will begin rolling out on the Upper Deck Store in August. Framed pieces like “Tegata” and “The Show” will be available for sale in September.

Don’t miss your chance to own an amazing collectible from one of boxing’s greatest legends!


I enjoy Goodwin Champs, but not as much as my roommate. She pulled the Gretzky auto last year. Tyson this year? Hope so.


The Tyson hand prints signed, framed over top of him KO’n Berbick will be about $5,000.


Finally somrthing that almost every boxing fan would like to have towards a collection of memorabilia. “Iron” Mike is back. Mike Tyson is the reason I started whatching boxing!! At one time he was unstopable. Get a piece of Iron Mike memorabilia before they are gone. Awesome product!!!!!