The Stanley Cup Playoffs brings out the best of passionate hockey fans each and every year. Everyone wants their team to end the season by taking turns hoisting the Stanley Cup. Many hardcore fans have their own rituals like growing their very own playoff beard or wearing their favorite jersey while watching the game. It also brings out some bandwagon fans and even celebrities like Rainn Wilson who had a memorable exchange with the Los Angeles Kings on Twitter.

As fun as the Stanley Cup Playoffs are and all the stories that go along with them are, they also serve to energize and ignite the trading card industry. Players who have a great performance in a series or throughout the playoffs can suddenly find themselves as superstars in the hobby. One just has to look at the memorable run Jaroslav Halak had with the Montreal Canadiens a couple years back to see what it can to collector’s interest in a player. He has certainly cooled since leaving Montreal, but for awhile, his collectibles were white hot.

I thought it would be fun to take a look at players who had some stellar performances this season and what it has meant to their collectibles. There are quite a few others who saw a spike so feel free to share anyone you think I missed in the comment section below! 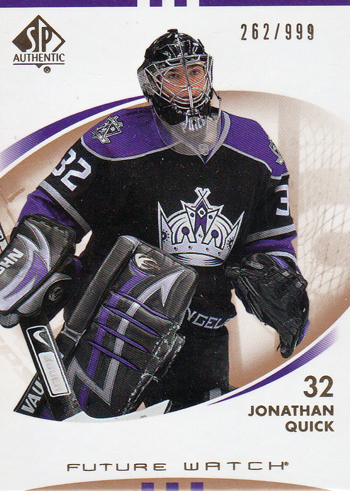 Jonathan Quick – He is the star goaltender and Conn Smythe winner for the L.A. Kings who has been flying under the radar for most of his career. His performance this season, especially in the playoffs, has made him a “must have” with thousands of goalie collectors and it seems like many new player collectors are targeting Quick to be their go-to guy. When 2007-08 NHL SP Authentic released, you would be hard pressed to sell his rookie card for more than $5 and they were commonly found in dollar bins at card shows. However, with his recent success his cards have been selling for big bucks and his SP Authentic rookie rarely sells for under $100 today with the limited parallel numbered to 100 going for over $150. 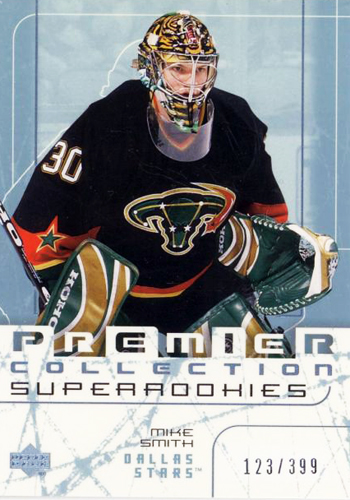 Mike Smith – Mike Smith is another underrated goaltender who spent most of his time in the backup position during the beginning of his career after being drafted 161st overall by the Dallas Stars in 2001. Smith made his way around the league with various teams and even cleared waivers before he settled with the Phoenix Coyotes to replace Ilya Bryzgalov. Unfortunately, the Coyotes’ 2012 playoff run was cut short in the conference finals by the Kings after defeating the 2010 Stanley Cup Champions, the Chicago Blackhawks, and the Nashville Predators. Mike Smith fans were few and far between until a stellar regular season and playoff performance which included a NHL record for most saves in a regulation shutout win (54 saves against the Columbus Blue Jackets on April 3, 2012). Until this year, you could barely give away his rookie cards which now go for upwards of $40. 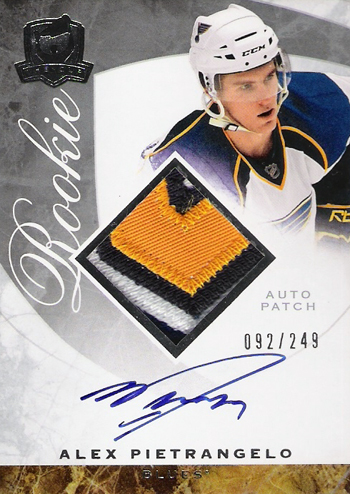 Alex Pietrangelo – After being drafted 4th overall in 2008 by the St. Louis Blues and subsequently spending the majority of the 08/09 and 09/10 season in the OHL, many fans had come close to categorizing the defenseman as a bust. However, his last two seasons with the Blues have proved otherwise and he has become to be a key component of the Blues’ blue line. Many fans in the gateway to the west had high expectations for the Blues after finishing second in the Western Conference at the end of the regular season, but Jonathan Quick and the Kings had other plans by making quick work of them (no pun intended) in the second round. Luckily for myself as a super collector of Alex Pietrangelo, I was able to purchase a four color patch upgrade of my 2008/09 NHL The Cup Autographed Rookie Patch card at the beginning of the season for $60. Today I would be hard pressed to find a similar card for less than $125.

Although many true hobbyists despise this part of the year because we see such crazy swings in values, it is kind of fun to watch as player values skyrocket. If you are a player collector whose cards are selling for inflated prices during these playoffs, my piece of advice is to sell your more common cards that you will be able to pick up in two or three months time for a fraction of what you sold them for. It is a win-win situation because casual hockey fans get to own a piece of hockey history and you can use your newly acquired funds to purchase other great cards for your collection or maybe even save up for Upper Deck’s premium releases like SP Authentic, Ultimate Collection, SP Game Used, and The Cup.

Why do we see values on some cards go through the roof during the playoffs? Because It’s The Cup!

Alex Vegh is a trading card enthusiast and was the winner of Upper Deck’s Ultimate Fan Promotion. Alex is also an active member of Upper Deck’s Volunteer Alliance and a participant in countless internet sports forums.

Great article! It was a good read, and those 3 names are definitely high on my list. Crazy to think that just a RC /999 is going for over $100!I think that one guy whom you left out is Dustin Brown! Because of his short amount of cards, his higer end RC’s(I.E. his SPx RC) have been going for a mint! I’m glad I started collecting him last year!

Sweet read, and keeep up the fantastic work with the UDVA!


when the kings were in the stanley cup, i saw the opportunity for the first time in my life to actually make a little money from what i hoped would happen. the card skyrocketed in value and i still had a chance. i sold my only jonathan quick UD ultimate rc for over $100. i didnt want to sell it since it was the only rc i had of him but when i realized how few rc quick had i knew that it was my one chance to cash in while the hype was still goin. im glad i did and im planning on picking up a rc of him at some point down the road but for now ill just concentrate on my tuukka rask collection


I perfect example (even though they never made the playoffs) would be last year when James Reimer came up from the Marlies and took over the starting job from J.S. Giguere. His Cup Auto RC that was $25 took off and is now booking at $300, all becuase he went 20-9-2 in the last 31 games of the season.