After LeBron James made “The Decision,” most basketball fans immediately resented him. Maybe that is putting it mildly. The LeBron haters swiftly came out of the woodwork and have been pumping a steady stream of angry rants against the NBA star since he moved south to play in Miami. It didn’t help when the Cleveland Cavaliers’ owner Dan Gilbert piled on as well.

What has LeBron done in the aftermath of all that? It seems like all the right things. Last year he apologized to the fans in Cleveland for how it all went down.

Earlier this season LeBron shared that he wouldn’t rule out potentially returning to Cleveland while also sharing he doesn’t hold a grudge against Dan Gilbert for his comments. It is one thing to appear like you are growing up in the eyes of the press, but the real test of a man is what he does when he doesn’t think the cameras are on. We witness this a few months back when LeBron James made it a point to get his teammates to take pictures with members of the U.S. military while the team was waiting for their flight. This was a really great story. And just this week, LeBron humbly accepted his third NBA Most Valuable Player award.

He has his team poised to take the title this year and that is all he ever really wanted to play for. Can you blame him for wanting to play on the highest stage for one of sport’s greatest trophies? I don’t think so. And every positive thing he does now makes him more desirable to collectors. Almost a year ago, I shared that I felt LeBron James was the #1 athlete to invest in at the time. I’m sure those who took my advice are very happy they did as they invested when the market for LeBron was at an all-time low. 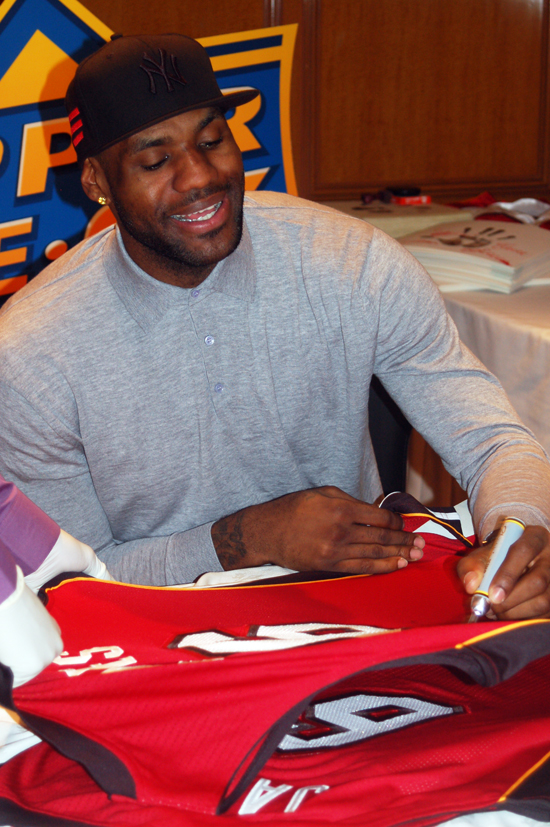 I still believe LeBron James collectibles are a good buy until he wins his first NBA title which based on how he is playing, may only be a matter of weeks away. If he continues to dominate the association as we have seen, the Most Valuable Player will soon have the “Most Valuable Collectibles.” And Upper Deck Authenticated is pleased to be the exclusive source for authentic autographed collectibles from “King James.” Take a look at some of the items available for LeBron by clicking here.


I agree with you Chris. Lebron is THE best player in the NBA and winning his 3rd MVP in 4years should prove it. I live in Columbus OHio and im a barber so i hear ALOT of hating on Lebron at the shop and im always the only one sticking up for Lebron and telling everybody to get over it already. He gave the Caviliers 7 years and 2 contracts! He dosent owe Cleveland or their fans anything. He’s from Akron anyways, not Cleveland. I cant wait for UpperDeck Fleer Retro to come out so i can bust a bunch of boxes hoping to pull a Lebron auto! Long live the KING!


Over the years UD have released so many amazing items of memorabilia which have been great to collect. However since the move of the King to Miami these releases seem to have slowed to be almost non existant with collectors having to rely on other methods to expand their collections.

All-Star jerseys were released every year up until 2009 and then just stopped and with Lebron winning his 3rd MVP it would be another negative for collectors of Lebron memorabilia if a commemorative jersey was not released as it has been in prior years.

As a collector I ask that UD help keep the passion alive.