We love to spotlight our Certified Diamond Dealer partners and some reasons why you need to visit their stores. We especially love to share stories about shops who have managed to become successful for a long time. And that is the case with Card Shack in Lynbrook, New York. Steve Cardi is one of the truly good guys in the hobby and by treating his customers like gold they have come back repeatedly making the Card Shack the hobby shop you’ve got to visit in New York. He has a whole cavalcade of festivities planned for their 25th anniversary in the hobby beginning next week so make your plans to be a part of it! 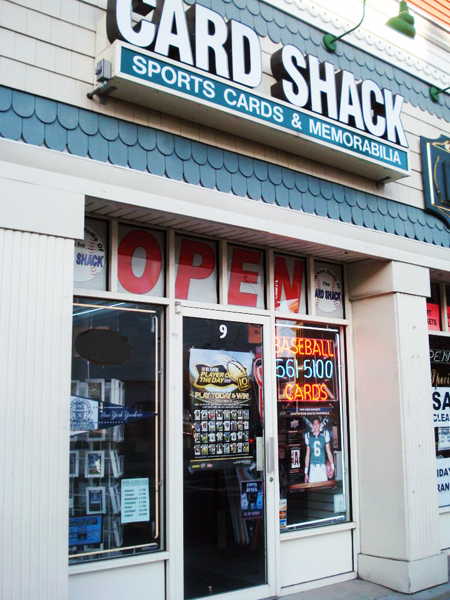 “I grew up as a New York Islanders fan and I loved the sport of hockey growing up. When I was 10 years-old back in 1980 two very special things happened; the United States hockey team won the gold medal (The Miracle on Ice) in Lake Placid and a few  months later the New York Islanders won their first Stanley Cup while going on to winning four more Stanley Cup Championships in a row. It was that year that my passion for card collecting exploded.

“With not many stores in or around my hometown of Valley Stream, New York, my parents would take me every once in a while to card shows. I also purchased complete sets through magazines like the Sporting News and Sports Illustrated. Things were much tougher before the internet for collectors without a hobby shop in their area.

“During high school I decided to rent a table at a local show and set up with my best friend who loved cards like I did. After weeks of pleading with my parents to drive me to the card show, they relented and that was my first venture into the business. Approximately one year later I told my dad I wanted to open up a small card shop and he agreed to help out. I was a junior in high school and had just got my drivers license. I found a small storefront (450 sq feet) less than two miles from my house and since I was still in school, it was fine that I was only open part time. Since the location was so small, I thought the perfect name for the shop was ‘Card Shack’ which has stuck as we have grown over the years. 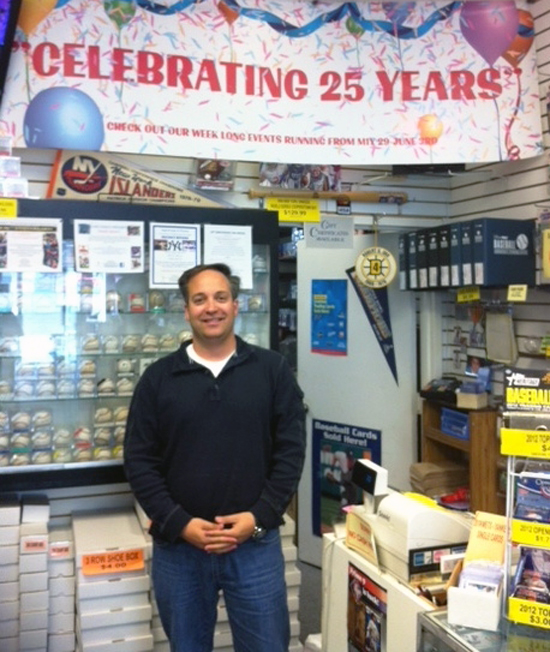 Steve is celebrating 25 years in the hobby and we want to make sure our fans don't miss out on the festivities!

“As my success grew, I put myself through college by scheduling my classes very early as I wanted to devote more time to my business. My parents agreed to be supportive of my business as long as I maintained my grades. After four years in that location I moved my business to a much larger location back in my hometown of Valley Stream. It was there that I had 18 great years before relocating one mile away back to the town where I started. 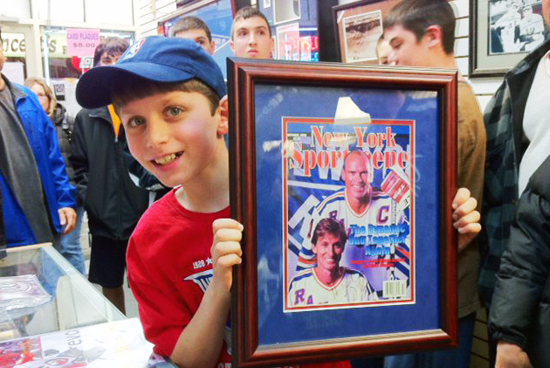 Steve runs tons of promotions and giveaways at the shop to thank his loyal customers. The bottom line is that those who become a frequent customer at New York's Card Shack score!

“Through the years I have expanded from just strictly sports cards to carrying a full line of sports memorabilia and sports novelty items. In early 2001, I launched a very successful web site that is hosted by Beckett.com with almost 4 million sports cards listed. As much as the internet is where a lot of the card business is generated, my passion is still for engaging collectors in the shop and seeing not only the regulars, but new collectors as well. This is my passion as it always has been and I strive hard each and every day to give back to my customers. People ask me how I’ve been in business this long, I tell them, ‘Take care of your customers.’ 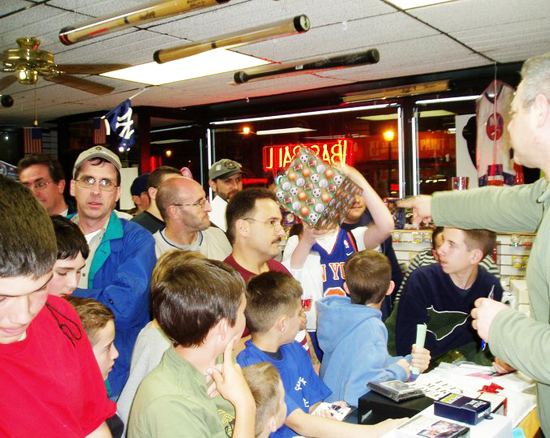 Card Shack supporters know better than to miss out on Steve's promotions!

“And now that I’ve reached 25 great years of being a brick and mortar store, I am totally excited for what is still to come. I run lots of promotions throughout the year, but with the 25th anniversary looming on May 30, 2012 will be the best of all my yearly promotions in a one week bonanza! Here is the calendar of events for what is sure to be a very memorable week for our collectors at the Card Shack:

Tuesday, May 29 – We are starting off our week with a Card Flipping Contest (call for details).
Wednesday, May 30 (actual anniversary day) – For one day only, fans can save 25% off any items in the store, don’t miss the savings!
Thursday, May 31 – We are having New York Yankees 1977 & 1978 World Series Champion centerfielder Mickey Rivers appearing for a FREE autograph signing at the store (call for details).
Friday, June 1 – Don’t miss our Customer Trade Night where you can bring in your singles to trade with other collectors.
Saturday, June 2 – We will start off with a Pack Wars for Kids and a Card Collecting Seminar (under 12 only). It is also ‘Jersey Sponsorship Day’ all day where anyone who comes in wearing a jersey receives a free pack of cards! We will be ending Saturday with a bang, by having our 1st session of Anniversary Box Breaks.
Sunday, June 3 – The anniversary festivities end in style with a Customer Appreciation Brunch from 10:00 a.m. – 12:00 p.m. followed by our 2nd session of Anniversary Box Breaks in which the winner will receive a prize that could be valued up to $1,000.

“Lastly our Good Student Program which has grown immensely since the inception in 2001. We will be rewarding all students double Pack Wars Bucks the week of our anniversary for all good grades brought into the Card Shack. We look forward to seeing all the sports fans at the Card Shack!” 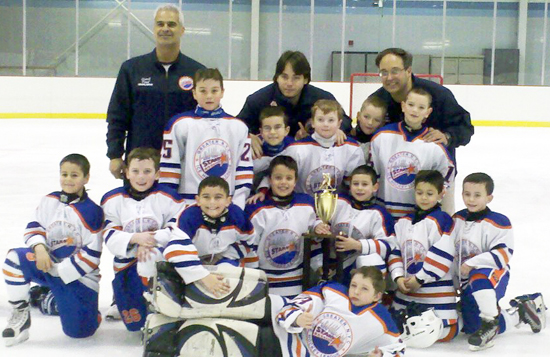 Steve understands the importance of giving back in his community as well. Here he is with some future Upper Deck NHL collectors and possibly players!

As you can see, Steve is pulling out all the stops to thank his valued collectors with this great event. Steve has served on multiple Chamber of Commerce boards for his great creativity with the youth as long as a long time sponsor of local youth teams and leagues. And he has three boys who all think that their dad has the best job ever! Drop by the Card Shack and see for yourself! 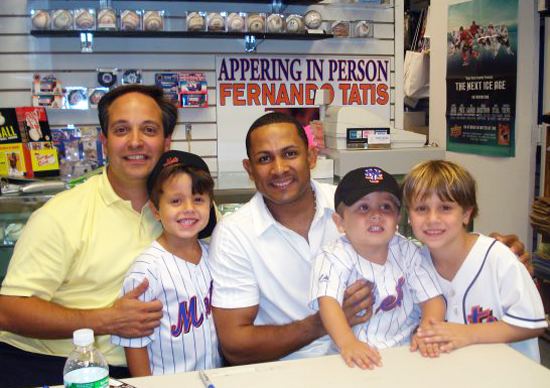 Steve invests in bringing in players to do signings for his customers. Here he is with his three boys and Fernando Tatis at the Card Shack.


This is a great store about one of the BEST hobby stores in the entire country! A landmark 25th Anniversary for a landmark store. This article opens up by stating that “Steve Cardi is one of the truly good guys in the hobby”. That couldn’t be more true! Anyone near the Long Island area should make the effort to stop by & see what this hobby is really all about! Congratulations Stevie!!!


Great job Steve! Wish I could visit. Sounds like it’s going to be fun’


What a GREAT store! How lucky you rae if you live in the Long Island area! Congratulations on the 25th!