The More LeBron James Scores; the More You Save!

In the sports collectibles world, fans are not jumping all over LeBron James still, but they are elsewhere. In the world of gambling, the smart money is on LeBron James. At the time of the NBA All-Star break LeBron had become the clear-cut favorite to be named the league’s most valuable player at the end of the season with his odds now at a staggering 1/2. Kobe Bryant has the next best odds at 9/2 and Kevin Durant is behind that at 6/1. Worthy of note, Jeremy Lin is now at 25/1, but after LeBron and the Miami Heat shut down the “Linsanity” last week, those odds may jump back up.

Collectors however still are not jumping on the bandwagon. Traditionally most collectors wait until a player achieves an accomplishment like another NBA MVP award or title before they invest in their memorabilia, and by doing that, they pay a premium.

Last summer I did a blog post about the top ten athlete’s authentic memorabilia to invest in now and LeBron James was my number one pick. LeBron is making me look like a genius by putting together another MVP season and is looking good to bring home his first NBA championship. Fans who invested in LeBron when I wrote that post are likely sitting pretty, but many fans are still on the fence. And yet, there is still an opportunity to get in on LeBron before he blows up, courtesy of Upper Deck and a special promotion we will be running throughout March. 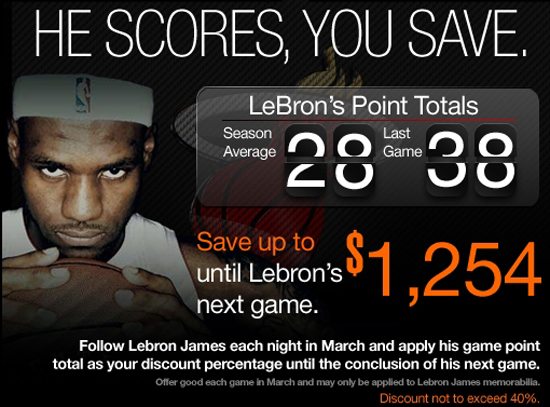 It is called the “He Scores, You Save” promotion where based on how much LeBron scores in his most recent game, you can realize some tremendous savings on his signed memorabilia from Upper Deck Authenticated. Based on how many points he scores, we will discount his memorabilia for that percentage (up to 40%) until his next game on orders placed on the Upper Deck Online Store at checkout.

And LeBron started off the promotion in grand fashion last night against the Portland Trail Blazers netting 38 points for the Heat. That means you have until the start of the Utah Jazz game tonight to score a HUGE discount on his signed items. Unless you think he will score more than 38 tonight, which he most certainly could…

Until game time tonight, you can score this signed LeBron James piece for 38% off!

So what are you waiting for? Take a look at some of the awesome LeBron James memorabilia that has been deeply discounted because of his performance last night. Add it to your cart and proceed to checkout to see what your price will be with the whopping 38% discount. 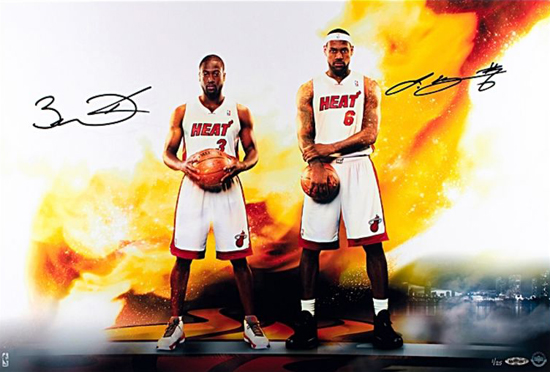 Even dual signed LeBron James items with Dwyane Wade are available for this promotion!!!

And if he is named NBA MVP and scores his first title, as our friends in Vegas believe he will, and prices on his memorabilia shoot north, will you be smiling because you bought in March or will you be saying to yourself, “I woulda, I coulda, I shoulda?” This promotion is being offered as a way of thanking our loyal fans for this month only. Don’t let it pass you by!