There is not much more exciting or frustrating than having one card left to complete a trading card set. Especially when the card in question surfaces about as often as Moby Dick. Such is the case with our featured collector for President’s Day; D.J. Patterson. And we are hopeful our massive fan base around the world can help him out to find that last card and complete a very impressive set. Here is his story:

“My name is D.J. Patterson and my quest for the 2009 Goodwin Champions memorabilia set started when I bought my first blaster and pulled the Chone Figgins memorabilia card. I had just recently gotten back into collecting after almost a 10-year absence. Drawn by the unique design of the ‘M’ swatch, I decided I would see if I could find more of these cards. By week’s end, I had managed to get 11 from local retail outlets and a friend had scored three for me as well. I looked up product information on your website and found there were 98 cards in the set, so I knew I had my work cut out for me.

“I checked eBay and was able to get majority of the set for quite cheap as some sellers had several of what I needed. I think I was able to pick up 13 cards I needed from one guy for around $20. I was also was able to set up some trades through some sports cards web pages. Most collectors are really helpful when they know you are working on a master set. 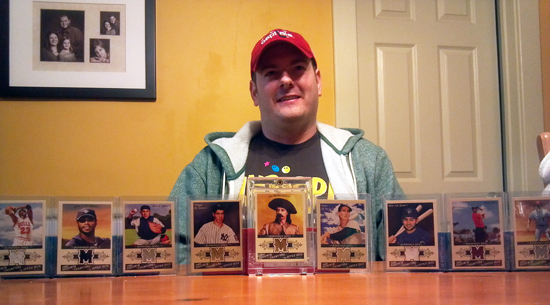 D.J. Patterson is on the hunt to put together the 98 card 2009 Goodwin Champions memorabilia set.

“I had seen a few of the Molitor cards on eBay, but I had always been outbid at the last minute or found myself without reception when auction ended. After about two weeks, I managed to secure one when the auction closed early in the morning and luckily I was awake to grab it. And then there were two. All I needed now were the two most elusive cards in the set; Lyndon B. Johnson and Buffalo Bill Cody. 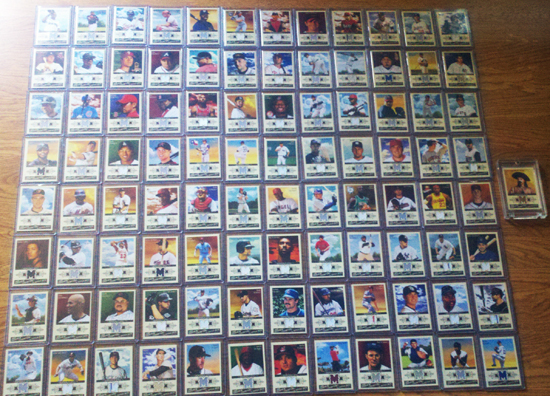 He has amassed almost every card, with the exception of the elusive Lyndon B. Johnson card.

“I checked eBay religiously to find them, often several times a day to no avail. I had friends checking around for me as well, but still nothing. Then I read in Beckett that the Buffalo Bill Cody card was a redemption. All I could picture was some kid pulling it out of a pack and tossing it away thinking it was a filler card. About a week later when I checked eBay, there was Buffalo Bill!

“The seller had it up with Buy It Now (BIN) or Best Offer (BO). What came from there was me sending offer after offer, repeatedly being told my offers were too low and then I heard nothing more. I had friends send offers, but they were stonewalled as well. Finally, I bit the bullet and paid for what he had it listed for. To this day it is still the most I’ve shelled out for any individual card, but in hindsight, I think I have the only one that has surfaced, possibly only one in existence since redemption ended this past August. (NOTE FROM UD: All five Buffalo Bill cards were redeemed and sent out) 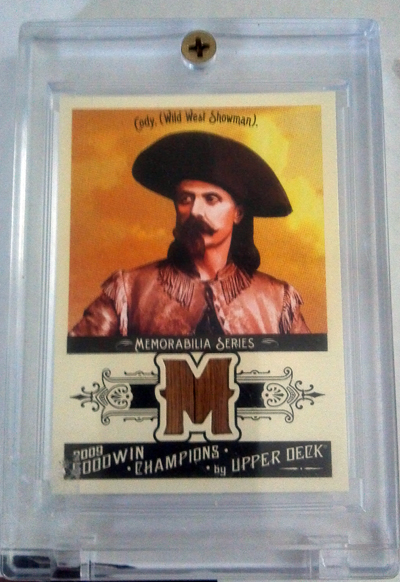 This is a card you just do not see very often, one of just five copies in the whole world.

“The next week I was in Martinsville, Virginia visiting my parents and stopped by the local card store there. I was telling the owner Wes, about my continuing search for the elusive Lyndon B. Johnson card. He offered his help since he goes to several card shows a year. Every time I go in there, he asks about it. Sadly I always have to tell him I am still on the hunt. He says he never has luck at card shows either, but will continue to search.

“And that’s where I am. I have compiled almost everyone of the most comprehensive memorabilia card series of premium athletes and personalities, but have not been able to score that final card. Can someone help me find LBJ?!?!” 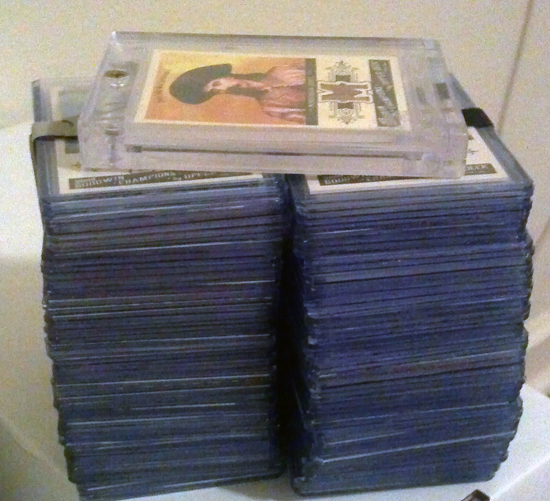 Here is a stack of his 97 cards. He's just missing one. Can you help him track it down???

When we found out about D.J.’s quest and lack of luck finding the Lyndon B. Johnson memorabilia card (featuring memorabilia from a coat he wore), we went back through our production notes and confirmed we created these cards and that they did indeed pack out. The trouble is there are only five in the entire print run. To make things harder on D.J., you don’t see a lot of listings for insert cards from a product that is three years old. As we said in the beginning though, we are hopeful our fans can help. If you’ve seen or are in possession of a 2009 Goodwin Champions Lyndon B. Johnson memorabilia card, please reach out to D.J. and let him know! His contact information is listed below:


Good Luck DJ, I hope you find one!


Good luck DJ!! I was working on both the auto and GU sets for this but ended up throwing the towel in. Hope you pull it off


Good Luck DJ, I know the feeling and atleast UD is helping. I worked for years putting a master set together for 2007 UD Black baseball, but couldn’t get any help form UD on compiling a complete list. To this day I’m about 40 cards short of a master set(best guess). Atleast you are down to 1 😀


Hey Josh
Please check out http://collectorrevolution.com/
They have a great group of collectors that may be able to help, as well as a Collection Match Maker service on their site. Joining is free and easy. Please feel free to use my referral code if you would like 8dcbd9
Best of luck in your hunt. I will put the word out for you wherever I can.
-Kurdawg19


I have the card you need to complete your set of 2009 Goodwin Champions LBJ GCM – LY . If you want it make me an offer. There is one other guy looking to purchase this card. Right out of the pack and into the case . This card is in Mint condition. Handled once . And that was from the pack to the case. Good Luck Dantre


Do you still have that LBJ Mike? I know this is an old thread, but thought i would give it a shot


Update – as of 12-19-13, the set is now COMPLETE! A guy from Philly contacted me mid-November with news that he had the card. We were able to work out a price and now the card is mine and the search is over! A little over 4 years.

Thanks to everyone thats had their eyes oopn helping me look.