Recently we got back in some cards that we issued redemptions for since they were for a multi-signed card and not all the athletes had signed when 2011 Parkhurst Champions Hockey released. Now I’ve worked for Upper Deck for over 14 years and I collected cards before that as well. So I’ve seen quite a few cards in my days. But in my humble opinion, this may be the greatest retro hockey card of all-time. Take a look and I challenge you to tell me it is not. 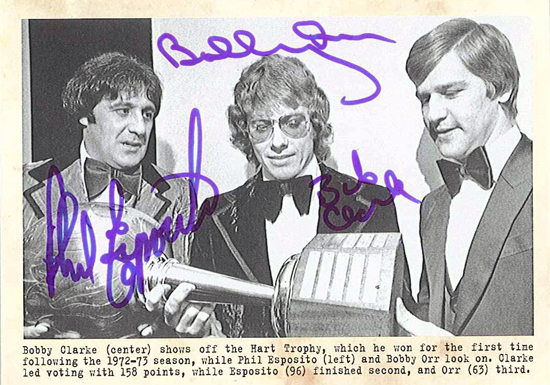 Now I suppose you could say that it is hardly a hockey card at all because the players aren’t even in their uniforms. To me that is what actually makes this card so great. It is just so different. To be frank that is what makes a lot of the wire photo cards in this set so awesome, many photos are from off the ice and they just show the athletes in a different light. I mean look at the bow ties on these guys, those are amazing. It just reeks of ’70’s coolness. And check out Bobby Clarke‘s shades. “Ponch” from “CHiP’s” doesn’t even have glasses that cool.

I love the look Phil Esposito is giving Bobby Clarke and Bobby Orr as well. Like he’s saying, “Bobby you’re not going to carry this thing around all night are you? People can’t even see my best tuxedo when you’ve got this in the way.” It is just so funny.

And what makes it the best is that it is hard-signed by all three of these amazing legends. Just fantastic.

These cards will be shipping out to customers who have them pending on their account soon. That will be a great Upper Deck Mail Day for those lucky collectors!

The wire photo concept was very clever. Adding hard-signed autos made it that much better.


The wire photos and wire photo autographs are on of the all time best hockey inserts. Well done guys!


YOu are right it is fantastic…it captures a moment in time …these
greats had no idea what lay before them…….