Every year we have a great time at the NHLPA Rookie Showcase where Upper Deck has the opportunity to spend time with the top NHL rookies. One of our goals we have leaving the event it to come up with a fun way to introduce the new rookies to fans and for the last few seasons we have done that with our Rookie Boot Camp videos which have been pretty popular with hockey fans around the world. After all, one of these players will likely end up being the next big Upper Deck rookie card, so fans should get to know them. 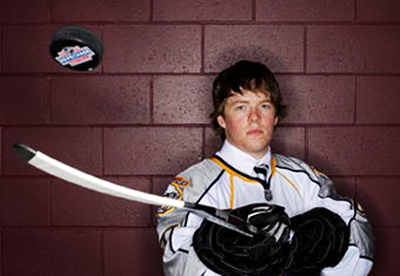 Ryan Ellis who was recently called up by the Nashville Predators is the lead character in UD's new Rookie Boot Camp video.

And fans of these videos will have a whole new series of videos to enjoy throughout the course of the season with the second video launching today. After two successful seasons, Upper Deck put Coach Ron Cherry on the bench and brought in Coach Dewey Schuntz who is widely regarded as the worst rookie in NHL history. It was our hope he could teach the players what not to do and we think he did a great job. Watch this second video where Coach Schuntz works with Ryan Ellis of the Nashville Predators to help him get better managing his money. Also, look for two small cameos from Jake Gardiner of the Toronto Maple Leafs and Marcus Kruger of the Chicago Blackhawks.