Each month Upper Deck spotlights one of its valued collectors to showcase their collection or pursuits. The great thing about sports collectors is that they are all very different in what they collect, how they collect. With Marvel fans getting more and more excited about the release of The Avengers movie this summer, there seems to be renewed interest in a product Upper Deck released this summer called The Avengers: Kree-Skrull War. Assembling this set required patience, problem solving skills and a key comic eye; which are all attributes John Stever possesses. Here is his story:

“I have been a Marvel comic fan for close to 40 years now and I bought my first trading cards 35 years ago. For over a decade I wasn’t really interested in either. Then one day I went into a Toys “R” Us in search of football cards for one of my younger brothers and I discovered Marvel cards. Sure, I bought the old Marvel sticker cards back in the ‘70’s, but these new cards had fantastic art. I bought some packs of the Marvel cards for two of my other brothers and one for myself. Well, before I left the parking lot all the Marvel packs were opened. My wife and I were instantly hooked. We’ve bought all the Marvel sets from the ‘70’s to present day. 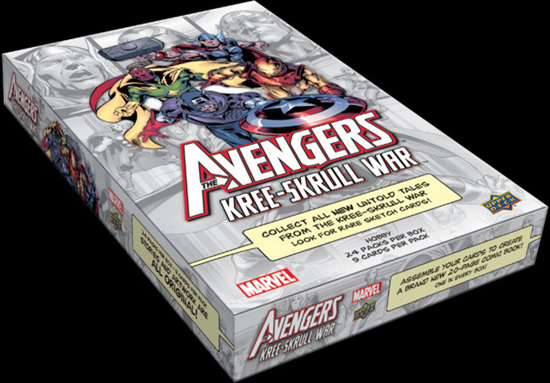 “So naturally when Upper Deck announced The Avengers: Kree-Skrull War series, we had to have it. It seemed like it would be difficult to put together and there were not the same ratios for pulling rare inserts like sketch cards like in other UD sets, but I got three boxes figuring that I would be able to get an entire set of the story from that.

“I opened the boxes immediately when they arrived and realized this was a different kind of Marvel set where you are basically putting together the story yourself. The album would be a big help in doing that so I sent the redemption certificate for the albums in right away. I was pretty busy last summer, so I put off collating a set.

“While it did take awhile for the album to arrive, I was happy when it did as it drew me back to the cards. I finally sorted out my cards and found I was short 21 cards. I posted my want list on the NSU forum. I traded for 19 cards I needed and another forum member gave me the last two to finish off the set. During my first attempt at sorting I found I had extra character and retro character cards. I gave many of the triplicates to my nephews and nieces. After a long search on eBay, I was finally able to pick up a sketch card for a reasonable price since I didn’t pull any. Their rarity is keeping the price quite high. 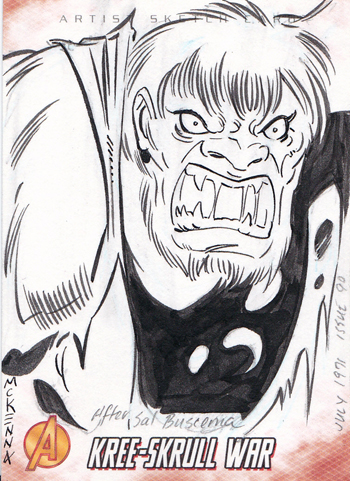 “When the 19 cards arrived I figured it was time to put them into the albums. Thinking there might be too many, I stared backwards. The comic cards were a perfect fit. The album comes with the nine promo cards that I left in, which where the same cards being given away at select conventions last year. There was no room for the character cards, the retro character cards, and the cover cards; which is unfortunate. I will probably put mine in with my Marvel Beginnings cards. 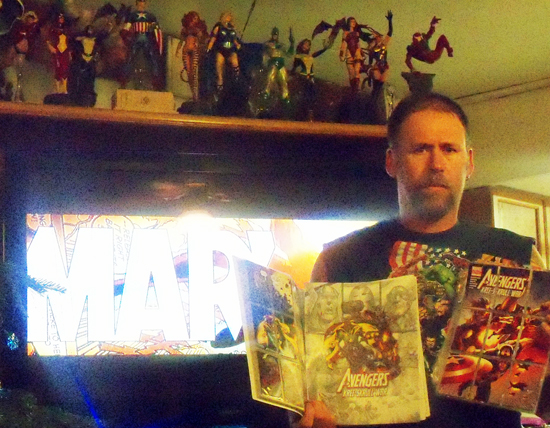 “The comic book compilation cards are a neat idea, but not for everyone. The cover cards are nice. I really like the art in The Avengers: Kree-Skrull War set. Last, but not least, I love the character and retro character cards.”


I just wanted to comment that while the binder is nice it is worthless for holding your cards. Who is going to just want the story without at least one cover? Most people that collect want the whole set, yet there is no way to store the complete set in the binder.

Next time make it a traditional binder where we can add pages, or at least add enough pages so we can add every available card in the set (plus 1 extra for sketches, etc).