It was a year ago today that every sports fan tuned in to watch a regular season NBA game. It wasn’t because the game was thought to be necessarily all that competitive, but because it was the first time LeBron James would return to Cleveland as a member of the Miami Heat. The media attention around the game was unbelievable.

With the spotlight shining bright on LeBron, he performed in a big way by scoring 38 points on his former team while grabbing five rebounds and dishing out eight assists. In an effort to help bring fans closer to the game, Upper Deck scored the shoes LeBron wore in that game, had them autographed, authenticated the signature and offered them up through Upper Deck Authenticated’s Suite One-of-One program where extremely high-end sports collectibles are available for purchase to our worldwide fans. Earlier this week, almost a year to the day of the big game, the shoes were sold to a private collector. 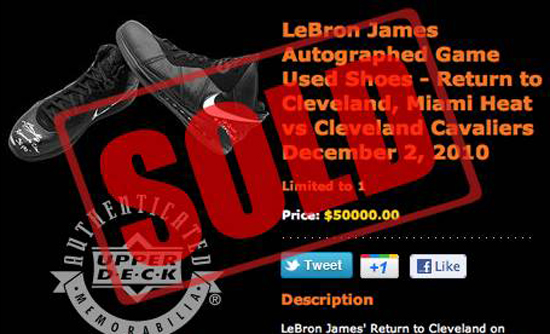 The next big ticket item heading to Upper Deck Authenticated’s Suite One-of-One program is Landon Donovan’s game-worn uniform from the MLS Cup. We have a signing session coming up this month where Landon will sign this highly collectible (and highly aromatic) garment, UDA will authenticate the piece and it will be offered up to collectors through the program. Additional unique items like Michael Jordan Motorsports motorcycles, hand-painted and signed art along with other LeBron James signed game-worn shoes are currently available through Upper Deck Authenticated’s Suite One-of-One online store.