Collector of the Month: Josh Carter Loves His Longhorns

Each month Upper Deck spotlights one of its valued collectors to showcase their collection or pursuits. The great thing about sports collectors is that they are all very different in what they collect, how they collect. Upper Deck is the exclusive provider of collegiate sports cards and we have seen that some collectors prefer collegiate cards over cards of the pros. As we have learned more about these customers, it is important for us to help get them closer to the game.

Recently we hooked Nick’s Sports Cards up with some tickets to a University of Texas Longhorns game. They awarded them to a very passionate UT fan who had never been able to attend a game before. He was thrilled to be able to take part to say the least and having purchased several boxes of Upper Deck’s new University of Texas Football cards, he certainly deserved an experience like this. Here’s what he had to share:

“My name is Josh Carter and I am a die-hard Texas Longhorns fan. I guess I started collecting UT cards back in 2007 at a shop in Grapevine, TX. My buddy Trey who was working at the shop game me a Selvin Young autograph card, and based on acquiring that card, I decided to start my own Longhorn collection. Four years and over 450 cards later, I still get a kick out of thinking about that card sparking the fire to get me going with this. 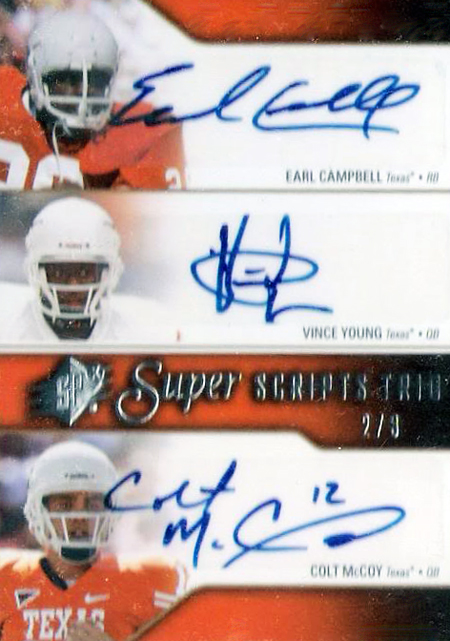 This is one of Josh's favorite cards featuring sigs of three of the greatest Longhorns of all-time!

“Now most of my collection is centered around some bigger stars like Jamaal Charles, Earl Campbell and Ricky Williams. I have some really limited cards of Jamaal Charles and Limas Sweed that are some of my favorites in my collection. Most of my collection consists of game-used and autograph cards because I usually like to give my base cards away at the shop I purchase from. It is always fun to see a smile on a kids face at the local card shop.

“Most of my “Burnt Orange” pride comes from my Grandfather who graduated from the University of Texas, I just grew up around it. My favorite players to watch with him were Ricky Williams and Major Applewhite. We watched together when the Longhorns won the BCS title at the Rose Bowl against USC. And while I didn’t have the opportunity to attend the University of Texas myself, I will always bleed burnt orange. 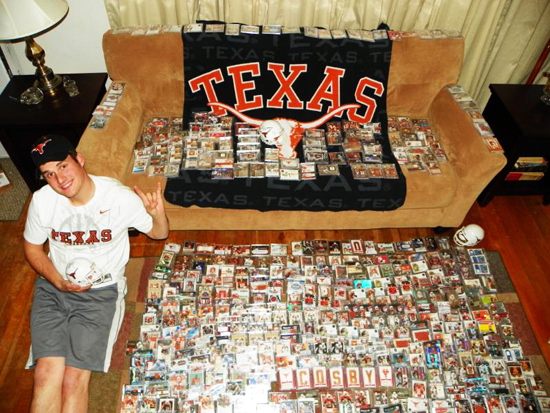 This is one SERIOUS University of Texas collection! Good work Josh!

“The funny thing is that I had never been to a game despite watching them faithfully each season. That all changed thanks to Upper Deck and Nick’s Sports Cards. I was lucky enough to get the opportunity to see the Longhorns play for my first time VIP style because of some tickets I won through UD and Nick’s. Unfortunately the Horns couldn’t pull off a comeback suffering a 17-13 loss to Kansas State. It was a close game though and that is the way I like them. Just being there was well worth it after following them on television for so long. It helped energize my passion for the Longhorns which continues to grow, much like my collection. Hook ‘em Horns!” 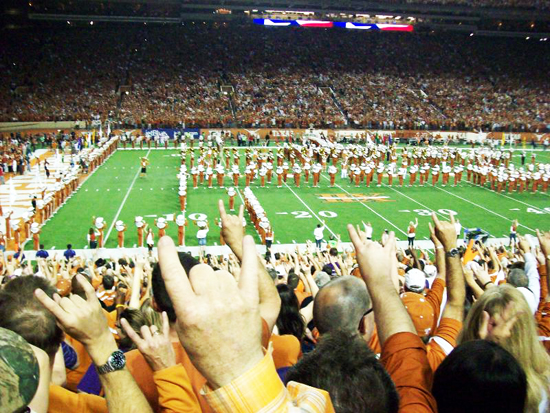 Josh and the rest of the Burnt Orange Nation cheered on the Horns this season.