Every year, the day after Halloween it seems like the tinsel comes out and we are bombarded with different holiday images from every direction. From Christmas trees to Hanukkah candles to images of Santa Claus and his reindeer, we see it all not only in person, but online as well. One of the more iconic images we see each year is the Nativity scene featuring biblical characters like Mary, Joseph, baby Jesus, the Three Kings, a shepherd, an angel and some animals.

I see them on street corners and at stores, but I have seen more and more of them online, usually shared through social media sites like Twitter and Facebook. Nowadays people are getting more and more creative with their Nativity scenes it seems, showing their passion for different things they love like dogs, Legos and even meat of all things. 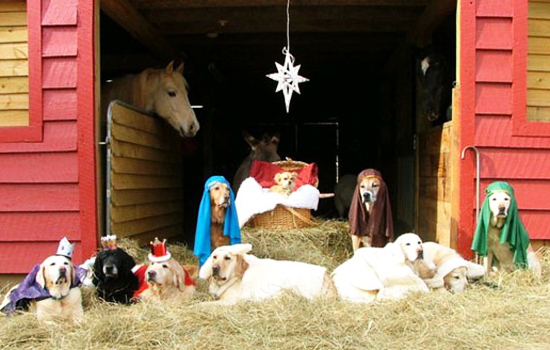 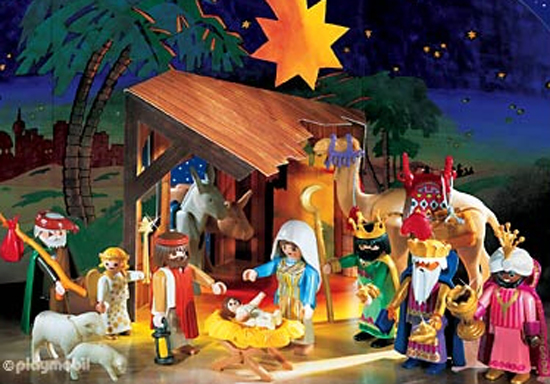 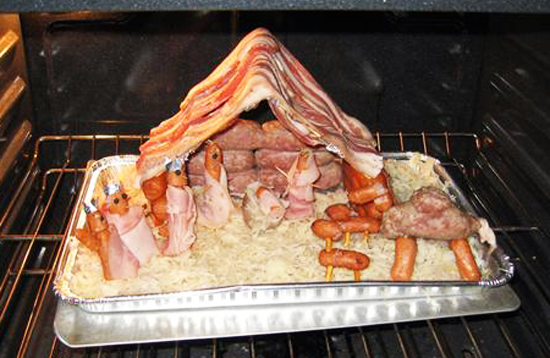 Seriously? The person who created this either needs to run (not walk) to a psychiatrist or cardiologist. Probably both...

As I saw some of these oddball Nativity scenes I thought to myself, “There should be a Nativity scene for collectors.” And as I thought of that, I started thinking of how you would do it. I was on baby duty and my son was napping so I started putting it together by looking up some card images the other night. The biggest question was which players would play each part? Here’s who I cast for the Upper Deck NHL Card Nativity Scene.

Baby Jesus – This was tough because if you think about the greatest hockey player, you immediately think of Wayne Gretzky. But he is a legend who is no longer playing. We need someone younger. And even though he has been working through some medical issues as of late, there is nobody bigger than Sidney Crosby playing these days. I thought the 2005-06 Upper Deck Young Guns Autographed Sidney Crosby rookie card would be the perfect card to play the role of baby Jesus, as long as we shrink it. 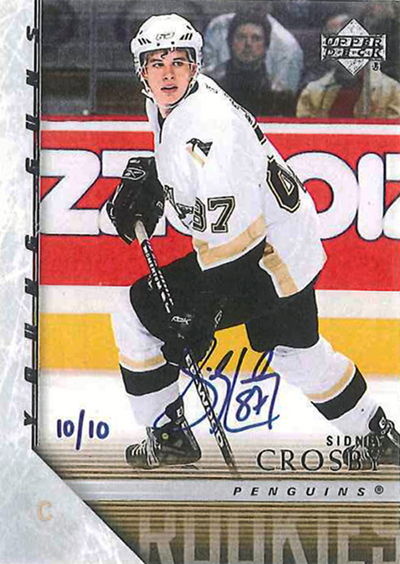 Joseph – Again I thought of Gretzky here, but it just didn’t seem quite right with baby Jesus being played by Crosby. If Sid has any “father figure” in the NHL, it would likely be Mario Lemieux. Not only do they share the same uniform and ability to score, they are good friends as well. Therefore I selected a 2011 Parkhurst Champions Renditions Autographed Mario Lemieux card for the role of Joseph. 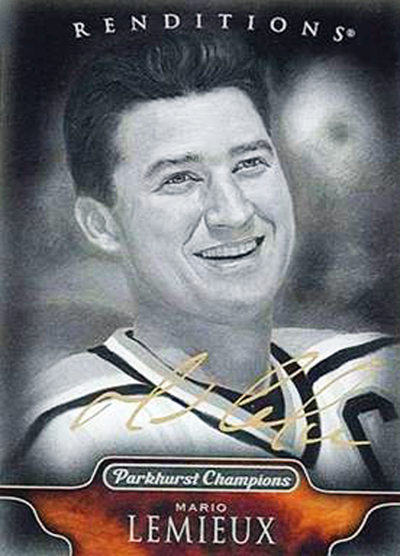 Mary – This is where it gets a little more difficult. Surely there have been a multitude of amazing women to lace on the skates, but in my opinion Haley Wickenheiser is probably the greatest. She has collected so many gold medals that even the Three Kings are jealous of her and she is as awesome off the ice as she is on. That is why I selected the 2011 Goodwin Champions Autographed Haley Wickenheiser card for the role of Mary. 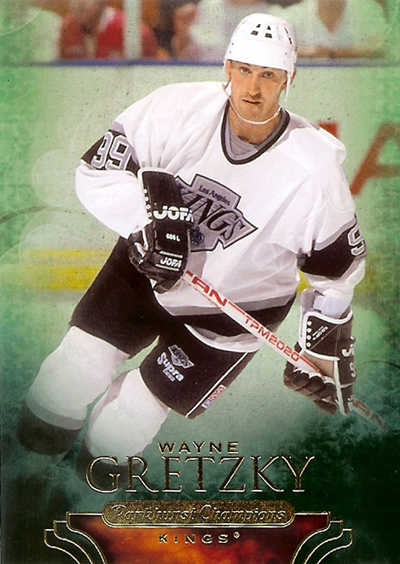 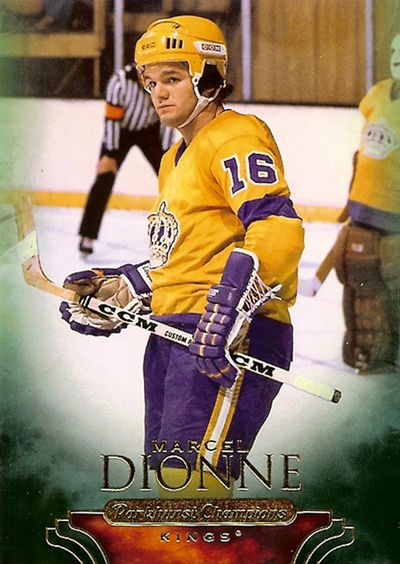 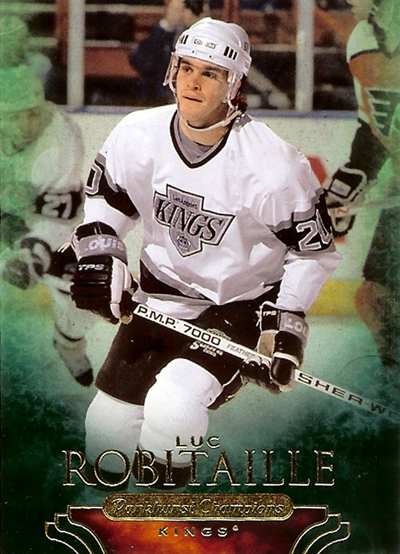 Shepherd – Initially I thought of Don Cherry for the role of the shepherd, but then I really tried to think of someone who has helped shepherd players to great success. I couldn’t think of anyone better than Scotty Bowman who led his teams to nine Stanley Cup victories and a multitude of other successes. I chose the 2005-06 Upper Deck The Cup Stanley Cup Titlists Autographed Scotty Bowman card to play our shepherd. 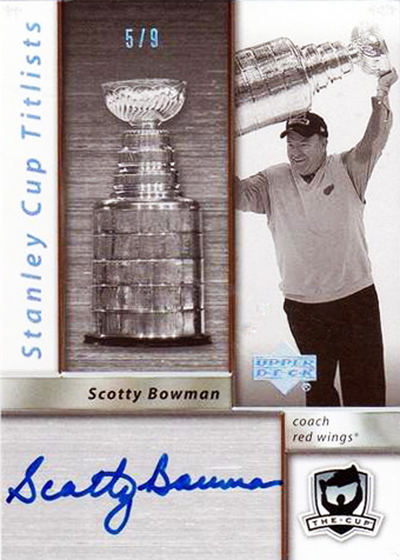 Angel – This was another tough one, but as I thought about the great ladies of hockey, I thought Cammi Granato would be an excellent star to have shine as our angel. Don’t get me wrong, I was tempted to plug in a girl from one of the NHL Ice Crew teams, but thought better of it. I went with the 2011 Goodwin Champions Autographed Cammi Granato card for that spot. 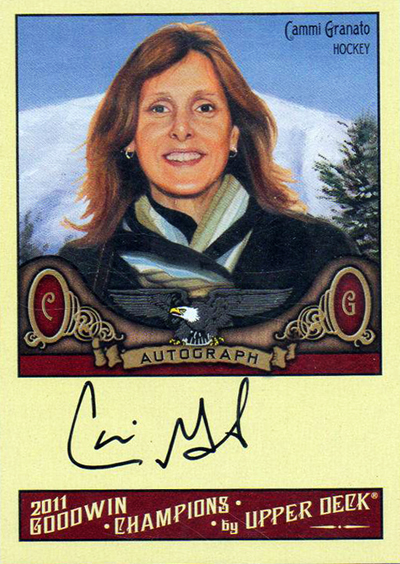 Animals – I went back and forth on this. Should we include cards of “animals” on the ice like Milan Lucic and Sean Avery? Seemed to be in bad taste (at this point I was thinking maybe this whole idea was). Maybe a mascot like our friend Bailey from the Kings? Nah, what’s a lion going to be doing in a Nativity scene? I even toyed around with using some of the 2011 Goodwin Champions Animal Kingdom Patch Cards, but they just didn’t look right. In fact, it was starting to get weird and as my son started waking up from his nap, I thought maybe it would be best if we just left a regular old sheep or donkey in there. 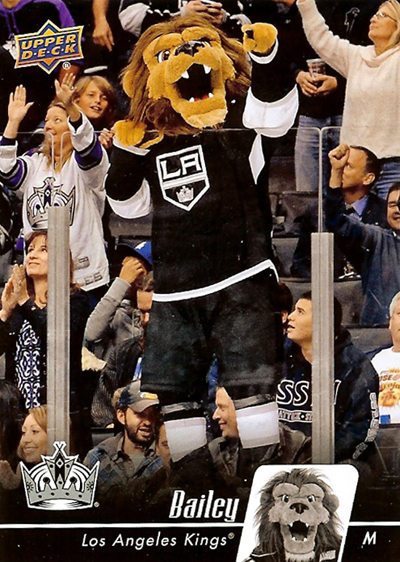 Sorry Bailey, we couldn't make a place for you in this Nativity scene.

So with the cast set, I shared the card images with one of our designers the next day at work. He quickly flipped me back a completed version on my vision of a Nativity scene for Upper Deck NHL collectors. Here it is puck fans, I hope you enjoy it and from all of us at the Upper Deck Company, we hope you have a wonderful holiday season! 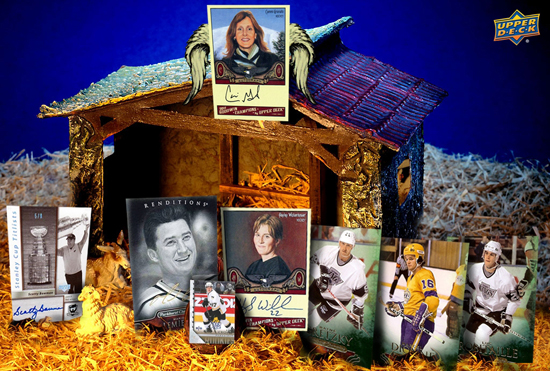 
Loved the above…best wishes to one and all for a healthy and prosperous 2012. Take care and GOOOOOOOOOO Duck’s–even looked good last night. Dick “The Hitman” 🙂


very creative Chris! Happy Holidays to you as well!


LMBO! Only UD makes their customers part of the family! Thanks and have a great 2012!


wow… Crosby YG with a auto… OMG Never seen one before…