What is the Weirdest Thing Gordie Howe has Signed?

Last week Upper Deck attended the 2011 Fall Sports Card & Collectibles Expo in Toronto. We had a lot of fun interacting with customers and watching them pull great cards or assisting them with adding a great piece of memorabilia to their collection. Adjacent to the Upper Deck booth was the autograph pavilion where fans could get autographs of NHL legends like Ray Bourque, Doug Gilmour and Gordie Howe to name a few.

While Upper Deck currently has an exclusive deal for signatures with Gordie Howe, it does not extend to memorabilia. We watched as Mr. Hockey himself signed a variety of memorabilia items for fans as we went about our work at the booth. And then I saw something that made me scratch my head. This progression of pictures will take you through what I witnessed. 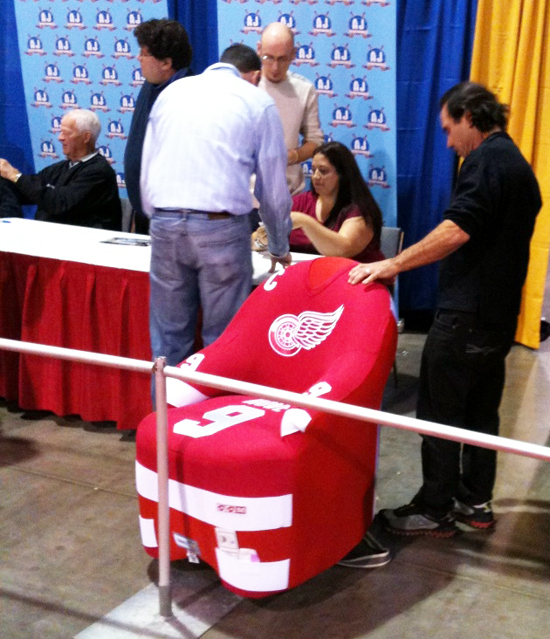 My first thought when I saw this was, "What's he going to do with that? Take a picture of Gordie sitting in it?" 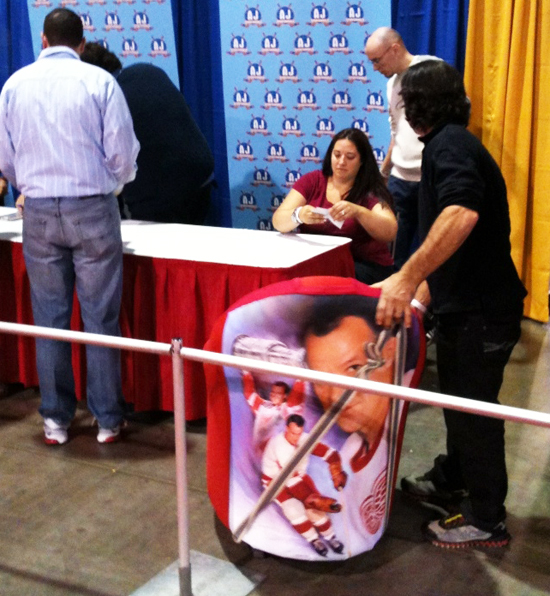 They were reviewing the ticket as if saying, "Yeah, I guess we can do this."

He almost tried to place it on the table. That would have been awesome! 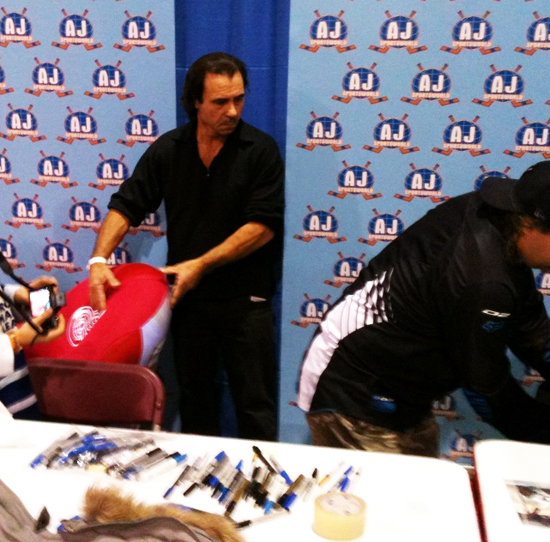 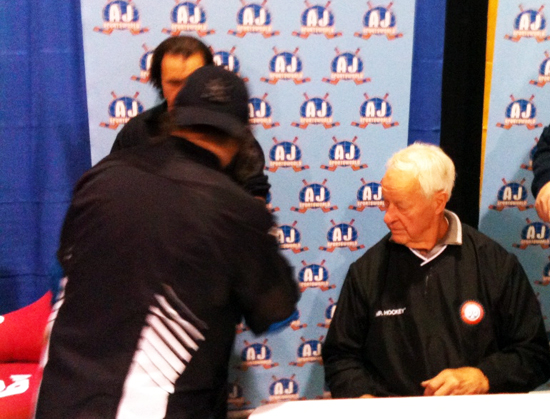 This could be one of my favorite pictures ever. I would love to know what is going through Gordie's mind here...

Another great shot of Gordie processing this unique request. 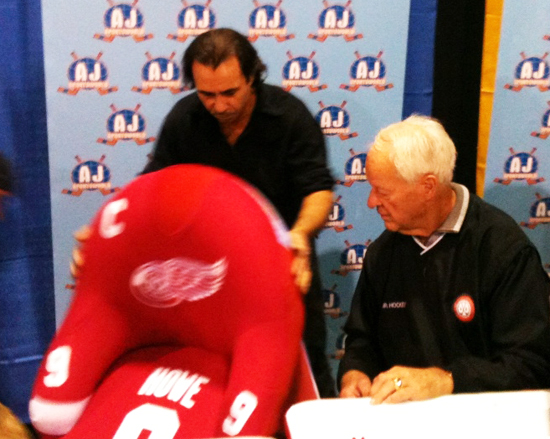 Where would be the best place to sign? We were hoping on the big 9. 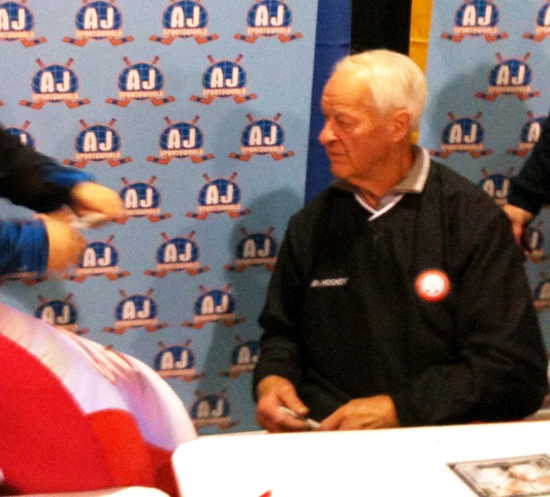 The new furniture sharpie is guaranteed to keep a signature on all your favorite chairs for years. 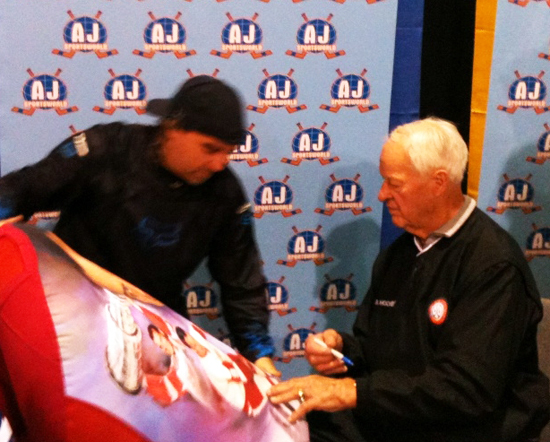 Some last minute direction for Gordie. 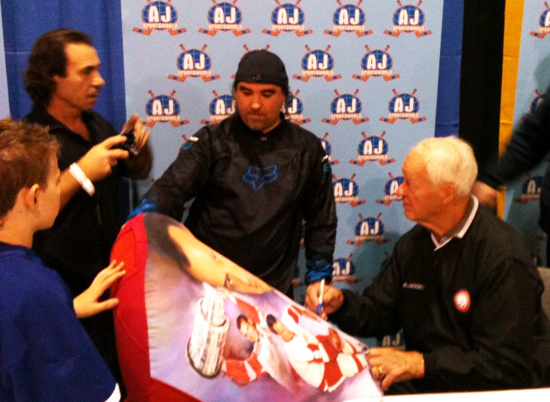 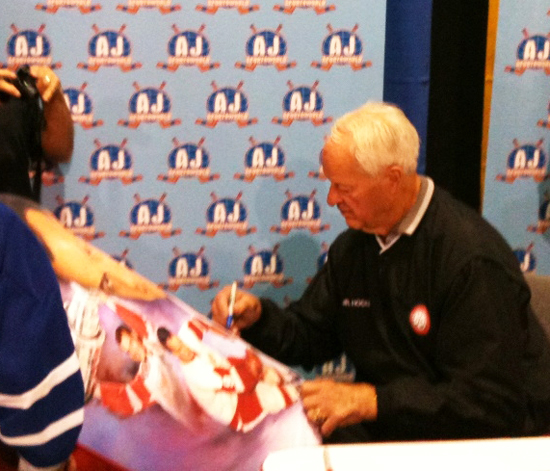 And now this chair has become a collectible! 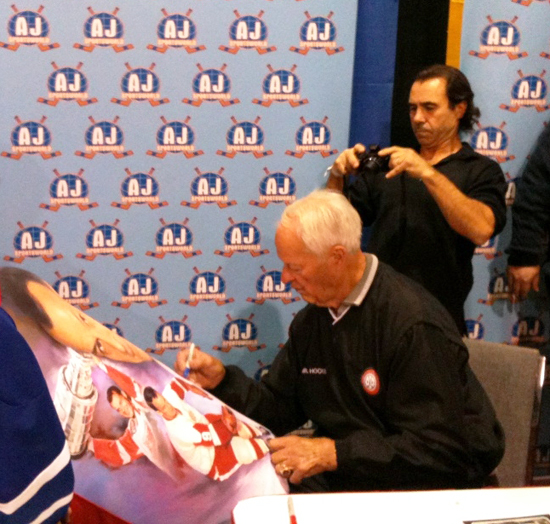 Grab some pictures in case anyone asks about the authenticity of the chair. 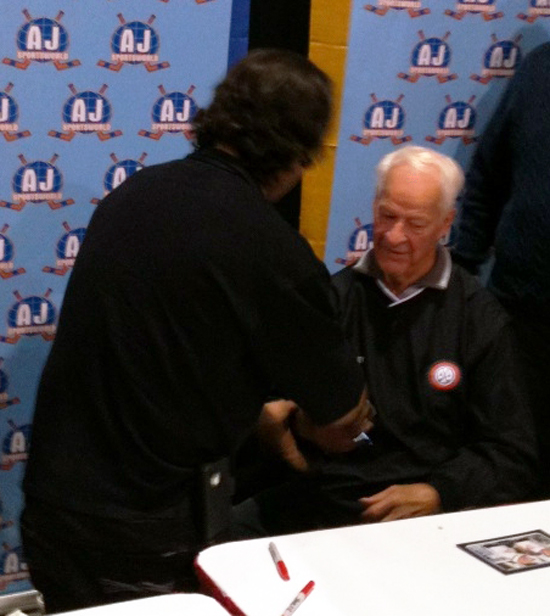 And a final handshake with the centerpiece for his man cave signed. Now the only problem is how to get it home in the Prius...

While this may not be the weirdest thing Gordie Howe has ever signed, it has got to be up there in my opinion. It certainly does make a unique collectible however, until the first time he spills something on that chair…


Great blog post, ano interesting read, thanks for sharing this from the expo.


Anyone know where I can buy a chair like that?

The gentleman in the photos is Joe and he is the creator of the chair and he actually made that chair by hand! In fact he can make a custom chair featuring the jersey of any player or team you’d like.

He decided to have this custom Gordie Howe chair signed as it is part of his personal collection which also includes custom chairs similar to this one signed by Bobby Orr, Alex Ovechkin, Mats Sundin, Nazem Kadri and a few others. Search for Chairs R Us or ProPlayer Chairs on the web and you’re sure to find them!