Marvel Slingers™ Are the Hit of the Chicago Toy & Game Fair

Upper Deck recently shared news about the exciting launch of Marvel Slingers, and since then it has been talked about on a number of popular entertainment sites including MTV and ICV2. It really is a product that consumers need to get into their hands to appreciate, which is why the Upper Deck team took the show on the road for the official debut of Marvel Slingers at the Chicago Toy & Game Fair. Once kids got the product in their hands, they couldn’t stop slinging. 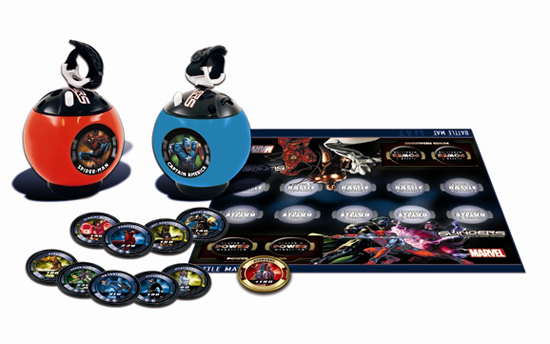 The Marvel Slingers Battle Packs were big sellers at the show and have everything players need to get started with the game.

Situated in the center of the hall, the Slingers booth was one of the most sought after destinations at the show. Many consumers saw Slingers on the local news before the show even opened, and had to check out the new product for themselves. Kids and parents alike filled every inch of the booth, practicing their Slinging technique and skills. An enthusiastic group of girls set up camp in the Slingers booth and worked on their trick shots, while the boys battled it out for a cool new Slingers shirt. 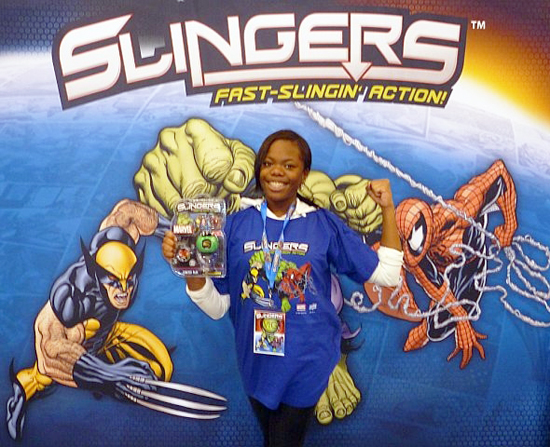 Tournament winners were thrilled with their prizes.

The tournaments had wait lists and the sales counter was a flurry of activity. The show exclusive – The Slingers Battle Pack (2 Slinger box set) – sold out just 5 hours after the show opened. Slingers Starter Packs flew off of the shelf, with Captain America selling out first – he was a clear favorite with the girls – and Spider-Man and Hulk close behind. Thor, Wolverine and Iron Man were also popular choices.  Parents stood in line to purchase 2 Starter Packs and a Medallion Booster, since more medallions equal more fun. 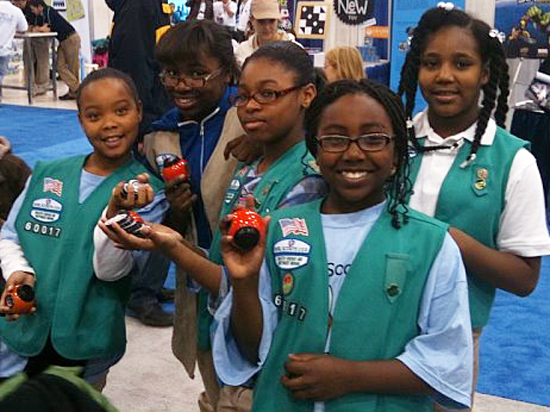 The scouts all went crazy over Marvel Slingers!

On Sunday morning, Boy Scouts and Girl Scouts took over the hall. They battled each other and then protested when their troop leaders tried to get them to move on to see the rest of the show. The weekend went by in a flash, and even as the lights were dimmed as an indicator the show was over, folks rushed over to buy the last few Slingers we had left and play with them for just a few more minutes. 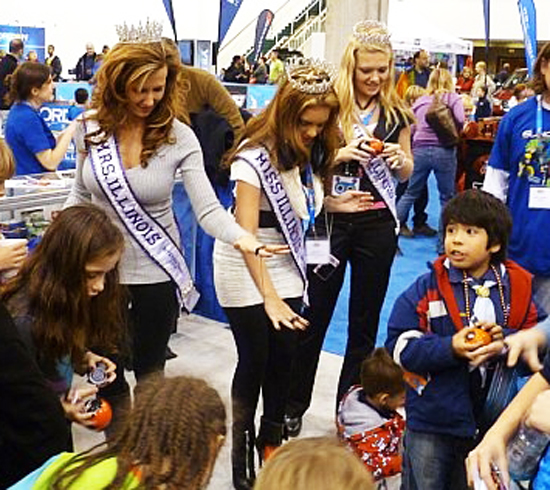 Media loved it when the beauty queens started slinging!

Local Chicago press, including WGN, CBS Chicago, ABC Chicago and The Rosie Show previewed and promoted Slingers during their TV newscasts starting on Friday before the show even opened.

Derrick Young from CBS Chicago proudly wore his Slingers “VIG” (Very Important Gamer) badge during all of his interviews, and at the end of the day personally called to ask us if he could “Please Please Please” have a Slinger for his nephew. It was the one and only toy he wanted from the show. Another newscaster from ABC came back to the show on Sunday with her boys, just so that they could play with Slingers and sign up for tournaments. She wound up purchasing Slingers for all of the boys in her family. 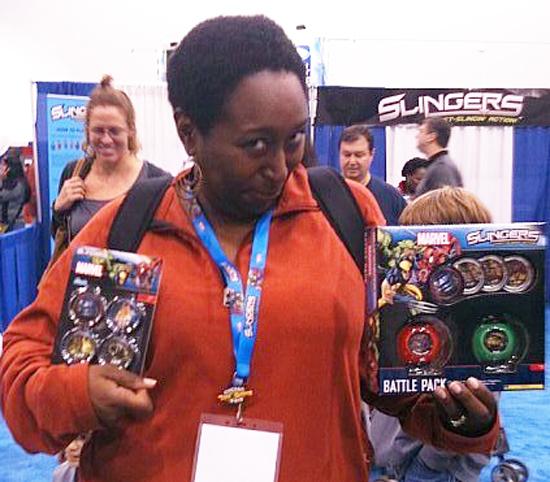 Mommy Bloggers loved the idea of putting Slingers under the Christmas Tree.

ChiTAG also attracted close to 200 Mommy Bloggers for the event. We presented Slingers to this incredible group on Saturday morning, and offered up a challenge for the Fastest-Slingin’ Mom at the show. The moms loved it and they posted some great Tweets about us over the weekend:

”Holy cow, my kids went to sleep with their Slingers last night! You guys were a big hit with the bloggers too!”

“Looking for the hottest new game this season? Check out Slingers and remember you saw it here first!” 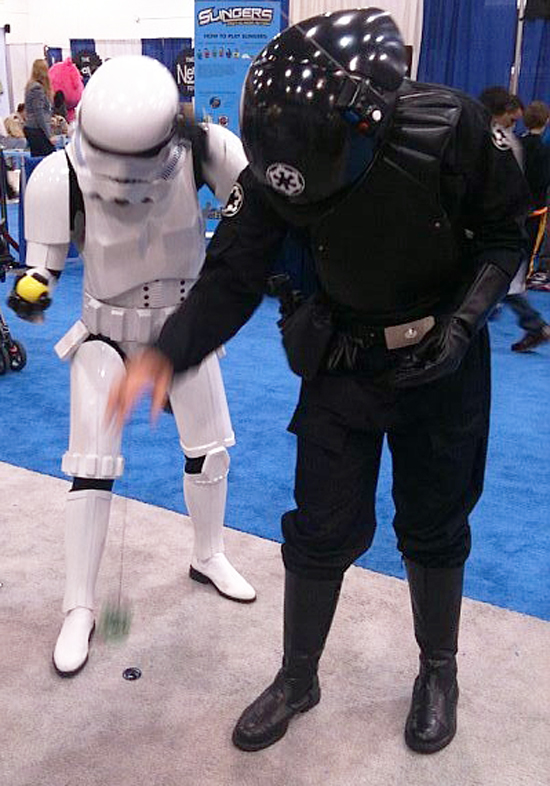 Even the Emperor sent his Imperial Storm Troopers to seize some Slingers for him.

So how do you get your hands on the must-have toy of the holiday season? You can pick the Slingers Starter Pack and Medallions up exclusively at your local Toys “R” Us retail location, or order the Battle Pack, in addition to these 2 other products, direct from Upper Deck by clicking here. And if you are already a fan, make sure you “like” the Slingers Facebook page and follow us on Twitter.Slingers America is now on YouTube as well where we are challenging our fans to show us your best trick shot. Check out some our team put together recently: