Listening to your customers is a great way of delivering them a product they want and will enjoy. We recently solicited feedback from our fans on what moments they would like us to capture for the first ten cards in the 2011-12 NHL Biography of a Season set. This set is ONLY available through Upper Deck Certified Diamond Dealers that opt into the program so check with your shop today to confirm they will carry the set. If they are unaware of the promotion, they can check with our Authorized Hobby Distributors for information on the set. There will be a different card available as a gift with purchase to hockey fans for each week of the hockey season starting in November.

Our fans came through in a big way helping us develop the checklist for the set. Here are the first ten cards that will be featured:

BOS9 – Mike Modano – Retires as a member of the Dallas Stars as requested by Upper Deck fan Brian.

Thank you to everyone who took part in that process to help us make this the best Biography of a Season set ever! We have also finished the design for the set and we think fans will love the high-end feel the cards will have this season. Take a look at this mock-up card of the design for the 2011-12 NHL Biography of a Season set (Note: Staal is used as an example and will not be included in the first series of ten cards). 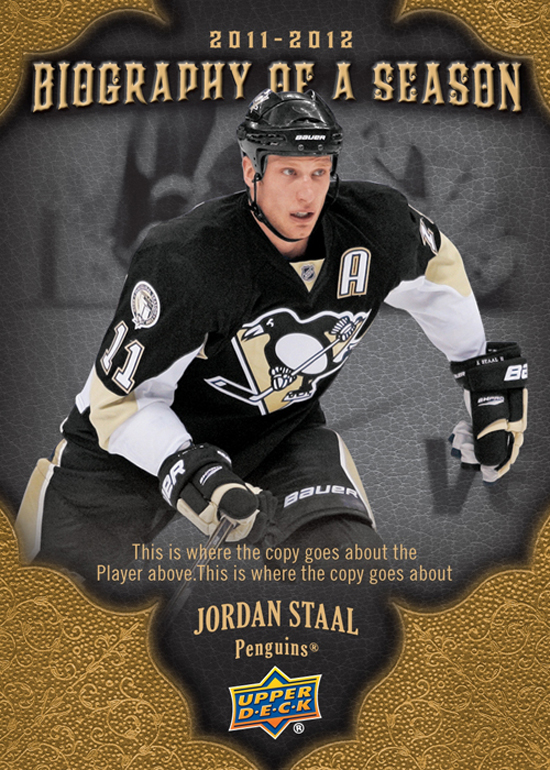 The design for this season's set gives the cards the look of an ornately decorated book which is appropriate since we are telling the story of the season.


Unfortunately, due to a variety of issues, we will be unable to produce card #10 and it will be replaced with a card of the first game in Winnipeg.