Cast Your Red River Rivalry Vote; Which School has the Better Football Program?

The atmosphere at the stadium for the Red River Rivalry is really like none other in all of sports. Half of the stadium is burnt orange and the other half is crimson. This weekend both teams have a ton on the line as they look to add another chapter to one of the best college rivalries in the nation. Oklahoma will look to assert themselves as the true #1 team in the country by taking down Texas, but the Longhorns are much improved and there is not better place to make a statement than in the Cotton Bowl. 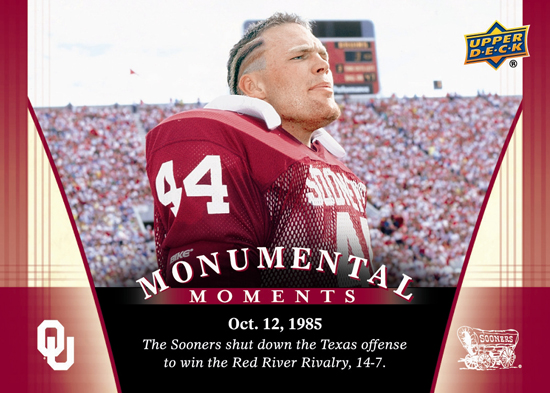 Upper Deck's University of Oklahoma set will recall "Monumental Moments" like the impressive defensive showing by the Sooners in 1985.

Upper Deck chronicled some of the “Monumental Moments” from past Red River Rivalry games in the company’s new University of Texas and University of Oklahoma football trading card products. Both will hit store shelves in early November and we are interested to see which product will outsell the other. With both programs having such a storied history, there are plenty of great moments and players fans can use to lend merit to their argument about which team has the best program. 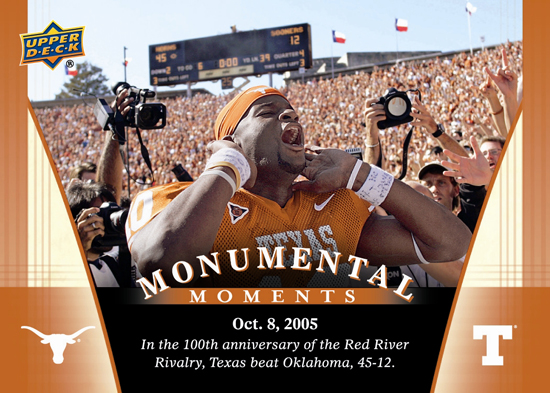 Upper Deck's University of Texas set commemorates "Monumental Moments" in the Red River Rivalry like Vince Young's stellar performance on the 100th Annversary of the series.

Let us hear you defend why you think the Sooners are the better program or why you feel the Longhorns are the best collegiate program for your chance to receive a blow-up card from the new set of Colt McCoy or Sam Bradford. Just submit your comment right here on the blog and we will randomly select one Texas and one Oklahoma fan on Monday to receive these two larger than life cards. Good luck college football fans!

Don't miss your chance to take home one of these awesome oversized cards just for sharing which school you think is the best in the comment section below.


By far the Boomer Sooners are the best out of the two!!! Sam Bradford and the Rams will beat Colt McCoy and the Browns any day of the week!!! 🙂


Everything is bigger and better in Texas! Plus most of OU team is made up of players from Texas! Texas is the better football program and Colt McCoy is much better than Sam Bradford.


Texas. On the rebound plus they have the most recent national title between the 2 programs. Texas State Fair – What a setting!!!


The University of Oklahoma far superior to the college at texas. 7 national championships says it all


Oklahoma is easily the best.

Oklahoma has had more championships and better players.


Only Red River rivalry that I’m aware of is between Univ. of N. Dakota and NDSU…


Man this is tuff one. They both have great programs that put a lot of guys in the NFL and you can bet that one of this teams will be a national contender every year. I am going to have to go with Texas. They are in the middle of rebuilding and are right back in the major bowl picture after a rough year last year. And they are the second winnings collegiate football program of all time so cant go wrong with them.


Gonna have to go with Texas, I hate the State, but they Know football better than anyone!!!!


Has to be the oklahoma sooners!! look at the player lineup in the new upper deck card sets!! sam bradford (future star!!) adrian peterson (dont need to say more), Barry Switzer great coach , Billy Sims amazing , Bob Stoops, another great coach, brian bosworth and many more!! not to mention the are ranked in top 10 just about every year!!


Sam is and was the man! The Sooners have incredible spirit, they never give up and they define Oklahoma: leaders, proud of their history, and winners!!!


Definitely the Oklahoma Sooners. One of the most storied programs in college football history, with 7 National Championships and 5 Heisman winners. People don’t talk about the OU programs of the past without mentioning the famous Wishbone formation. You can’t mention Sooner football without talking about the legendary coaches who helped former teams to greatness. Bud Wilkinson, Barry Switzer and now Bob Stoops. The Sooners still hold the nations longest win streak, a respectable 47 games without a loss. Love ’em or Hate ’em the Sooners have been and will continue to be a dominate force in college football.


Oklahoma, overall and at the moment


Congrats to Bryan and Tim for being selected to receive these blow-ups!


Congrats to the winners!!