It’s not easy trying to innovate a 2 ½ x 3 ½ piece of cardboard, but it s a challenge we embrace at Upper Deck. Coming out with the next big thing is something we are constantly chasing and we’ve seen some good responses to new trading card innovations through the years like SPx Shadowbox cards, Masterpiece Art cards, Evolution video cards, Marvel Ultimate Panel Focus cards, Entomology cards and more.

Along the way Upper Deck has created some card sets that are not exactly the “next big thing,” but they are extremely popular, primarily because they are different. Such is the case with the 2011 Goodwin Champions Animal Kingdom patch cards. We thought this playful insert would be perfect for the Goodwin Champions set because animals were important subjects in the original vintage set. To bring them to market with a new twist was the challenge, but working with a vendor we came up with some fantastic patch cards to pay tribute to each creature.

We have been excited to see these cards are capturing the imagination of new collectors, young collectors and female collectors. While we certainly understand and appreciate these cards are not for everyone, especially the die-hard sports collector, there is no disputing the fact they have value and there is a base of collectors eager to collect them. There are a lot of fun elements to chase in this 100 card set and we thought it would be fun for fans to see a completed set of the cards, check it out!

Additionally, as the market starts to dry up on some of these cards, we wanted to share that the last three cards that make up the extinct and mythical portion of the checklist do in fact exist. They are out there in packs of 2011 Goodwin Champions and likely will command a huge premium if sold in the secondary market. Here are scans of the actual cards for the Saber-Toothed Cat (No. AK-98), the Chupacabra (No. AK-99) and the Do-Do Bird (No. AK-100). 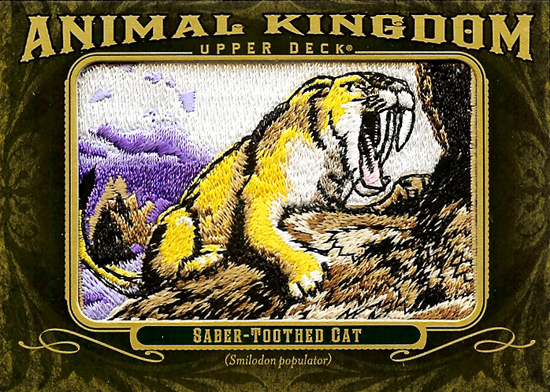 Card #AK-98 is the Saber-Toothed Cat and is VERY difficult to track down. 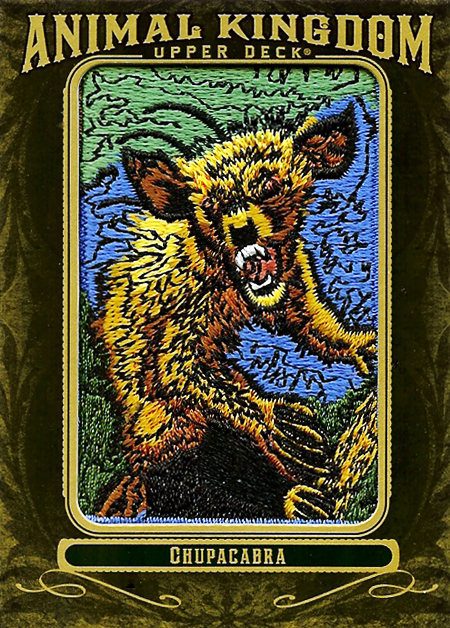 The Chupacabra is a mythicical vicious little creature at card #AK-99. 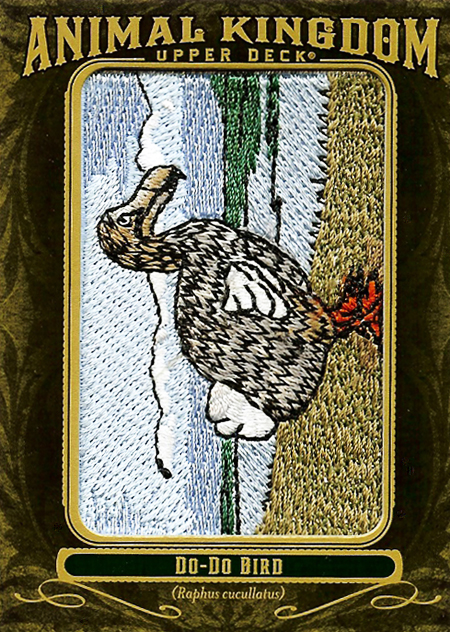 The Do-Do Bird is the final card in the set and even though it is a horizontal patch, the card has a vertical design. Was that a mistake or were we just having fun with the Do-Do? We'll never tell...

Are you putting together the set? How far along are you and which cards are you having the toughest time tracking down?


Someday I’ll work on this set when I have the funds to do so (rent > cards right now), but I was pretty happy to have pulled the AK78 Giant Panda back the first week the product released! I even got offered $50 right away online when I posted about my pull, and I had the good sense to turn it down. It’s a really nice set, and anyone who has the means to collect all one hundred cards should consider themselves proud of the accomplishment.

I’m trying to complete my collection. I was wondering if you’re interested in selling some of your rare ones. If so let me know what you have and what you’re willing to part with. I check the blog regularly if you want to leave your contact info.


Wow!! What an amazing collection!!!


This is an awesome set and really quite unique I may add….at first I looked at this set as okay but after I had pulled my first one (The Amazonian Manatee)I was then really taken with the design… the threads used added a shimmering effect to the card and the details were outstanding….One thing I will say about Upper Deck they move with the times and have been bringing us the collector a wide variety of very unique cards that have been well thought out and are very collectible from these Animal Kingdom cards to Museum pieces,Entomology and so on …..these cards have left me at times in awe…. Thank You Upper Deck!
Sincerely,Ernest


You have to wonder how the other manufacturers don’t interact with their customers/collectors like Upper Deck does. These blogs (along with the creativity and value delivered) set them apart.


The Chupacabra is epic.