Is Boomer Sooner the ringtone on your phone? Do you wish Ben & Jerry’s would make a Crimson & Cream flavored ice cream? Do you affectionately call your car the Sooner Schooner? If you answered yes to any of these questions, you are going to love the new college football trading card product coming out this November. Through Upper Deck’s exclusive agreement with the Collegiate Licensing Company, the trading card company will be producing a standalone trading card product commemorating the storied history of the Oklahoma Sooners Football program. 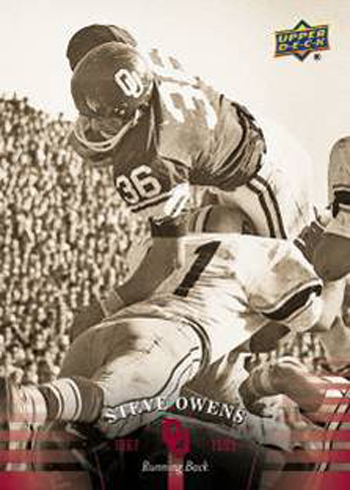 The 100-card base set will also includes 20 “Monumental Moments” cards that capture those special moments that gave Sooner fans goose bumps through the years. From the 47-game win streak in the 1950’s to the 1974 National Championship victory over Oklahoma State on to unforgettable Red River Rivalry games; Upper Deck compiled all those memories for Sooners fans. 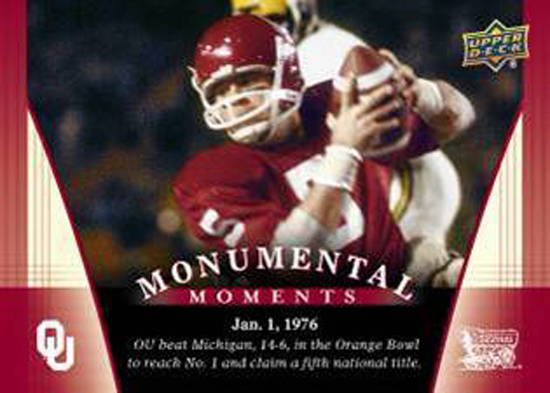 This is the most comprehensive University of Oklahoma Football set ever assembled. Each hobby box will contain one autograph card from an Oklahoma great, and two special light F/X Oklahoma Icons inserts! Every box is loaded with cards of 192 Oklahoma legends (24 packs with 8 cards per pack)! 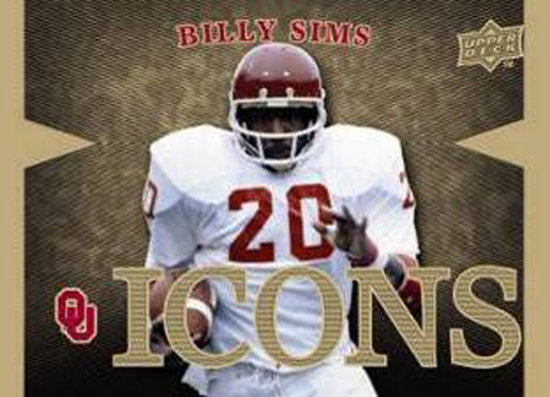 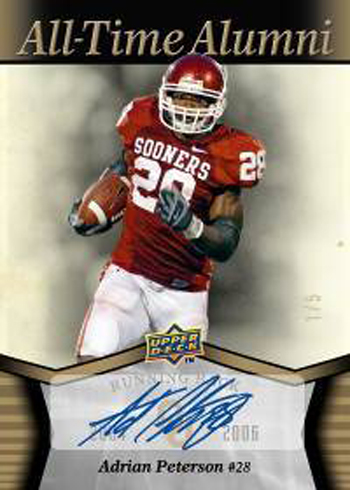 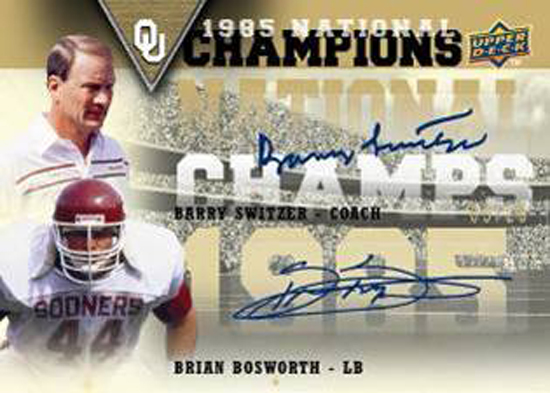 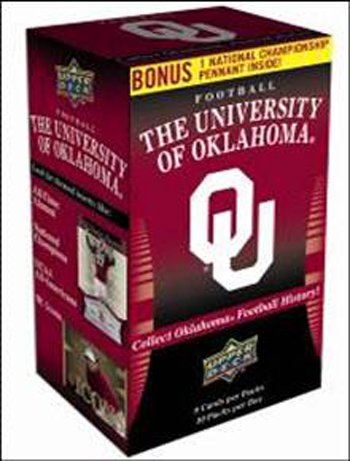 But how do you get your hands on your Upper Deck University of Oklahoma Football boxes? Well first you need to be a little patient. The product is currently scheduled to hit store shelves on November 8, 2011. If you are an Oklahoma fan, call these Upper Deck Certified Diamond Dealers who will be loading up on the product:

Or you can purchase through the Upper Deck online store or through our network of Authorized Internet Retailers. Enjoy and go Sooners!


Have been collecting this set, great cards UD!! Phil, maybe they couldn’t get auth. for those players, i know i was hoping for a vessels card too lol


Sooner fan since the 47 game streak. Just started collecting this set when a dealer used a few of them as padding – Phil Grove is right – great set but waaaaay too many omissions – what about Prentice Gautt, Joe Don Looney and Marcus Dupree and no Vessels, Mildren and no Bud? That’s like no Bear Bryant in a Alabumma set


Along with the omissions mentioned above, there is significant error with card #42. Card #42 is supposed to be Steve Sewell. However the photo is not Sewell. Sewell was #13 all four years at OU (’81-’84). The player in the photo is wearing #3. In ’81 and ’82, #3 was worn by Barrion Walker, a DB. In ’83 and ’84, #3 was worn by Derrick Shepard, a WB in ’83 and a SE in ’84. I think this photo is Derrick Shepard. I think this error is a great disservice to one of the most underrated OU players of all time and probably their most underrated running back ever. As nice as this set it is, it could have been so much better.