Upper Deck is Handing out Michael Jordan Autographs this Weekend

A recent story told how after Babe Ruth, Lou Gehrig and Mickey Mantle; Michael Jordan is the most frequently forged autograph in the sports collectibles industry. We have shared before the perils of trying to get a signature of MJ in person at an event, it can be really tough. For close to two decades, Upper Deck has been the exclusive source of signed collectibles from Michael Jordan. And this weekend at the National Sports Collectors Convention in Chicago, Illinois, fans are getting the opportunity to take home prized autographs of Jordan, courtesy of Upper Deck.

Some are just finding rare autographs of Michael Jordan in random packs of Upper Deck Basketball cards. Check out this beauty featuring MJ and a variety of other legends of the hardcourt pulled by a collector at the show from UD’s new 2011 All-Time Greats Basketball product. 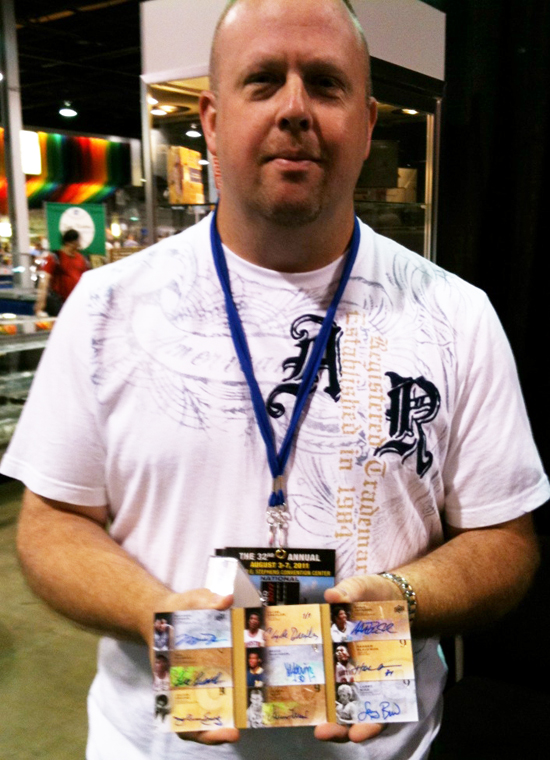 What a lucky guy! 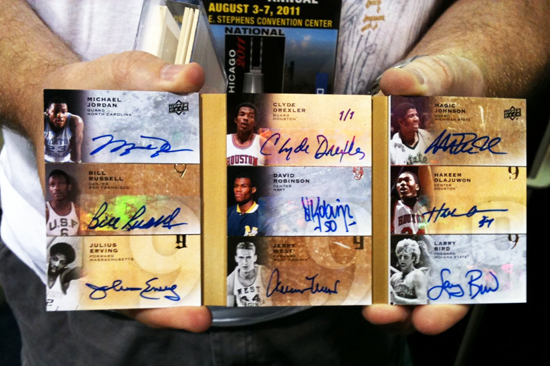 Some autographs or Jordan are available to fans for practically nothing at the Upper Deck booth. For collector who take part in our wrapper redemption program, they can receive a free pack of exclusive cards we produced just for the National Sports Collectors Convention. Hidden randomly in some of these packs are autographs of several top stars, including Michael Jordan. Take a look at some of the happy collectors who have been lucky enough to receive a pack with a Jordan autograph inside. 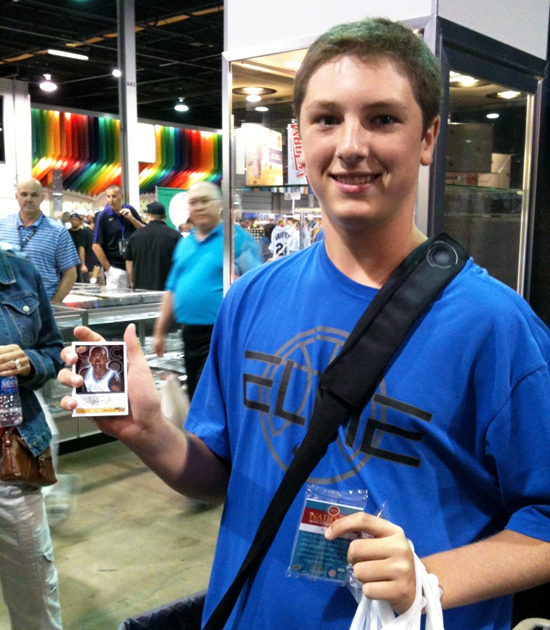 All smiles after discovering a Michael Jordan autograph card in his pack! 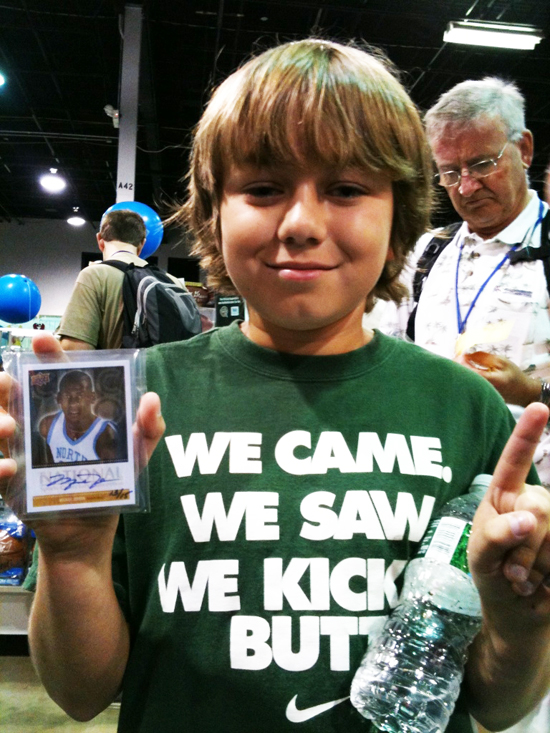 His shirt says it all!

The last way to receive an autograph of Michael Jordan this weekend is to just purchase a box of Upper Deck’s new North Carolina Basketball product at the show from a Certified Diamond Dealer. They will give you a raffle ticket that you can submit at the Upper Deck booth. Tomorrow night we will draw from those tickets for a variety of great prizes, including an Upper Deck Authenticated signed Michael Jordan University of North Carolina jersey. That’s right, we’ll just be handing it out to a lucky fan at the show! 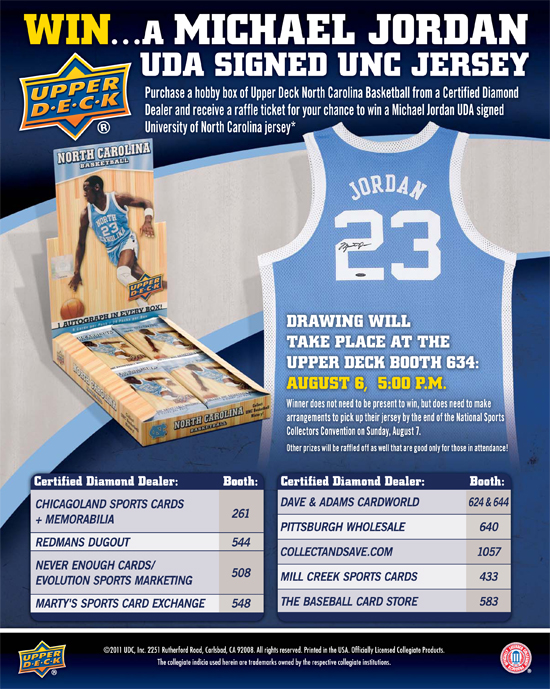 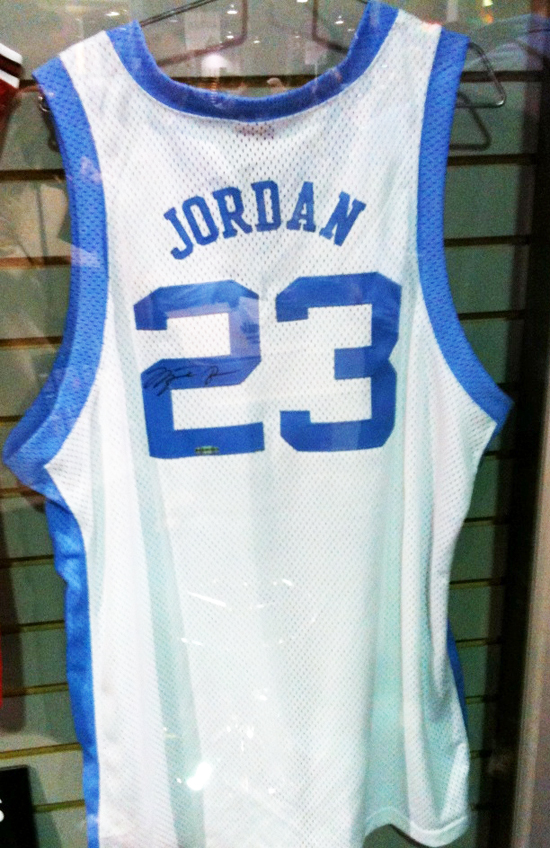 Will you be the lucky fan who takes this amazing jersey home Saturday night? 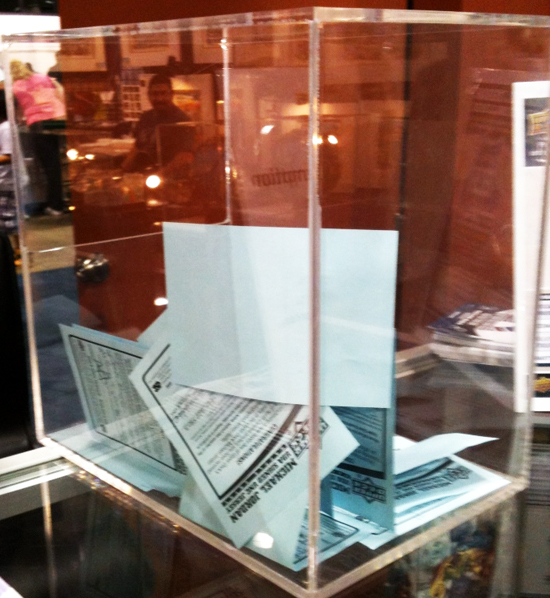 Not too many entries submitted so far, the odds of winning look pretty good!

If you’ve always wanted to pull a Michael Jordan autograph, this is your weekend to do so at the National Sports Collectors Convention in the windy city. Don’t miss out!


That’s great but what about us that couldn’t be there because of work and or lack of funds?? Oh well good luck all that participate in the raffle