My Internship at Upper Deck was a “Super” Experience

I’ve been working some long hours here at Upper Deck this summer, but you won’t find my name on the company roster nor am I on a first name basis with any of the athletes we work with. I was lucky enough to be selected as a summer intern for Upper Deck working behind the scenes in the marketing department. There is a lot of interest among college students to work with Upper Deck because it is really cool to get to work with a well known brand while working on sports or entertainment all day long. Last summer I worked as a camp counselor and the year before I was selling ice cream so this internship gave me a real taste at what it is like to work in an office at a “real” job.

I was relieved that I came into a situation where there were some other interns who could show me the ropes. It was nice to have a group of us to work through projects and brainstorm new ideas. This internship experience allowed me to really refine my communication skills and work as part of a team with a really diverse group of passionate colleagues. 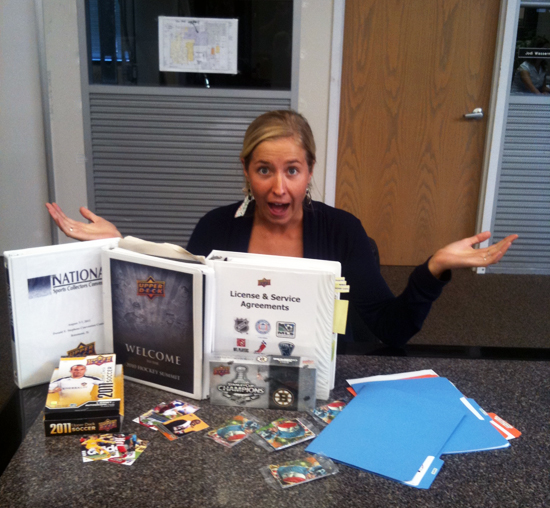 In her time with UD, Stephanie was instrumental in helping to plan for our annual Hockey Summit, UD's plans for the National Sports Collectors Convention, Soccer promotions and much more! Even she's not sure how she did it all.

In my time here I worked a lot on sports, but my most memorable experience took place on the entertainment side of our business. My fellow interns (Mark Kramer and Andrew O’Neill) decided to head down to Comic-Con in San Diego to work at promoting Upper Deck’s newest Marvel product; The Avengers Kree-Skull War. We were assigned to make a video interacting with fans opening up promotional packs of the product.

We wanted to get some costumes so we could play the part, but you would not believe how hard it is to find outfits down there during the Comic Con event. They were sold out everywhere. We should have known, but after canvassing the city we were able to track down a “Spider Girl” costume and a “Wolverine” mask. I tried my best to get the boys in the “Spider Girl” costume, but they wanted no part. We worked it out though and after we each made a trip to the phone booth, we were ready.

Our main goal was to attract comic fans by handing out Upper Deck’s Avengers Kree-Skull War promotional packs. We had the fans compete to assemble the puzzle and the winner received two packs of Captain America trading cards. It was exciting to see how competitive and enthusiastic the fans were. People were especially excited about our limited edition Kree-Skrull War trading card binder that is available now with the purchase of The Avengers Kree-Skrull War trading card box.

We had a great time meeting fanatical Marvel fans and I even got used to being in front of the camera interacting with them. It was really great for me to see first-hand the reaction fans had to the product after experiencing it with us. I really saw the value in promoting a new product through sampling. It’s a day I know that I will never forget. 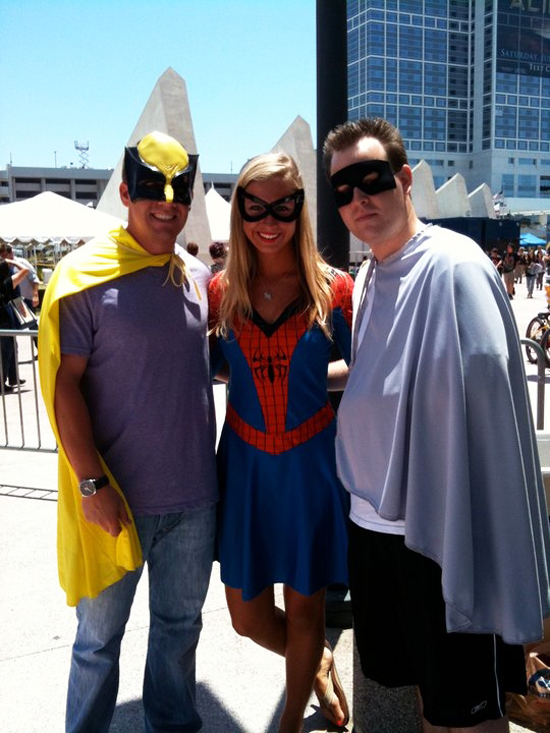 When we got back to Upper Deck the next day, it was fun to relive that experience by watching all the clips we got. And now that it’s live on YouTube, I hope it gets a good response!

As I head back to the University of Washington in Seattle, Washington for my junior year, I return with some amazing experience from working with a huge global brand. This is perfect as I was accepted into the Foster School of Business so I’ll be spending the next two years in business classes with an emphasis on marketing and sales. I can take all the experience I received from Upper Deck and apply it immediately to my classes. I want to thank all my friends at Upper Deck for giving me the chance to work with you and for allowing me the opportunity to learn from some really inspirational teammates.

Are you in college and looking for an internship with Upper Deck? We are currently interviewing for interns for the Fall 2011 semester. If you are interested, please email your resume to upperdeckmarketing@upperdeck.com.