Los Angeles Galaxy Fans Get a Kick Out of Free Cards and Meeting Landon Donovan!

One of my favorite perks of working in the sports industry is getting to go to sporting events as part of the job. Any event is fun but it’s even better when you can go for free! A couple weeks ago I had the privilege of heading north from Upper Deck headquarters in Carlsbad, California to a Los Angeles Galaxy soccer game at the Home Depot Center in Carson. It was a big day for Upper Deck as we had a large presence at this particular game. It was Upper Deck Team Pack Giveaway night, and the Galaxy were handing out special packs of 2011 Upper Deck MLS Soccer cards featuring Galaxy players including Donovan Ricketts, Sean Franklin, and Landon Donovan. The packs even included some special custom cards. Since 2011 UD Soccer released before Juan Pablo Angel moved to the Galaxy, fans received a new updated card card of Angel that was not available in boxes featuring him in his Galaxy gear. 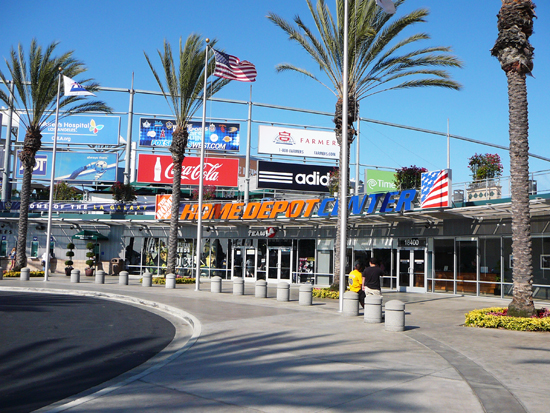 Some of you might be wondering where’s David Beckham in this set? Well, he got a card as well, but it was a special bonus card available only in the Galaxy team store. For one night only fans could purchase any Upper Deck product and receive a bonus card of Beckham to complete their Galaxy team set. This is a unique and fun promotion I’ve had the pleasure of working on with a number of teams in multiple sports. Hockey fans will remember our NHL Team Pack Giveaway from this past season which will be returning for the 2011-2012 season. We have branched out into MLS recently with similar promotions for the Galaxy and D.C. United, as well as upcoming promotions with the Philadelphia Union, New York Red Bulls, and New England Revolution. We have found this to be a great way to get cards in the hands of the most passionate fans while also sharing a special card or two not available anywhere else. If your local MLS team doesn’t have this promotion on the schedule, be sure to contact them and let them know YOU want to see the Upper Deck Team Pack Giveaway in your MLS city!

The Galaxy promotion was taken to the next level for a few lucky fans. Ten thousand packs were handed out at the game, but only 100 had a special instant winner sticker on them. Lucky fans who pulled those packs received an amazing surprise with a special meet and greet event Upper Deck sponsored with Landon Donovan right after the game! Fans who participated in the event were extremely excited to see trading cards come to life through this special opportunity. 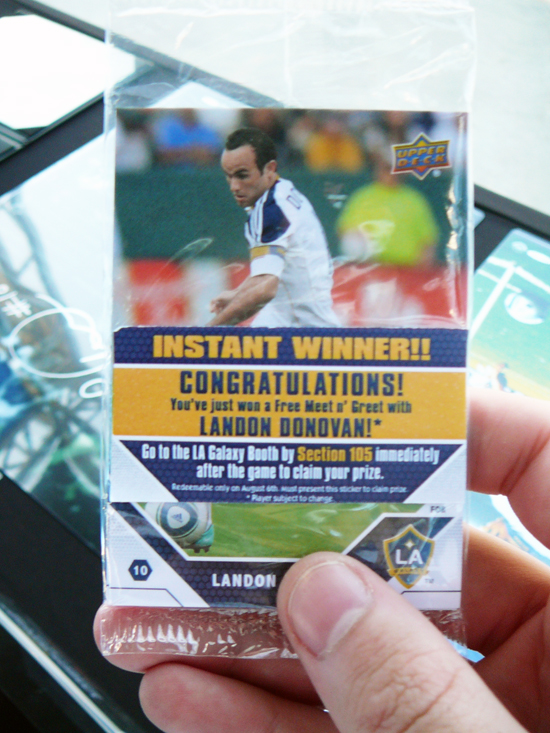 A few lucky fans got a huge surprise when they looked at their Upper Deck packs and realized they would be meeting Landon Donovan after the game!

Those who didn’t get an instant winner sticker still had a chance to meet Landon. My main job at the game was working the Upper Deck booth where we were displaying and selling some of our Landon Donovan autographed memorabilia from Upper Deck Authenticated. The booth featured balls, jerseys, and prints signed by Landon and authenticated by the Upper Deck 5-Step Process featuring a hologram serial number and certificate of authenticity. In addition to the special game night discounts on the items, anyone who bought an autographed piece at the game automatically got to join in the meet and greet with Landon after the game. It was an amazing deal that multiple fans took advantage of. 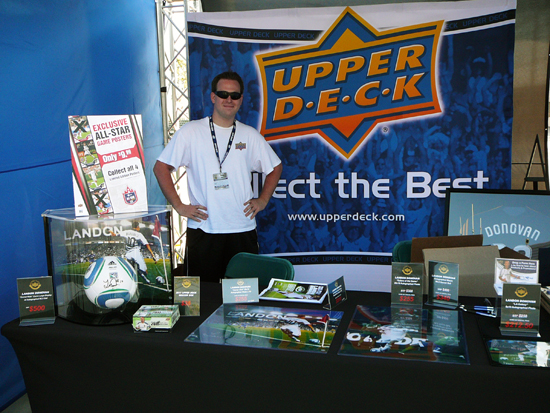 That wasn’t all we had in store for fans in attendance as we also got them in the game by producing special personalized Upper Deck cards of them. After the fun at the UD booth I managed to check out the last few minutes of the game where the Galaxy battled with FC Dallas. Dallas scored first, but after three consecutive goals the Galaxy turned the deficit into a resounding victory. After that it was off to a suite at the Home Depot Center where winners were gathering to meet Landon. Landon had to clean up and fulfill his other postgame duties so we filled the time by handing out free posters to the kids waiting in line. These special posters were blown up replicas of Landon’s 2011 Upper Deck Soccer card and many of the kids had them signed by Landon, taking home a memorable collectible from the event.

After all the fans had a chance to meet Landon, I was able to get some face time with the soccer legend and get a picture with him. This was my second opportunity to meet Landon, and he was as friendly as ever despite already having played a full game and meeting over 100 other fans. I have that photo on display at my desk at Upper Deck headquarters as a reminder of this awesome experience. 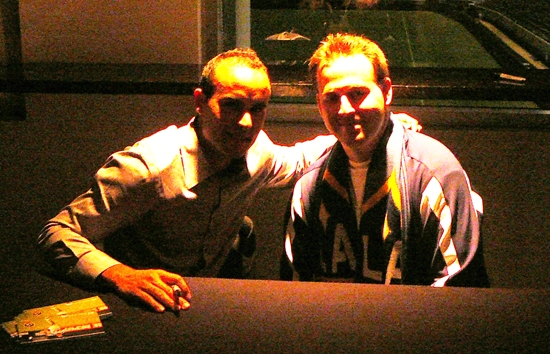 A very friendly Landon Donovan took time to sign an item and snap a photo with all his loyal fans after the game.

It was a busy day, but a lot of fun as well as we brought fans closer to the game. I’m a big soccer fan, but this was my first time at a professional game and getting some time with Landon on top of that made it even more special. If you couldn’t make it you can still get in on the action and get your own Landon Donovan autographed item. You can find autographs and game-used memorabilia cards of Landon in 2011 Upper Deck Soccer packs and check out Upper Deck Authenticated’s full line of signed collectibles by clicking here. I love my Landon Donovan autograph and I know you will love yours too!