Boston fans have been spoiled with the great play of the Boston Red Sox, New England Patriots, Boston Celtics and now, the Boston Bruins. Goaltender Tim Thomas put the Bruins on his back last season and helped lead the team to their first Stanley Cup victory since the 1971-72 NHL season. On the way, Thomas racked up just about every award possible for a goaltender including the Conn Smythe Trophy for Stanley Cup Finals MVP. 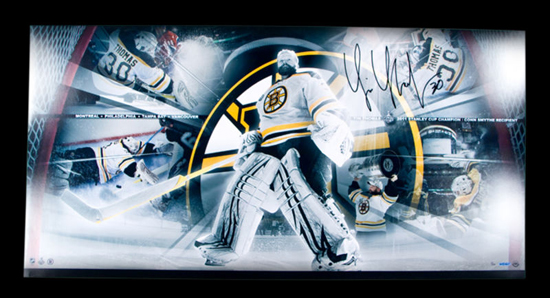 Commemorate the stellar play and Stanley Cup victory of Tim Thomas with this new UDA collectible!

And now Upper Deck Authenticated is adding Thomas to the company’s impressive stable of signers by sharing some exciting new collectibles of “The Tank” this week. Now is your chance to add authentic Tim Thomas collectibles to your collection including the limited-edition “Quest for the Cup” piece. Check out all the new Tim Thomas items by clicking here and take a look at some of the plays that make Thomas such a favorite with the NHL fans around the world.