Upper Deck’s new 2011 NCAA Sweet Spot Football set is out live today for collectors to enjoy. Behind the scenes, Upper Deck staffers were busy making moves to get all the top rookies in the set. That includes Terrelle Pryor who is currently in “football limbo” where it is uncertain whether or not he will have to opportunity to play in the NFL this season. Upper Deck was able to secure a deal with Pryor for image rights and even autographs. Collectors can find his short-printed “Sweet Beginnings” rookie card (#101) and even rare “Sweet Beginnings” autograph rookie card in 2011 NCAA Sweet Spot Football. 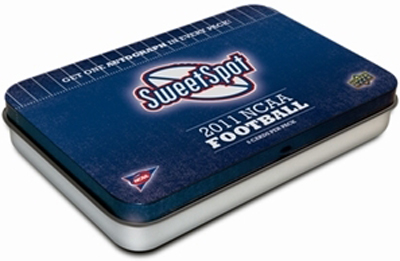 You can find "Sweet Beginnings" rookie and autograph rookie cards of Terrelle Pryor in packs of 2011 NCAA Sweet Spot Football.

It is extremely difficult to add a player to a product late in the game, but the opportunity to include a playmaker the caliber of Pryor made it worth the extra work. Upper Deck had to print Pryor’s “Sweet Beginnings” rookie cards on seperate forms and add them to the product mix so they could be inserted into packs. Since it was such a late addition we couldn’t produce as many as we would have liked to. Collectors should know that Pryor’s “Sweet Beginnings” rookie cards should be considered very rare. In fact, you could open an entire case of 2011 NCAA Sweet Spot Football and not find one.

Just including rookie cards wasn’t good enough for Upper Deck. To really make an impact we knew we had to get some signed rookie cards into the product as well. Upper Deck tracked Terrelle down where he was training with Chad Ochocinco and Antonio Brown in South Florida and had him sign for the 2011 NCAA Sweet Spot Football set and those cards were also rushed to be added into the product mix as well. Again, we were unable to get too many of these cards signed given the tight time constraints so collectors should know that Pryor’s “Sweet Beginnings” autograph rookies are some of the most limited autograph cards in the entire set. Below is an image of the card: 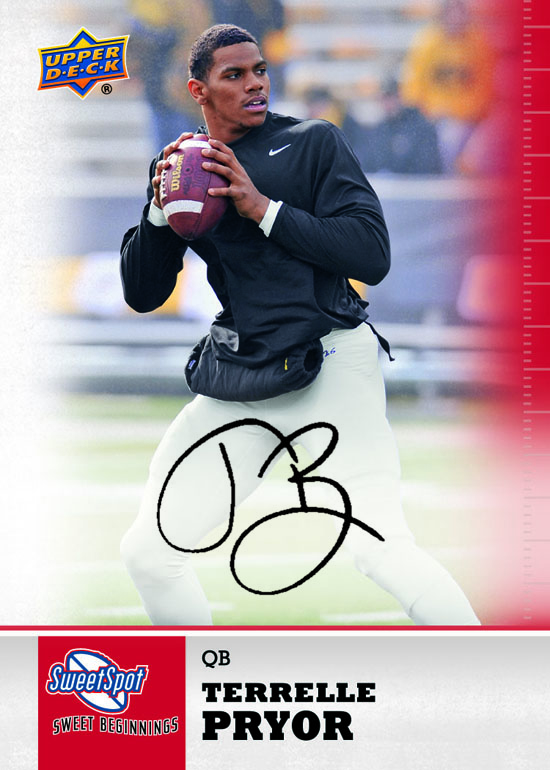 If you open a pack of 2011 NCAA Sweet Spot Football and find this card, you've found a very limited signed collectible indeed!

It is unsure what the future holds for Terrelle Pryor, but his talent is undeniable as you can see from watching his workout with Chad and Antonio in South Florida. Word on the street is that the Miami Dolphins would love to pick him up and if that happens he could position himself as their franchise quarterback fairly quickly given how badly in need they are for a competent signal caller. We wish him the best and fully expect to see him starting on Sundays soon.


My customers have started busting into 2011 Sweet Spot Football and love it. Base cards are great and autographs are awesome. We haven’t hit a Terrelle Pryor yet but have had plenty of great hits. We’ve been getting 5 Autographs per box. Is this typical?