My goal as Upper Deck’s Customer Care Supervisor is to help educate our collectors and fans so they can have a better experience with our collectible products. I’ve found that we get a lot of similar calls into our call center so it is beneficial to share what those questions are and provide answers in a public format here on the blog. You will find some really great information about our industry just by going through some of these “Ask UD” segments here on the blog. If you have questions yourself, please feel free to leave a comment and “Ask UD!”

Ask Upper Deck: I redeemed my 2010 Exquisite Football redemptions some time ago, but I haven’t received them yet, nor do I know who I will be receiving. When will I get these?

Gregg Cacioppo: We changed up the way we redeem some of these hard-signed cards for 2010 Exquisite Football to eliminate situations where customers are waiting on particular athletes to sign their cards for years. We produced less redemption cards so we could cut ties with players who are not signing in an expeditious fashion for us and begin fulfilling for collectors from the pool of cards we have received in. We now have enough cards in for some groups from the Exquisite Football product that we can begin fulfilling them. 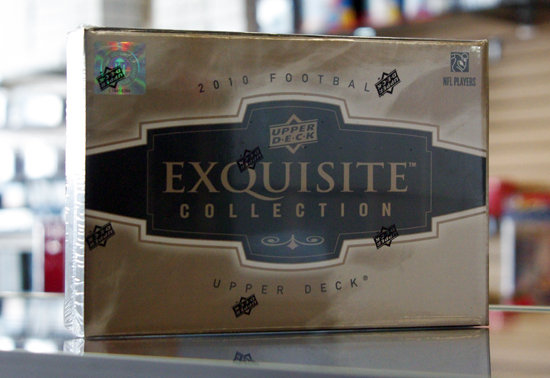 Collectors who busted 2010 Exquisite Football will start to see a portion of their redemptions shipping shortly.

These cards will be shipped to collectors at random so those who redeemed them will not know which cards they will get until that envelope arrives at their door; kind of like opening a pack. We can however share a listing of some of the players available so collectors have a better idea of what to expect. Among the players we are currently sending out, collectors may find signatures from Ronnie Brown, Tony Romo, Ben Tate, Bo Jackson, Mark Sanchez, Matt Ryan, C.J. Spiller, Jahvid Best, Ryan Matthews, Bernie Kosar, John Capelletti, Charles White, Dan Marino, George Rogers, Jack Ham and Garrett Graham. 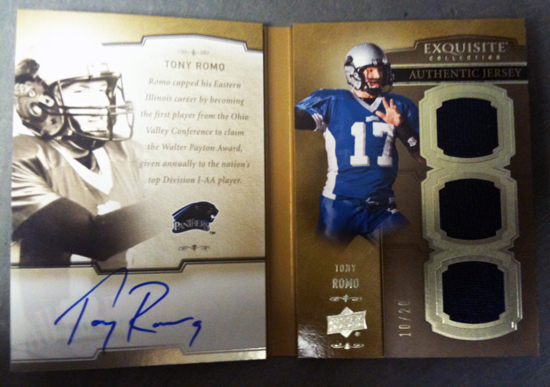 Will Tony Romo be arriving at your door? 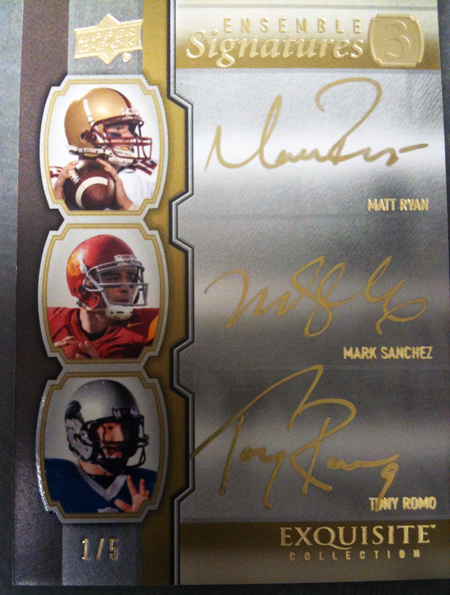 Or will it be something even more rare like this triple signed card of Ryan, Sanchez and Romo.

The majority of the remaining content consists of 2010 rookies in particular. Great efforts are being made to get the remaining cards signed so we can begin shipping other groups of these cards later on this season.

Ask Upper Deck: I saw your previews of 2010-11 NHL The Cup on Facebook and want to buy some packs of these cards, but some dealers are saying the are already sold out and the product isn’t even out yet. How can I get some packs of this product?

Gregg Cacioppo: This is the most limited NHL trading card product we produce all season and it is in very high demand. We would love to just produce more of it to meet customer demand, but our business is different than most others since we are making a collectible product. If we were to number cards higher and make more packs, 2010-11 NHL The Cup would cease to be as collectible and would ultimately be less desirable. We would rather apologize for it being tough to find and loaded with great content, than to mass produce it and have collectors disappointed with what the received after opening packs. 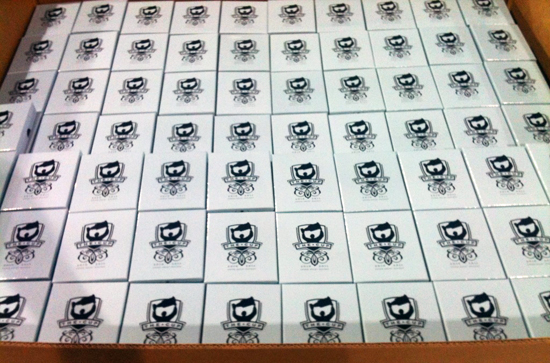 NHL collectors cannot wait to get their hands on new packs of 2010-11 NHL The Cup which is set to release August 31.

Many shops pre-sell the product so even though 2010-11 NHL The Cup will not release in stores until August 31, there is the chance shops may have already sold through their allocation of the product. If you are looking to get the product, make sure to reach out to your shop owner now so he can get reserve a pack for you. 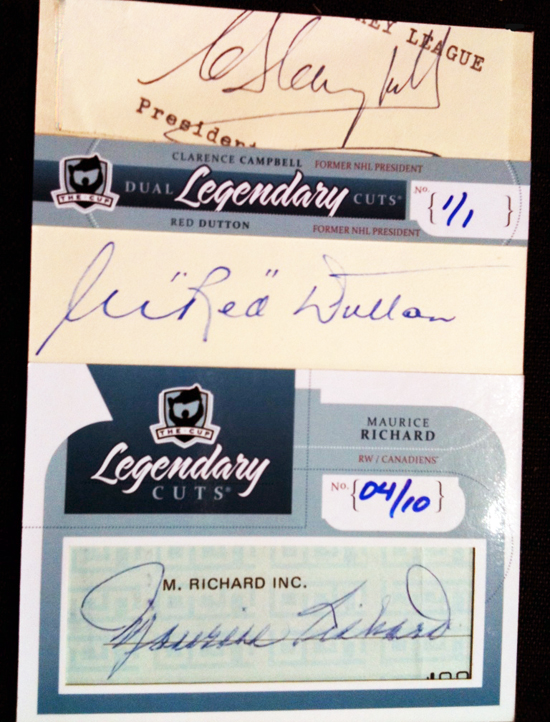 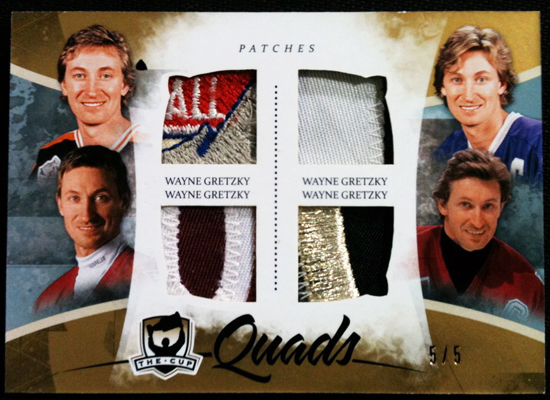 Only Upper Deck can deliver Wayne Gretzky trading cards to collectors and there will be some "great ones" in 2010-11 NHL The Cup. 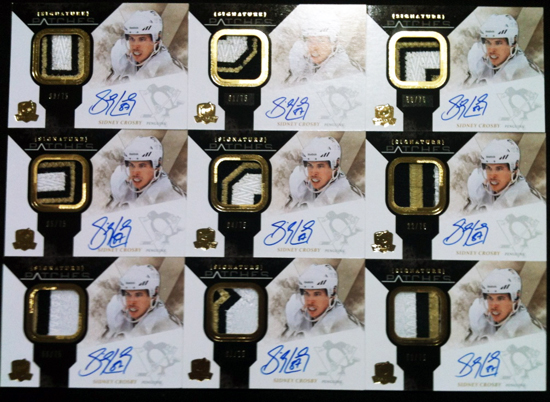 UD pulls out all the stops to make the release of The Cup memorable for collectors by loading it with great content. The only difficult part is tracking down the packs before they have all been sold!

That being said, we highly encourage collectors to be careful with where they purchase 2010-11 NHL The Cup in particular. Since it is such a high-end release, we have seen issues where people play games with the product by carefully opening the product, taking out the better cards and then trying to reseal it to sell to an excited collector who thinks they are getting a good deal. PLEASE make sure you are only purchasing a high-end product like this from Certified Diamond Dealers or our network of Authorized Internet Retailers. We cannot assist collectors with issues if the product is purchased from a non-authorized source.

Ask Upper Deck: I pulled a redemption card for Derrick Rose, when is he going to be signing?

Gregg Cacioppo: Great news, Derrick recently finished a signing session for us this week and we received autograph cards for redemption request from sets like 2011 All-Time Greats Basketball, 2011 SP Authentic Basketball, 2011 Goodwin Champions, 2010 SP Authentic Basketball and 2008-09 SP Rookie Threads Basketball. We are in the process of checking the cards for any potential quality issues then we will be packaging them and shipping them out to fans from there.

Ask Upper Deck: I saw previews of the 2011 Goodwin Champions Entomology cards at the 2011 National Sports Collectors Convention, but when will they all be done and ship out?

Gregg Cacioppo: I am pleased to share that Upper Deck has completed the production of the 2011 Goodwin Champions Entomology cards this week. The cards are in the process of being shipped to our redemption center where they will be checked for quality, packaged and shipped to customers in the United States who have redeemed them. Packaging these cards can take awhile as they are not traditional trading cards. Extra care is taken to make sure collectors get them in great condition. We anticipate they will begin shipping in early September. 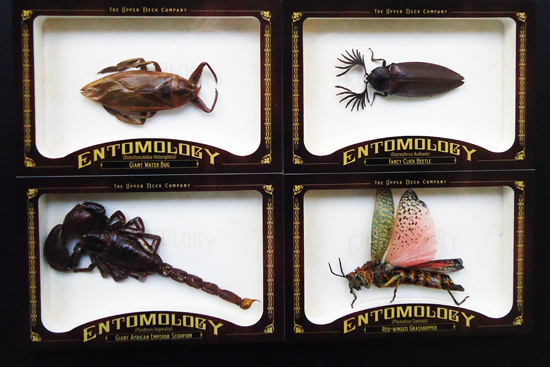 There are quite a few new creepy crawly critters in the 2011 Goodwin Champions Entomology insert set.

Here’s more on the cards from UD’s Grant Sandground.

And here is the full checklist of Entomology cards in the 2011 Goodwin Champions set.


Hey guys any word on the progress of 2011 Upper Deck AJ Green Autograph Redemptions, really looking forward to the base UD Auto Parallel!- Thanks-


OK, I will take 10 cases of The Cup. My dealer is only allocated 2 (3 box cases) WHAT SHOULD I DO!!!
I want the direct cases not through a wholesaler. I have never don well on thoes cases.