Are the San Diego Chargers Moving to LA? Not if I Have Any Say So!

What do you do when rumors start swirling about your favorite team leaving your city? I went through the whole range of emotions when word got out that the San Diego Chargers may be moving to Los Angeles. From denial, to anger, to depression and now to action; I’ve felt it all. My first step was to start a Facebook page where like-minded fans could talk about the situation and we could inform them on what is going on. 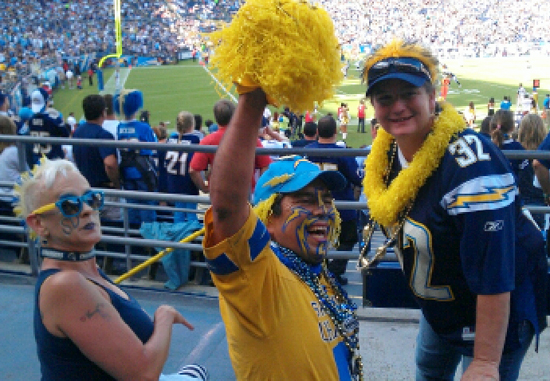 Even with doubts about the Chargers future in San Diego, the game last night was sold out and fans were backing the Bolts in a big way!

Then I decided to reach out to the main man himself; Dean Spanos. He was taking questions from fans so I wrote him and he responded:

I started a facebook fan page called, “Keep the Bolts in San Diego! Say No to the LA Chargers.” We have a little over 125 fans and I work to make sure fans know what they can do to help keep the Chargers right where they belong, in America’s Finest City. I’m not going to put you on the spot about if you are moving or not, but rather ask, “What can we as fans do to keep the Chargers here and help get the team a new Stadium? What city officials should we contact? What more can we do?”

I just found out this year I am going to be a father. The thought of bringing my child up in San Diego without the Chargers kills me. I want to be able to say I did something to help keep them here, so we can enjoy the games together. Please share with us what it will take.

“You ask a great question: What can fans and other concerned people do about this issue? After all, in the end, this is really a question about how to pay for a billion-dollar project in a way that works for the taxpayers, the Chargers and the NFL. And when you look at it that way, it may seem like there is very little that a single person can do to help.

“But getting the support together for a billion-dollar plan has to occur one step — one taxpayer — one voter — at a time. That’s why we, as an organization, have a policy to accept every invitation we receive from Rotary Clubs, neighborhood groups, political organizations and anyone else who would like to hear from us on the stadium issue. We’ve made hundreds and hundreds of presentations by now, all in the hope that by convincing a single person, we can then count on that person to persuade his or her family, friends, co-workers and fellow football fans.

“So that’s the first thing you can do: Work to persuade those you know that this is an important issue and that we ought to be able to find ways to resolve it in the best interests of everyone.

“You can also take the time to weigh in online. Every time a story is written about this stadium topic — and there are a lot of them — readers have the chance to comment at the bottom of the stories. I encourage you to make your point of view known there, because a reasonable voice armed with the facts can have a big impact during online discussions. And I can tell you that those reader comments are viewed by lots of people, including elected officials and their staffs.

“Finally, of course, you should feel free to contact your elected officials and let them know that this is an issue worth working on, and solving, for the future of our region — not to mention the future of your new baby!”

I’ve written Mayor Jerry Sanders and worked to keep the pressure on the best I can in my spare time, but sadly, it feels a bit like this may be the last season for the Chargers in San Diego. I’m not giving up though, I’m now taking my message to the streets, or shall I say, to the stadium. Last night my wife and I attended the first Chargers preseason game of the season. It is so great to have football back, but very scary at the thought of this being potentially one of the last seasons for the Chargers in San Diego. 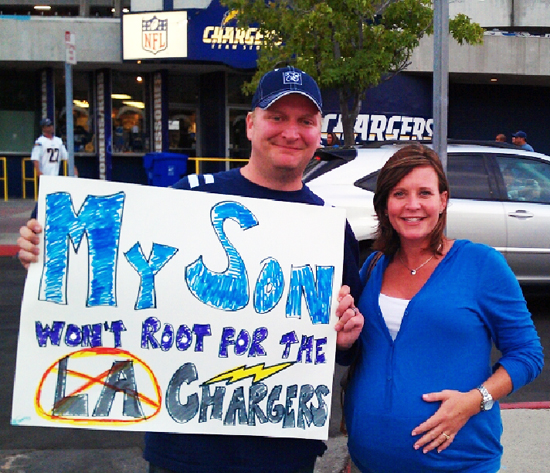 My wife and I will not allow our son to become a LA Chargers fan. Hopefully the Bolts will stay in America's Finest City!

My wife is nine months pregnant, but she loves the Chargers as well and helped by showing off a great sign to let those in attendance know how we feel. As we shared our message throughout the stadium, the San Diego faithful gave us a rousing round of applause, but still I worry. I think losing the Chargers for San Diego would be like losing the zoo or fish tacos or the sun. Hopefully Los Angeles will end up snagging the Raiders, Jaguars, Rams, Vikings, heck anyone besides our Bolts, but only time will tell.


I dont understand this, I havent run across anybody that want chargers in l.a., if they bring chargers to l.a, its plain to see the nfl will fail in l.a.


It is ridiculous and sad that we in San Diego (Bonita in my case) use so much energy to say we “hate” L.A., it’s pathetic really… a smaller city hating another bigger one for no reason… we are separated by a huge Orange County and Camp Pendelton.. we need to seriously stop being hypocrites.

The video games our kids/we play, the movies we watch, a mot of the music we listen too, amusement parks we love… even the basketball team so many San Diegans love is an L.A. team playing right in L.A.’s downtown Staples Center for Christ’s sake.

We NEED to FOCUS all our good intentions and frustrations into keeping the Chargers in San Diego.

If they move to L.A. we have no one to blame but ourselves and the Spanos!

God be with us, we’re going to need it.


STUPID! Think about, for years SD and LA have been rivals, you really think all the raiders and non chargers fans that populate LA are even going to consider buying a ticket to see the chargers. NO! And like it was mentioned above, no one in LA wants the chargers there. So go ahead Spanos, make the worst mistake you could for the team, move them to the one place they are hated most in this country. Do what you have to do to keep the team where they belong and where the fans want them. Again spending all that money on a new stadium in a place NO ONE likes the chargers is idiotic, no money made cuz ticket sales will probably drop and all money lost to build the stadium….


I live in L.A. and grew up in San Diego and even worked at the stadium selling snacks in the isles and the CHARGERS BELONG IN SAN DIEGO. I don’t want them here even though i love the team. Besides the fight song is awesome and it would be a shame to lose it if they move. Angelenos have no loyalty to ANY team. San Diego deserves and needs that team. GO SAN DIEGO SUPER CHARGERS!


Im a big fan of the NFL and i was born and raised in SD. Chargers games are my highlight of the week for me and the thought of selling the chargers to LA would totally ruin EVERYTHING, not just for me but for EVERYONE!!!!! I couldn’t bare to watch anymore chargers games if they were playing for LA. Why would we sell out our team that we had for like 50 years to the city that our rival team (raiders) used to play for? All that LA would do is keep them for a few years while probably having miserable careers and sell them out to someone else… am I right? Come on Chargers we can do better than that, we dont want to be like LA.