Upper Deck is currently running a special promotion where one lucky soccer fan will win a trip for two to attend this month’s MLS All-Star Game on July 27! For the first time in 14 years, the New York Metropolitan area will host the 2011 AT&T MLS All-Star Game at the newly unveiled Red Bull Arena in Harrison, New Jersey, a 25,000-seat soccer-specific stadium which opened last year. And Upper Deck can get you and a friend there in style; all you need to do is “Collect the Set & Win!” 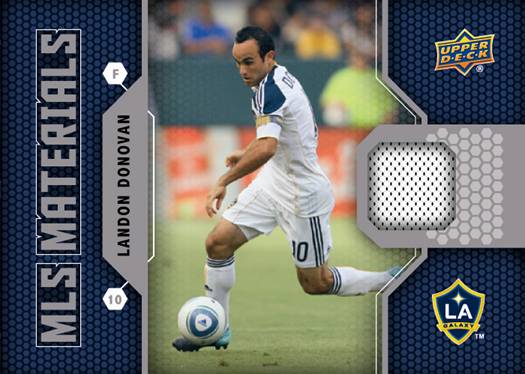 In April, Upper Deck released its 200-card 2011 Soccer Set. Inside the stunning assortment of top-notch cards featuring the superstars of professional soccer falls 20 “MLS Materials” game-used jersey insert cards. In order to enter the contest, contestants are required to collect each of the 20 different “MLS Materials” insert cards from the set, which fall at an average rate of one-to-two per box (or 1:12 packs), and then contact Upper Deck for directions on how to submit them by emailing us at upperdeckmarketing@upperdeck.com. The first collector who submits all 20 insert cards will win the trip of a lifetime, which will include two tickets to the All-Star Game, one night hotel accommodations for two, a travel voucher to cover ground transportation and meals, and a gift pack from Upper Deck.