Following months of preparation and anticipation, the Upper Deck Company, in conjunction with Marvel Entertainment, LLC, is pleased to announce this week’s release of its unique trading card project called “The Avengers: Kree-Skrull War.” Resurrecting a previously published story arc around popular Marvel characters including Thor, Captain America, Iron Man and Vision, the 190-card set boasts one original main story and four original side stories that share with Marvel fans untold tales from the legendary Kree-Skrull War. Upper Deck’s “The Avengers: Kree-Skrull War” set will be available in hobby stores on Wednesday, July 20. 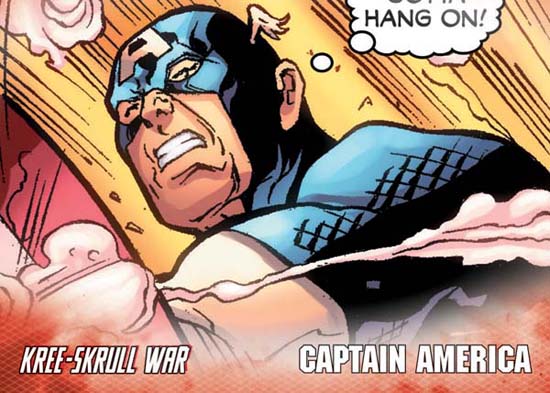 In the early ‘70s, the Marvel Universe released a story arc of nine original comics called “The Avengers” (issues 89 through 97) that followed The Avengers in their daily struggles to safeguard the world against any threat beyond the power that conventional peacekeeping forces could handle. Now Upper Deck has reintroduced many of those characters with an all-new storyline complete with original artwork that being delivered via trading cards. The main story, entitled “Sacrifice” and featuring Thor, Iron Man, Captain America and Vision, consists of 20 pages that take Marvel fans and collectors on a unique journey authored by renowned comic book writer Sean McKeever. Story pages turn front to back just like a standard comic book and consist of nine cards per page. In addition to the riveting main story, four side stories are being launched simultaneously within the same set. Eager fans can read an eight-page story titled “The Debt,” following Quicksilver and the Scarlet Witch; an intense six-page story called “The Fall,” following Nick Fury; and two four-page stories titled “Power” and “Soldiers’ Honor” featuring Super-Skrull and Captain America, respectively. 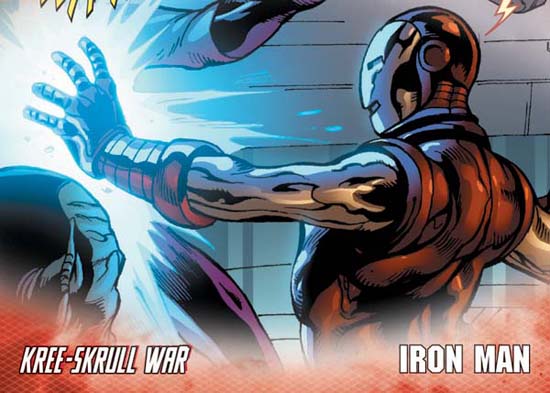 WHAMMO: Iron Man is another featured character within "The Avengers: Kree-Skrull War" storyline.

As a side promotion, Upper Deck has produced a special 22-page, limited-edition “The Avengers: Kree-Skrull War” binder in which collectors can preserve their cards. Box-topper flyers, complete with ordering information, will accompany each box. The first 1,000 collectors to fill out the flyers and mail them in will score their very own “The Avengers: Kree-Skrull War” binder absolutely free! Only original mail-in forms will be accepted; no copies allowed.

As many as 95% of the cards are self-contained; this means that the text and art shown on the particular cards will stand alone. But the remaining balance of the cards are pieces to the overall puzzle which collectors will need to put together in order to complete the full story line.

The product is packaged in boxes of 24 packs each, with nine cards falling in every pack. The nine-card packs, on average, are comprised of four main story cards, two-to-three character cards, one-to-two side story cards and one cover card. Collectors will receive the entire main story inside a single box, on average.

Not to be outdone by the original stories alone, additional insert cards are sprinkled into the mix consisting of the cover art; the main cover; a black-and-white variant; and a special art variant version will all be collectible within the set.

I would really like to get one of the binders. I’m from the UK, were do I get a form from or do I have to purchase one? If so, where can I buy one from?