The Day I Met Harmon Killebrew

The year was 2000 and it was an unseasonably warm December day in Richmond, Virginia. As Upper Deck’s e-commerce project manager at the time, I was working at the Tuff Stuff Autograph Show inside the Richmond Raceway. I was given the task of orchestrating the start and end times, as well as the raw materials needed (baseballs, 8 x 10’s, mini helmets, etc.) for each of the retired athletes Upper Deck had secured to sign at the show. Our lineup included Hall-of-Famers like Lou Brock, Reggie Jackson, Jim Palmer, Warren Spahn, Steve Carlton and Harmon Killebrew, the legendary Twins’ slugger who passed away yesterday at the age of 74. These guys were all baseball legends and I was thrilled to be working alongside each one of them. 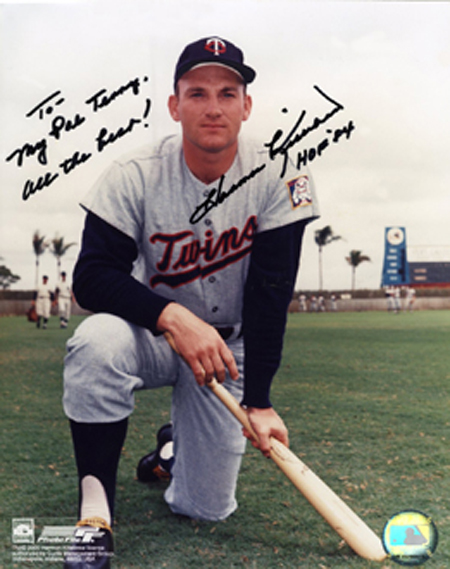 KILLER: This was the 8 x 10 photo I took home, personalized by Harmon Killebrew.

There were 10 of us from Upper Deck who made the trip from Carlsbad, California, to make sure the day’s proceedings ran smoothly. We each had a role to play: taking autograph tickets; selling raw materials to autograph seekers; filtering people through long lines; assisting the athletes with pens and Sharpies; applying serially numbered Upper Deck Authenticated show holograms to each of the pieces seconds after the athletes signed them; and then matching up the proper COA (certificate of authenticity) with each item so that fans could walk away with a great signature as well as the documentation to back it up.

I was able to assign myself to three athletes that day and assist with their 60-minute signing sessions. I chose, in no particular order, Lou Brock, Steve Carlton and Harmon Killebrew. I had met Brock years before at an autograph show in Anaheim when I was the editor of Trading Cards Magazine. He signed an 8 x 10 for me that day and wished me well with the new start-up publication. It was an exciting moment for me and I remembered his pleasant demeanor. I was happy to see that nothing had changed in the ensuing 10 years, and that he remained the best dressed athlete on hand. Brock really took pride in his appearance. 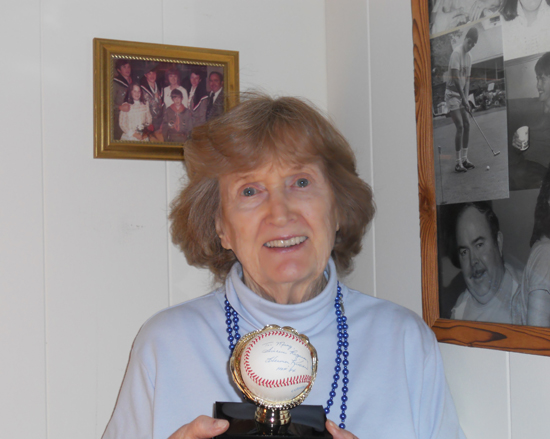 My day closed with Carlton, the former Phillies southpaw who was appropriately nicknamed “Lefty.” He was a quiet sort, polite as the day is long, and a consummate pro when it came to laying down his signature. He reminded me of a slightly older version of Bruce Boxleitner, the actor who used to star in the old “Scarecrow and Mrs. King” and “Babylon 5” TV series.

But in between Brock and Carlton, I found myself alongside Killebrew, hologramming each of his signatures for the fans. He was a very nice old man, I thought. He was 64 years old and reminded me of someone’s good-natured grandfather, which he was. But what I noticed throughout the hour-long signing, which went about 15 minutes over, was that he took his time and signed each item with flawless penmanship. He took great pride in his signature and was very earnest about being consistent. And if someone asked him to personalize an item, he did so without batting an eye.

At the end of the day, I sought out Killebrew to ask him for an autograph of my own. Like a regular fan, we were given the chance to secure an autograph or two, just as long as we paid for it. I knew all about his 573 home runs even though I couldn’t recall ever seeing him play. But his stats and accolades spoke volumes: 2,086 hits, 1,564 runs batted in, 1969 American League MVP and 1984 first-ballot Hall of Fame inductee. I walked up to Harmon and he put his hand on my shoulder and asked what he could do for me. I said I’d like to get a personalized 8 x 10 for me, along with a baseball that he could personalize to my mom, a native Minnesotan who grew up in Le Sueur, also known as the “Valley of the Green Giant.” 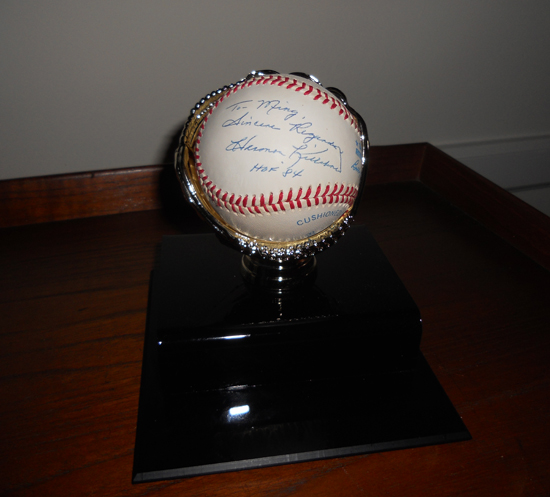 He laughed and said no problem. With a black Sharpie in hand, he took the 8 x 10 and signed it: “To My Pal Terry. All the best! Harmon Killebrew HOF ’84.” He then asked me what my mom’s name was and I answered “Margaret.” But I quickly told him the back story behind her nickname “Ming.” He listened to my rant about an old newspaper comic strip where one of the characters named Ming used to wear her hair in pigtails like my mom did as a young girl. Her brother Tom gave her the nickname while they were in grade school and it stuck.

He laughed again, took the baseball, grabbed a blue ballpoint pen and signed it: “To Ming Sincere Regards Harmon Killebrew HOF ‘84.” She still has it displayed proudly in her family room back on Long Island, and I still have the 8 x 10, which I looked at again yesterday. Thanks Harmon. You were a class act.


T.E.M.
Great back story about “Ming”. Nice recap on that unusual name.
I like the personalization. Next year when VCU makes it back to the NCAA big dance – maybe someone else could be featured in your blog as a Cinderella at “Cinderella VCU”. Keep on bloggin!


My husband’s aunt lived just 2 doors down from Mr Killebrew. One day she took my husband down to meet him. Mr Killebrew gave him an autographed photo and ball. To this day (52 years later) it is still one of his treasured memories. He still has the ball and photo, also.