Believe it or not I did not get an invitation to the premiere of Marvel’s latest superhero movie; Thor. But that’s okay, my feelings aren’t hurt because, in a way, I saw the movie well before anyone who did make it out for that red carpet affair did. How you ask? Well I just cracked a box of Upper Deck’s Thor trading cards so I got a pretty good feel for what to expect from the film and I gotta say, besides Loki’s weird headgear, I like what I see. 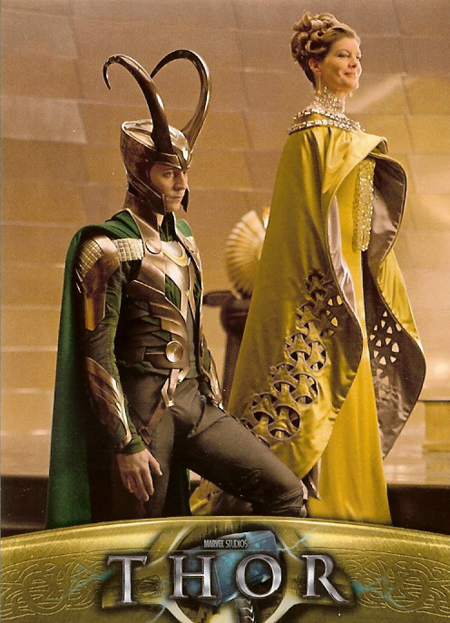 Loki needs a little help with his taste in headwear if you ask me...

While I’m excited to check out the movie tomorrow, I’m happy to share a “pre-review” of the film based on what I can tell from the trading cards. Enjoy!

If you’ve ever looked up on a clear night’s sky covered with stars, you can’t help but think that we are not alone. Well somewhere out there is a planet called Asgard which looks quite a bit cooler than Earth. It’s ruled by Odin played by Anthony Hopkins. Odin’s getting older so he knows that it’s time to transfer power over to one of his sons. He could go with the handsome warrior Thor or his brother Loki who has an affinity for bad headgear and getting into mischief (think of Danny DeVito’s character Vincent from the movie Twins). 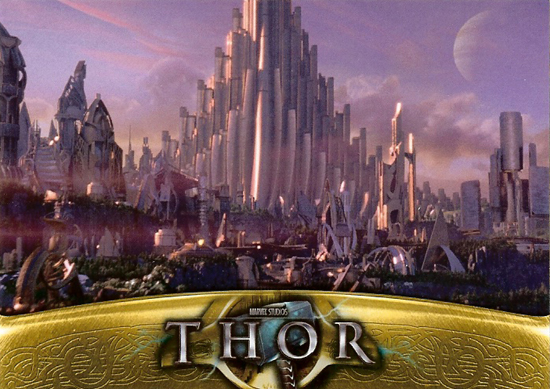 Asgard is a pretty sweet looking planet! I love what you've done with the place Odin.

It seems like a slam dunk to give Thor the throne, so Odin does, but guess what? By doing so he’s upset Loki who is looking to cause some trouble. Loki tells these guys called the “Frost Giants” that they have an important relic of theirs in the Asgard vault so naturally the guys break in and then Thor and company storm off to confront them. Things go awry during their mission to Jotunheim (who comes up with these names?) and Odin is upset with Thor’s decision-making process and strips him of his power AND his hammer. War quickly descends upon the kingdom and Odin has to send Thor somewhere to lay low so he is banished to Earth. Think of it like an interstellar time out. 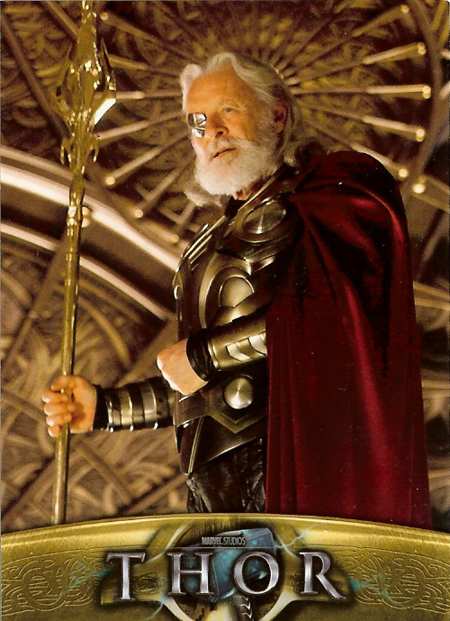 Don't step to Odin or you'll be banished to Earth. Doesn't that sound terrible?

Odin needs some rest himself so Loki takes the reins and becomes the ruler of Asgard. Meanwhile, back on Earth, Thor lands and is hit by a truck. But it’s not all bad; he’s a tough guy and guess who’s driving the truck? You got it, Natalie Portman. Niiiiiiiiceeeeee! Natalie plays the character named Jane Foster and she and her friends just think Thor is some homeless guy, but they can’t get over the fact that he is really yoked up. How can a homeless guy be so ripped? 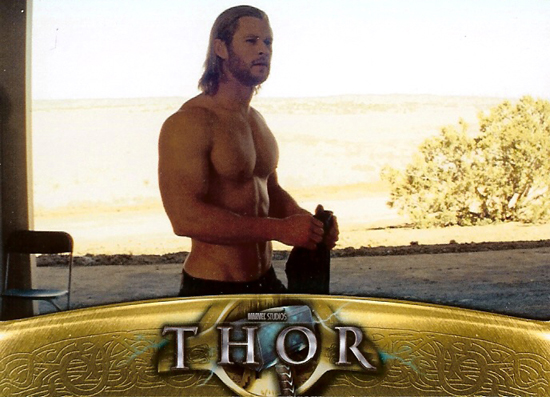 "Yeah, I'm a homeless guy. They've got a great new gym down at the rescue mission."

Thor’s hammer arrives as well creating a huge crater and it brings out the guys from S.H.I.E.L.D. You may remember some of their work from other Marvel films of late. Thor comes clean to Jane about who he is and where he came from. She’s hesitant in the beginning, but eventually comes around. Now Thor has to reclaim his hammer so he comes up with a great plan: kick everyone’s butt who stands in his way and get it back. I like it! The bad news is, despite his efforts, Thor cannot lift Mjolnir (yeah, his hammer has a name) because he is not worthy. Thor is devastated and the S.H.I.E.L.D. agents capture him and want to know what his story is. 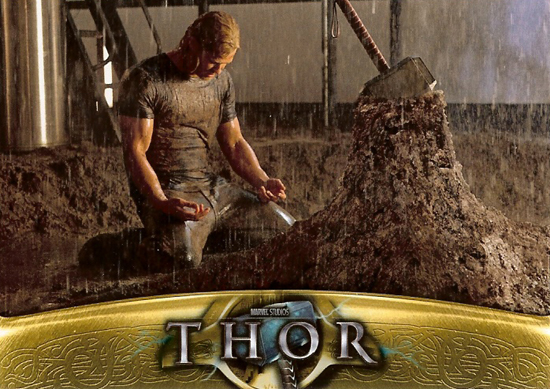 Like the sword in the stone, Thor is so disappointed he cannot claim his hammer.

Meanwhile, back on Asgard, Loki is working to make his temporary rule into a permanent one. He gets Thor’s buddies to reluctantly give him their allegiance, but he knows that as long as Thor is still alive, he poses a threat to his rule. Thor’s friends have to warn Thor so they head to Earth to let him know that Loki has become consumed with power. Loki decides to summon a terrible weapon called “The Destroyer” to head to Earth as well and wipe out Thor. And then my friends, like a showdown in the wild, wild west, Thor battles “The Destroyer.” 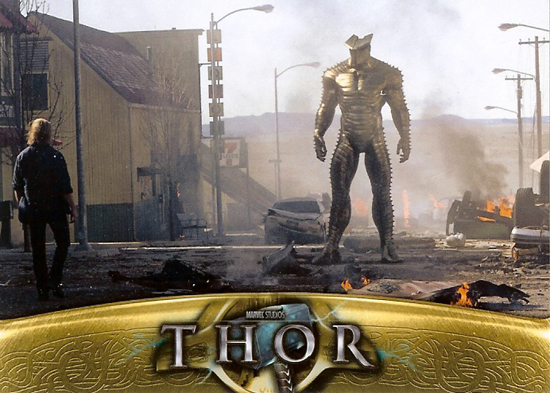 It's not looking good for Thor as "The Destroyer" sizes him up.

Will Thor be able to conquer “The Destroyer” without his hammer? Will anyone be able to put a stop to Loki’s evil plans? Find out by bringing home a box of Thor cards and have a premiere of your own! Tuxedo is optional. 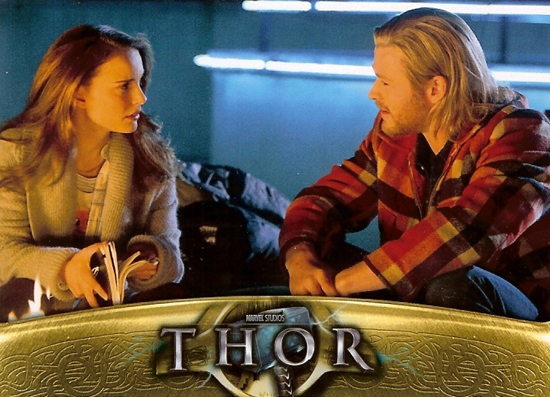 "So listen, if you ever make it to Asgard, look me up, okay?"