Rajon Rondo Could Be Called Hondo

Boston Celtics guard Rajon Rondo certainly has a unique name. And his last name rhymes with the nickname of one of my childhood idol’s and one of the greatest Celtics ever: John “Hondo” Havlicek. But following Game 3 of Boston’s Eastern Conference semi-final battle against the Miami Heat, it may have been Rondo who turned in an even grittier performance than John Wayne in the movie: “Hondo.” Wayne, as you have probably figured out, was the inspiration behind Havlicek’s nickname, but it’s Rondo who may have actually just earned the moniker.

At the 7:02 mark of the third quarter on Saturday, and Boston holding a 60-50 lead, Rondo was covering Heat shooting guard Dwyane Wade like a glove. Wade, noticeably flustered, suddenly lost his footing as he tried to back Rondo down the court. On his way down, Wade executed a backward foot sweep on Rondo that any collegiate wrestler worth his salt would be proud to call his own. Falling backwards, Rondo instinctively put his left arm out to brace his fall, but the awkward angle hyper-extended his arm in grotesque fashion. Letting out a blood-curdling scream, Rondo grabbed his left arm and started writhing in pain. Even the first ref who came upon the pile-up turned his head away, looking as if he was about to vomit. Wade simply scooted away, aware of what had just occurred, but certainly in no hurry to wish Rondo well. 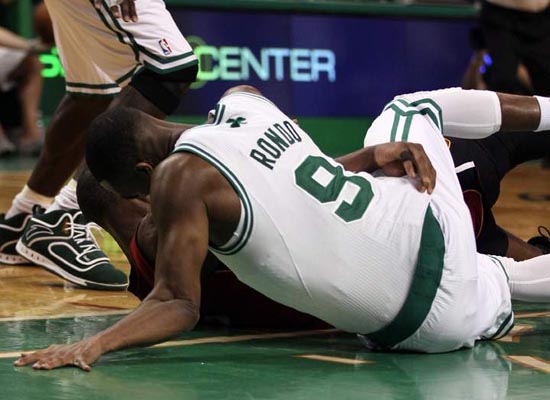 OUCH: Rondo's awkward fall, with a little help from Dwyane Wade, produced this grotesque scene. He was back in the game minutes later after having his left elbow popped back into place.

Rondo was escorted to the locker room, in obvious discomfort. His return to the game was doubtful, as was his availability for the reminder of the series, which Boston trailed two games to none. But what followed was one of the gutsiest performances you’ll ever see at a basketball game, professional or otherwise. Despite suffering a dislocated left elbow, Rondo returned to the court about five minutes later (less than a minute in actual game time) and led the Celtics to a convincing 97-81 victory. Playing with basically one arm, he finished the game with six points, 11 assists and one big steal. His will to win would not be denied that night. Nobody drops Rondo – since he’s like Hondo – and gets away with it.

Heading into tonight’s Game 4, the series stands at 2-1 in favor of the Heat. But don’t give up on the leprechaun, or that gutsy point guard named Rajon “Hondo.”