NHL Playoffs: Where are All the Hobby Heroes?

As we approach the end of the second round of the NHL playoffs, there are a few things that are abundantly clear. First is this: the second round is the anti-first round. After only one series going less then six games in the first round, the second round has the potential to be a round of blowouts. Not so much in terms of the scores of the games, but faster series.

The second thing that is pretty clear is that these NHL playoffs are void of hobby heroes. A number of very good players are having very good playoffs, but a fair number of so-called big-time players have been very average. 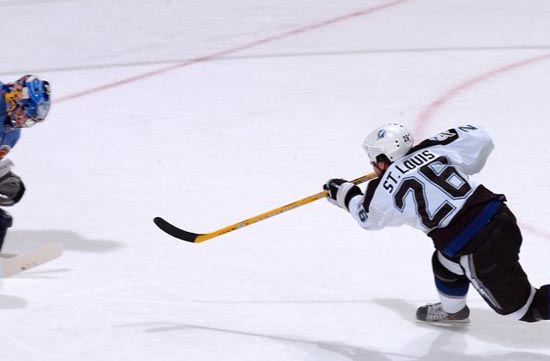 SHOT, SCORE: Martin St. Louis is doing all he can to make some noise in this year's NHL playoffs.

Not that scoring is the only determining factor of what a player can bring to the table, but for the casual fan, they will be looking to the top scorers’ lists to find out who to watch.  Right now when you look at the top scorers’ list you see a few fairly familiar names: Martin St. Louis (a former Art Ross Trophy winner); Patrice Bergeron (who is currently concussed); Claude Giroux (who has been eliminated); Ryan Clowe (a nice role player); Vincent Lecavalier (who is playing rejuvenated hockey, and is a former No. 1 overall pick); and Steve Downie (he of all of 32 regular-season points). Again, some nice players, but not the Steven Stamkos, Alexander Ovechkin or Sidney Crosby level that people clamor for in the hobby.

On the bright side, maybe some of these players get a bit more attention in the hobby, which is never a bad thing, but this is the time when hobby and hockey heroes are made, a time for a star player to elevate his game to new levels. Think Crosby, and Evgeni Malkin a couple years back.  Think Pavel Datsyuk and Henrik Zetterberg the year before that.  Big-time players putting up big-time numbers and playing big-time roles and coming up large. The hobby loves it and so do hockey fans.

This year, there has been some relative no-names showing up big time in the playoffs.  Already mentioned Steve Downie, teammates Sean Bergenheim (tied for the playoff lead in goals) and Teddy Purcell have been one of the top lines in the playoffs, and are making teams pay for putting all of their eggs out to stop their “stars.” If they can continue this trend against Boston in the Conference Finals, they may well return to the Cup finals, after not many fans gave them a fighting chance against Washington even after they got by the Pittsburgh Penguins.

A couple of highly touted players, one an off-season acquisition and one a home-grown talent, are putting together big postseasons, and not just on the score sheet. Vancouver’s Ryan Kesler has carried his team to this point through the second round, and is finally scoring. He puts up numbers in bunches, and is a player who plays both ways as well as anyone in the game today. He can get under your skin as well, draw penalties, win face-offs in all three zones, the man can do it all.  His game-winning goal in Game 4 against Nashville was a thing of beauty.

Nathan Horton, a former No. 3 overall pick in 2003 (Kesler was taken 23rd in the same draft), has finally gotten over losing (being in Florida for so long will do that to a kid), and showed up big in the playoffs.  A couple of game winners, dropping the flippers against rugged veteran Sean O’Donnell versus Philadelphia, and doing the things that need to be done. He and Milan Lucic are playing big, bad Bruin power forwards to a tee.  It is good to see him finally doing what many believed he would be able to do right out of junior hockey.

I love the NHL playoffs every year, and every year they present us with something different. This year seems to be the year of the “grinder,” the guys who all hockey people “in the know” talk about as being so important. Good players are playing well, but for whatever reason, this year seems to be lacking a “hobby hero.” With two more rounds to play, maybe the next big thing will present himself yet.


Nice job Upper Deck and Christopher but Steven Stamkos is still in the playoffs.


Right on Chris with your comments! Being a big fan of Vancouver, I’m looking forward to the next series. I believe we really haven’t seen their best games yet, they have had flashes but haven’t shown the consistent focus that they have had for most of the season!


I agree Ewen, but for the most part, Stamkos has been contained. I wish it were his coming out party. Think how great his cards would be doing right now on the secondary market if he were producing like St. Louis.


they never said he wasn’t. they just said he’s not at the top of the playoff point getters list.

also, based on tampa’s marketing (seen stamkos), and his point production I’m not sure he is in the playoffs… if he is, he must have changed his jersey sweater to Bergenheim.


Stamkos has had some moments, and hopefully the best is yet to come with him. Datsyuk has been otherworldly for the Red Wings the past few games. His pass to Filppula last night on the go-ahead goal was an all-timer — a saucer pass over not one, but two defending Sharks sticks right on the tape.