Is Derrick Rose a Momma’s Boy?

Being called a “Momma’s boy” is considered an insult on most schoolyards. But if you call Derrick Rose that, he considers it a compliment. Before each game, he blows a kiss to his mom and you will find her name tattooed on his hand along with an image of a rose.

Says Rose: “The reason I’m playing is because of her.”

Brenda Rose worked hard to protect her son as he grew up and to make sure he didn’t have to worry about tight financial issues the family may have been in. She tried to raise Derrick right and always told him, “Just because you can play basketball doesn’t make you better than anyone.”

It seems like she knew what she was doing. This season, his third in the NBA, he revitalized the Chicago Bulls and led them to the league’s best record (62-20). After being drafted by the Bulls out of Memphis, some thought he was undersized, but he has shown all the naysayers that he has the heart of a champion. And now, he’s just been named named the league’s most valuable player. At just 22, he’s also the youngest NBA player ever to achieve that accolade.

He has become a hero to many in the Chicago area, but who is Derrick Rose’s MVP? During a signing session at the start of the NBA season, we asked him to inscribe the name of his hero next to his signature for use on new trading card releases. The inscription should come as no surprise to those who know Derrick; he simply wrote, “mom.” 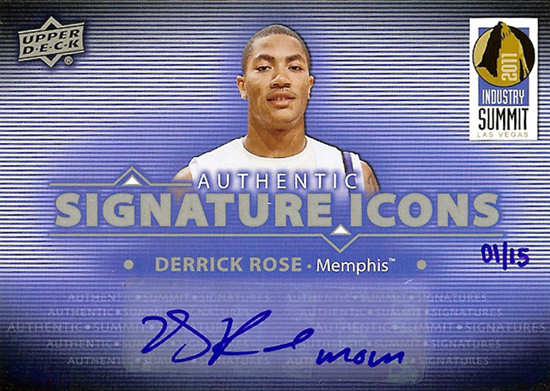 Only the first five signature cards in this set include the inscription of Derrick Rose's hero, his mom. You can win one of these limited signed cards at a participating Certified Diamond Dealer this Mother's Day weekend!

With Mother’s Day occurring this weekend, Upper Deck is sharing these five signed cards from Derrick Rose with Certified Diamond Dealers in the Chicago area to use for promotions in their shops. As you may have heard, Upper Deck is doing more to promote Certified Diamond Dealers these days and this is just another example. If you are in the Chicago area and would love to add one of these special cards to your collection, contact these shops to find out how you could win one!

Happy Mother’s Day to Brenda Rose and all the other moms out there from your friends at Upper Deck! Father’s Day is up next, shop early for the Bulls fan on your list by clicking here.