As Upper Deck’s Public Relations Manager, I’ve met LeBron James on several occasions. In September of 2008, fresh off his gold-medal-winning play in Beijing, we conducted a special “Shoot Hoops with LeBron James” clinic in our front parking lot, which the local media ate up. Ten worthy kids learned the round-ball ropes from King James himself. Three years before that, at the end of LeBron’s second year in the league, he paid us a visit where five different contestants from around the country squared off against him in individual games of H-O-R-S-E, or in this particular case, “L-B-J.” For the record, LeBron dropped the first contest to a loud-mouth firefighter from Philadelphia, but then rediscovered his game and went on to obliterate the next four dreamers. As the emcee at both events, it provided me with an adrenalin rush as well as a chance to see LeBron up close to watch him deal with star-stuck fans. 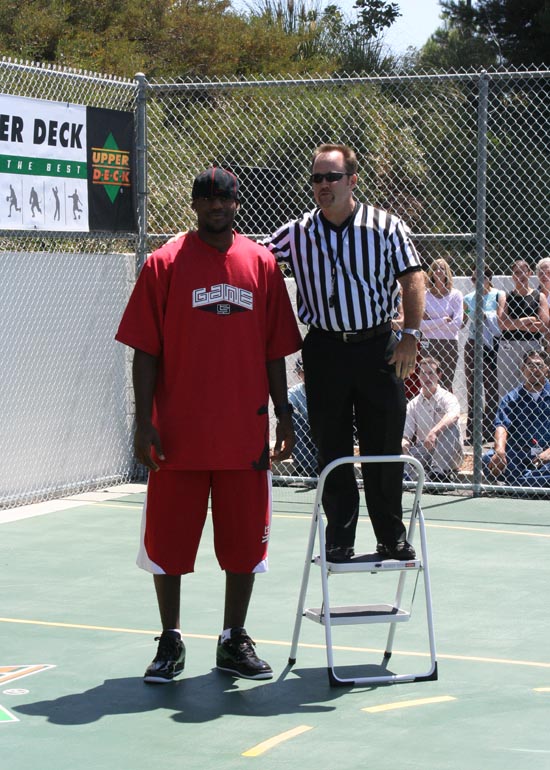 THE AIR UP THERE: My first meeting with LeBron occurred on August 31, 2005, when he entertained the masses in a special shoot-around at Upper Deck headquarters. He was kind of quiet at first.

I’ve also been able to go one-on-one with LeBron in an interview setting on two separate occasions during closed-door, autograph-signing sessions with Upper Deck Authenticated. He’s always been thoughtful with his responses and generous with his time. And I just want to say, publicly, “Thanks LeBron.”

But now I want to say: “Stay focused big guy. You’re almost there.” Last night I watched him come to life against my beloved Boston Celtics and knock my team clear out of the playoffs. By scoring the last 10 points of the game, LeBron dealt the knockout baskets that sent Paul Pierce, Rajon Rondo, Ray Allen and Kevin Garnett packing. And while I respect his talent, it was still a tough pill to swallow especially after watching the Celtics beat the Heat for 44 minutes and then forget how to close out a big game. And they didn’t just forget what to do; they pretty much went on auto-pilot for the last four minutes and watched LeBron eat them alive. No. 6 finished with 33 points, which came up short of Dwyane Wade’s game-high 34, but it was clearly LeBron who drove the dagger through the hearts of the Boston faithful. 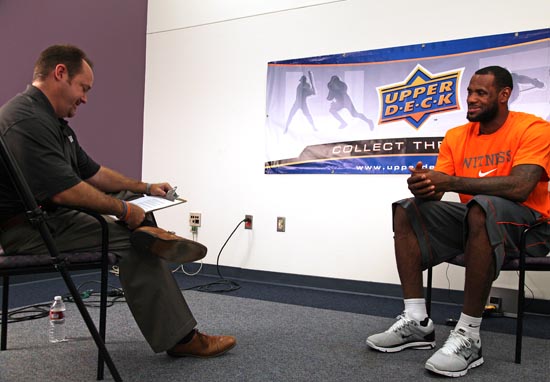 THAT'S A GOOD ONE: My second interview with LeBron was on July 28, 2010, about three weeks after his announcement that he was leaving Cleveland for South Beach. He was in a good mood.

Following the game, he told the attending media that he wanted to apologize for how “The Decision” went down last July when he made his well-publicized announcement on ESPN that he would be taking his talents to South Beach after seven seasons in Cleveland. He also mentioned last evening that he couldn’t do it all himself and that he needed superstar talent (a.k.a. Wade) around him if he was ever going to win a championship ring. And then he said something that really caught my ear. He said he respected the Boston Celtics a great deal and that he, Wade and Chris Bosh were merely “following the blue print” that the Celtics laid down three years prior when newly acquired Boston teammates Kevin Garnett and Ray Allen joined forces with Celtic sharpshooter Paul Pierce and secured the franchise’s 17th championship banner eight months later.

He was talking like a man who had exorcised his demons by beating a “championship team,” yes. But he also sounded like somebody who just made it to the top of the NBA mountain. Granted, getting past the Celtics is not an easy task and was something LeBron had never done before. But now he needs to stay focused and keep his blinders on to get past either Chicago or Atlanta in the Eastern Conference Finals and then defeat either Dallas or the winner between Oklahoma City and Memphis in the NBA Finals. There is still a lot of basketball to be played, LeBron, so keep your eyes on the prize. You’re not there yet.