Collector of the Month: Ron Firestone Hunting For Michael Jordan

Each month Upper Deck spotlights one of its valued collectors to showcase their collection or pursuits. The great thing about sports collectors is that they are all very different in what they collect, how they collect, and what they do once they have the cards they were looking for. Ron Firestone is the type of collector who just loves the thrill of finding great cards when opening more premium packs. He has a fantastic collection and has some great cards he has either purchased or traded for, but the cards that have the most meaning to him are the ones he pulled.

I frequently get updates from him on his collecting pursuits. One of his biggest quests has been to pull a Michael Jordan signed cards from a pack, but sadly, his luck has not been very good. Check out his story on this quest below:

“I have been a sports card collector for decades going back to 1959 and to me there is nothing like pulling that special card you are looking for from packs. I really got the bug in 1997 when Upper Deck released their first Michael Jordan autograph jersey card randomly in packs. More than anything I wanted to find one of those cards and I opened pack after pack to no avail. Opening boxes wasn’t enough so I moved on to opening cases, but still Michael’s signed cards never found their way to my packs.

“I took up my pursuit again for Upper Deck’s 1998-99 Basketball set hoping to find a Michael Jordan autograph or jersey card. While on a business trip to Albuquerque, New Mexico, I stopped by one of my favorite card shops to see if I could find MJ. As I walked into Bubba’s Baseball Bullpen I immediately saw five packs by the register and cracked them open with no luck. Bubba let me choose which box to open next and I pulled a sweet Jordan insert card, but still no autograph or jersey card. I opened some more, but realized I was going to be late for a meeting if I didn’t get going.

“As I go behind the wheel I remembered there was another open box with five packs left in it. I couldn’t just leave those there right? So I headed back in, busted them open and realized I had found something really special with a 1998-99 Upper Deck Michael Jordan jersey card. I started yelling and going crazy in the shop I was so excited. And while it didn’t have MJ’s autograph, it gave me hope that my day would come. 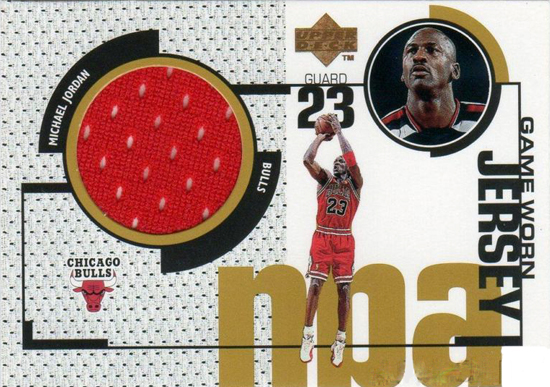 This card was one of Ron's first big Michael Jordan pulls.

“Next season I didn’t find the elusive Jordan autograph card either, but scored TWO Jordan jersey cards. At the time these were a really big deal so I was pretty happy. As the years progressed and jersey cards became a standard in every product release I was able to pull more Jordan jersey cards, but still no autographs.

“I came close a couple times in 2001 where other collectors opened the packs I was looking at to find Jordan autographs. The worst were some packs that were moved to the dollar bin. I was so close to breaking them and finally a young boy got them for getting good marks on his report card. And wouldn’t you know it, he pulled a Michael Jordan autograph card. It was hard to be mad about it, he was super excited.

“For 2004-05 SP Game-Used I felt that luck would finally be on my side. I got a box and made quick work of opening it up to discover a redemption card. Like most collectors, I’m not a fan of redemption cards, but I know Upper Deck only has a few signings with Jordan a year so maybe I am finally in luck. I quickly turned the card around to discover it was indeed Michael Jordan! I went down to my knees, just totally thrilled. The only issue was, it was just not the same as pulling an actual autograph card of MJ. I had to wait awhile until he signed and it just took some of the excitement out of the pull waiting for him to sign it.

“I had my Jordan autograph card, but I wanted the thrill of opening a pack and seeing his signature looking back at me, so my quest continued. Year after year whether I was opening up low priced products or higher-end releases like Ultimate Collection or Exquisite, my hunt was fruitless. I got some great cards of course, but not the main one I was looking for. To make matters worse, it felt like every collector around me was pulling them. Often I would get to the shop just to hear the story of another collector who beat me to getting a Jordan autograph card.

“I was starting to grow discouraged, convinced that Upper Deck somehow knew which packs I was opening and deliberately withheld Jordan autographs from them. In my frequent talks with Chris Carlin at Upper Deck, he would provide encouragement, but I was really feeling like it would never happen for me.

“When I head about Upper Deck’s new SP Authentic Basketball set I was so excited as there hasn’t been much exciting in the way of new Basketball product out for awhile and the though of pulling a Michael Jordan or LeBron James autograph had me interested again. I tried a box one night, but didn’t do so well. I came back again later on in the week and had the shop owner pick me a box, I got skunked again.

“Then the shop owner set two boxes in front of me and told me to pick my next box. It was my birthday so I picked the box with the serial number closest to my age and then started the rip. I started off with an Ed Davis jersey card, then a nice Larry Bird hologram card followed by a few more inserts. With just four packs left I pulled a Bill Walton autograph which had me pretty excited. Figuring I had received what I should, I opened up the last packs with little hope of finding anything special. I opened a pack and saw a card with ‘NC’ which led me to believe I had pulled a MJ card of some type, perhaps a floor card. That is what it turned out to be, except this one was AUTOGRAPHED!!! I was finally holding one in my hand. The Michael Jordan Supreme Court autographed floor card was now mine. 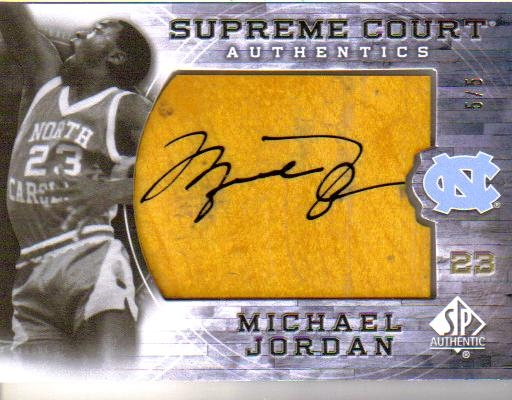 At long last that elusive Michael Jordan autograph card had been found by Ron.

“The quest is over! The thrill of finally pulling it was amazing! Thank you Upper Deck for giving collectors like me the opportunity to own an amazing collectible like this.” 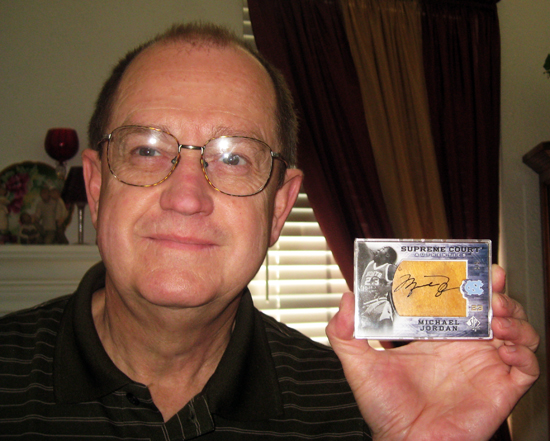 There is no better feeling that pulling an autograph card of one of the greatest basketball players of all time! Just ask Ron Firestone if you don't believe us.


Great story — congratulations Ron! Now I want to know what he did with all the cards from those case breaks.


WTG Ron! Your one LUCKY GUY! Pass me some MOJO LUCK will ya! Thanks for the story 🙂
Dave in Mass.

CONGRATS MR FIRESTONE YOU FINALLY GOT ONE AND ITS A BEAUT


Awesome pull I have only had tha feeling once. When pulled a barry sanders auto reprint I waa out to pass out


amazing pull. that must have felt like no other pull. what/who’s next? LOL mike


Hi Ron,
amazing story. i have a question..i have one of the only 2 rare upper deck error card signed by michael entitled “The Final Shot”..do you have any idea how much it cost now?


Hi Ronnie. Chris that is a great story. Both keep in touch.


hey ron i have a few m.jorden rookie card and more for sale