Brag Photo: A Smörgåsbord of Memorabilia

Have I mentioned before that Upper Deck is a cool place to work? Well if I haven’t, I’m here to tell you that it most definitely is. It seems like not a week goes by where we don’t have some cool memorabilia item come in from an athlete or we have tons of memorabilia on display for media or we complete a signing with a superstar. And sometimes, you get the perfect storm, and it happens all at once. Kind of like this week.

There were so many cool items to show off, we just couldn’t pick one so we had to show them all. Take a look and enjoy, just try not to drool onto your keyboard…

Last week Landon Donovan and the Los Angeles Galaxy faced off against Theirry Henry and the New York Red Bulls. The game ended in a 1-1 tie with a goal from both Donovan and Henry. We received the uniform that UDA’s newest spokesman, Landon Donovan, wore in the game. It will be signed by Landon in the coming weeks and offered up through Upper Deck Authenticated’s new Suite One-of-One program. And let me tell you, this really is a sweet one-of-one memorabilia piece, especially after Landon lends his signature to the jersey, shorts and shoes, WOW!!! 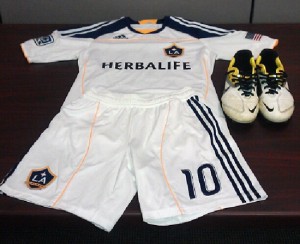 Straight from Landon himself, the uniform he played in last week against the New York Red Bulls. 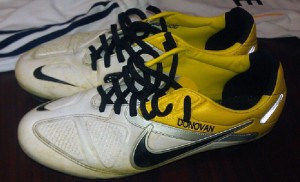 How cool is this? He's got custom Nikes! 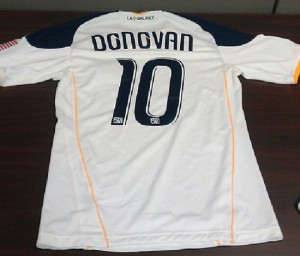 Landon Donovan is so fast that this is normally all the opposing players see, the back of his jersey.

Collectors have shared with us that they would like to see more game-used sticks incorporated into trading cards. That is easier said than done unfortunately. Sticks are very difficult to cut, especially the newer ones where some actually need to be cut under water. But we want to give collectors what they want. This beauty will likely be used in 2011-12 NHL Artifacts and was used by Alex before he became the larger-than-life superstar he is today.

One sweet stick from Ovi's during his rookie season.

The Capitals have a cool hologram on the stick.

The nameplate on the stick is a bit faded, but you can still make out his name.

He is the Heisman Trophy Winner who led the Auburn Tigers to the National Championship this season. Oh, and he just happened to be the first pick in the 2011 NFL Draft going to Carolina who is in desperate need of help at the Quarterback position. Upper Deck recently held a signing session with Cam and was able to acquire these stunning helmets from this future star. A must have for any Auburn fans out there. Check out all the Cam Newton items available by clicking here. 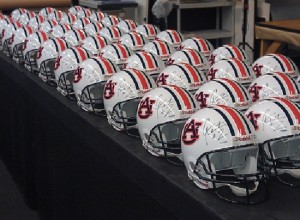 Forty beautiful Auburn helmets, but who signed them? 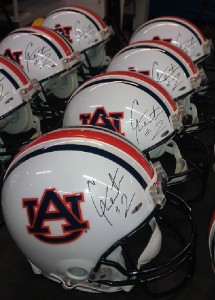 Could it be? It is! The signature of Cam Newton, one of Auburn's greatest stars! 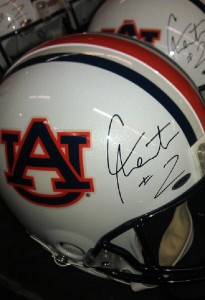 We had a variety of Upper Deck Authenticated memorabilia items out for a recent shoot for media. There are just so many amazing pieces that we produce that are different than anything else out there. From the Tegata piece, to the Legends of Sport piece, on to the Curve displays for Michael Jordan and hockey; if you are a sports fan, we’ve got you covered. We had to take this jaw dropping display down because staff couldn’t stop checking it out. Can you blame them? 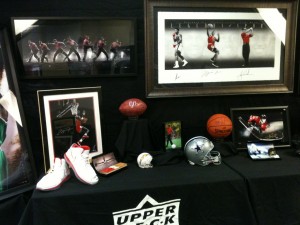 Take a gander at all these awesome UDA memorabilia items! 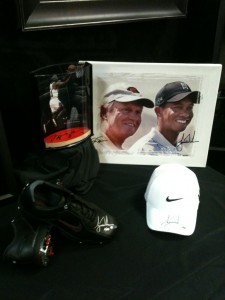 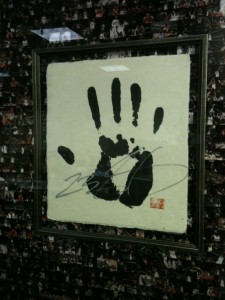 LeBron James and the Heat have been on fire during the playoffs. The only thing hotter may be the new LeBron James Tegata piece from UDA featuring an imprint of his actual hand.