Part two of our NFL Draft review is in, and today we move over to the running backs. After a bountiful selection of rifle-armed QBs, the draft produced a fairly weak assortment of running backs who will most likely have to fight for playing time this fall. This means they will be easier to collect right now so if you pick the right ones to invest in, you should do well as there is still quite a bit of talent that could emerge over time. Just start cracking packs of 2011 Upper Deck Football and see who you find. 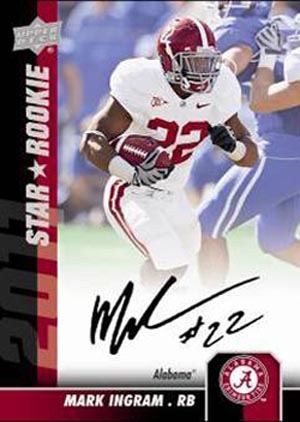 MARK INGRAM (Alabama), SAINTS: By far the biggest talent in the running back class of this draft, Ingram earned a Heisman Trophy during his stellar career at Alabama. Still, the weakness of this draft class is evident as Ingram became the only running back taken in the first round and just barely as only five picks were left when the Saints called his name. He’s fast and dynamic, but he’s also small. Is he an every down back in the NFL? Maybe not, and with Pierre Thomas, possibly Reggie Bush, and Chris Ivory on the depth chart the Saints won’t ask him to be. Ingram could go the way of Darren McFadden or Bush where he becomes dangerous all over the field because of his potential to break a big play, but those guys also split time with change-of-pace backs so their potential is limited. Ingram should have a good career on a very strong team, but it doesn’t look like New Orleans will be the place for him to become a superstar. CAREER POTENTIAL: 4/5; HOBBY POTENTIAL: 3/5 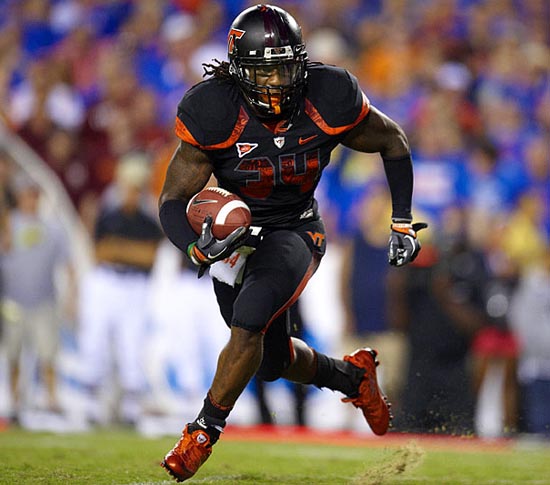 HOKIE NO MORE: Watch Williams start to make some noise in Arizona this season.

RYAN WILLIAMS (Virginia Tech), CARDINALS: Another very talented college running back, another crowded NFL backfield for him to enter. Williams was just as dynamic a running back as Ingram and the other big-time backs on the college scene the past couple years, but Virginia Tech just seems to fly under the radar at times. NFL scouts took notice, however, and I see Williams emerging as a great running back. Only problem is the competition is fierce in Arizona. It seems like it’s becoming a yearly ritual for the Cardinals to add a dynamic running back in the draft in the hope the next one will be the answer. Tim Hightower wasn’t enough so they added Chris “Beanie” Wells. Now they add Williams, who is right there with Wells and Hightower in terms of talent. The question is who will win the battle? Based on the back and forth between Wells and Hightower, it’s an all-or-nothing battle. When one is red hot it’s not a timeshare and the other back sits. Now there will be three guys looking to take the top spot. Of course they could figure it out and have it set up like the Cowboys timeshare where Marion Barber, Felix Jones, and Tashard Choice all split time. The former scenario is more likely, however, and it limits Williams’ value quite a bit. Like Ingram he landed in a tough spot for him to ever become a featured back. CAREER POTENTIAL: 3/5; HOBBY POTENTIAL: 3/5

MIKEL LESHOURE (Illinois), DETROIT: Last year the Lions made a splash in the draft with a big time defensive tackle and running back. This year they also made a splash in the draft with a defensive tackle and running back. While Ndamukong Suh and Nick Fairley can share the defensive line and terrorize quarterbacks, Jahvid Best and Mikel Leshoure will have to battle for a starting backfield job. They could complement each other with Best taking the quick speed back role and Leshoure the role of power runner. In fact, this tandem might actually work out well. Part of the Lions’ decision was probably to light a fire under Best and make sure he returns to being the dynamic running back he showed he could be early in his rookie year, but there may still be room for Leshoure. Of course a running back tandem is really only good for the actual team and rarely for collectors. Not only will Leshoure split time, he will most likely be the backup in the timeshare. It’s still Jahvid Best’s spot to lose, and that could spell a long career of situational carries for Leshoure. CAREER POTENTIAL: 3/5; HOBBY POTENTIAL: 2/5 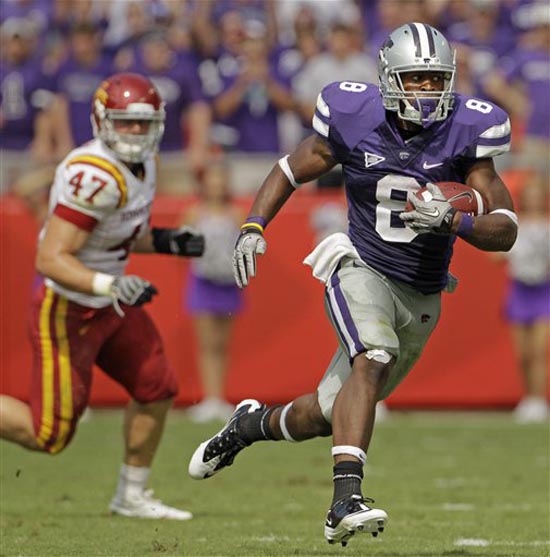 WILDCAT CITY: Thomas should fit in nicely in Miami's backfield this season.

DANIEL THOMAS (Kansas State), DOLPHINS: Yet another rookie running back and yet another crowded backfield that just became even more crowded. However, between the Wildcat and dealing with splitting carries with Ronnie Brown and Ricky Williams, the Dolphins are a team that knows how to spread the ball around. Thomas will get work somehow whether it’s on special teams, wildcat formations, or in some other way. Most likely he will find his place doing some power running to complement the big play potential of the other running backs. Thomas might emerge as a real short-yardage threat and since injuries and age could blindside Brown and Williams on occasion, this could be the start of something very good for Thomas. I like him a lot as a guy who can gradually take over more and more work in a creative offense that gives running backs the potential to explode and have huge games. He will be under the radar so his cards should be easier to get, but he has long-term potential. That to me defines the ultimate investment opportunity when it comes to trading cards. CAREER POTENTIAL: 4/5; HOBBY POTENTIAL: 4/5 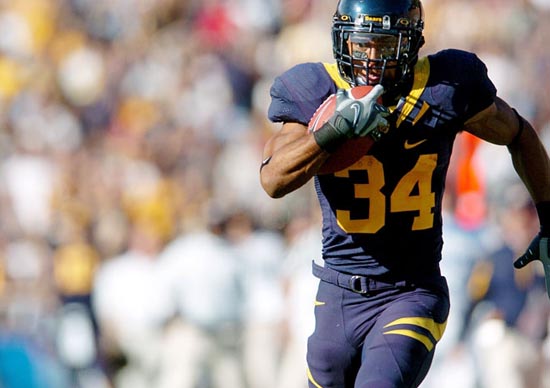 HE COULD GO...Vereen will add another potent weapon to New England's already deep offensive scheme.

SHANE VEREEN (Berkeley), PATRIOTS: What do you think of when you think of a Patriots running back in the Bill Belichick era? A versatile workhorse who can do it all and basically just be there to give Tom Brady another option during short-yardage situations. When Randy Moss left, the Patriots reverted to more of the dink-and-dunk style that they used to win their first couple of Super Bowls with under Belichick. Vereen will be asked to do everything while switching in and out for BenJarvus Green-Ellis and Danny Woodhead. The issue is will there be enough carries to go around. This was a very crowded backfield last year and now it only gets more crowded. For the Patriots that’s fine as they can never have enough weapons and will happily rotate all their backs and move them around the field to drive defenses crazy, but for hobby potential it’s a big blow. Vereen is a talented back who I would have liked a lot as a collecting option, but he will split playing time in New England. Being on a big time team like the Pats will help his value, but his stat line won’t do him any favors. Regardless, if you believe that Green-Ellis isn’t a long-term solution or that he might get hurt, Vereen is gonna be the guy. Woodhead will never be the feature so I’d expect Vereen to take the primary back role possibly at some point. However, the Patriots don’t tend to produce star running backs and who knows how he’ll fare should he be asked to carry the load in the post-Tom Brady era. Vereen will be solid, but the star potential just isn’t there. CAREER POTENTIAL: 3/5; HOBBY POTENTIAL: 3/5

Next week we’ll investigate potential wide receivers that may well be worth the investment. Stay tuned.