St. Patrick’s Day has passed, but at Upper Deck we are still thinking green. On the heels of announcing we will be releasing the first-ever video trading card called EVOLUTION in 2011 Upper Deck Football on April 12, we are at it again. For the past few years, the Upper Deck Product Development Team has been working on a trading card that is eco-friendly and we are pleased to share we are finally ready to bring a recycled card to market.

As many sports card collectors are aware, trading cards were mass produced throughout the 1980’s and many collectors still have shoe boxes filled with these cards. As these cards are hardly scarce, Upper Deck wanted to help collectors who had invested so heavily in them by ridding many of them from the market. About six months ago UD started a large buyback campaign to do just that, purchasing tens of thousands of these cards and recycling them for a revolutionary new trading card product called 2011 Upper Deck Green Basketball. The card is printed on 100% recycled trading cards from the 1980’s.

“From focus group testing we found there were collectors who were devastated by losses they suffered on mass produced cards from the 1980’s,” said Upper Deck’s Sports Marketing Manager, Chris Carlin. “We believe that we can help make those cards more collectible again by removing large quantities of them from the market. If they become scarce, they will become valuable and we can win these collectors back. At the same time, we believe we are also helping the environment by using those cards to create an entirely new set. We believe that 2011 Upper Deck Green Basketball can help to put a freeze on cutting down trees.” 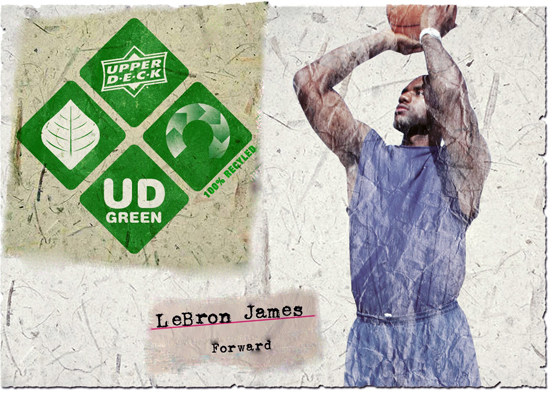 Upper Deck has always believed the conservationists represent a tremendous untapped customer base. This is an exciting new way to tap into sports fans that are also passionate about recycling. And while the new “Green” trading cards may not look quite as nice as some of Upper Deck’s other trading cards, the company reminds fans that they are recycled.

“Yes, we’ve experienced some issues with some of the cards falling a part during the production process,” explains Carlin. “We will be including a small roll of clear tape in each box to aid collectors in reassembling the cards. The corners and edges are a bit of an issue as well as they are not exactly even and sharp like most collectors like. If you think about it though, that should really make the cards more sought after. Like a snowflake, no two cards will be alike; they are all one-of-kind collectibles.”

The 100-card set of 2011 Upper Deck Green Basketball will debut only in your dreams because if you haven’t guessed by now, you’ve been had. Happy April Fools Day sports fans!