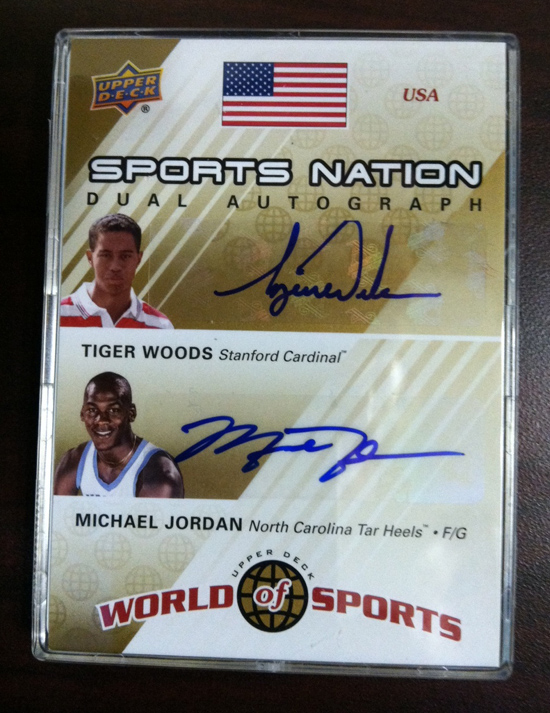 THE PRIZE: Here's one of the five Tiger-Jordan, dual-signed World of Sports trading cards from Upper Deck that will find its way into the mail shortly on the way to its lucky recipient.

The rules of the box-topper redemption program were simple:

3.       Write your name, address, phone number and e-mail address legibly on the back;

4.       Send it in to this address to be entered into a random drawing to receive an Upper Deck World of Sports Dual Autograph card of Tiger Woods and Michael Jordan limited to five copies: The Upper Deck Company, Attn. 2011 World of Sports Box Topper Redemption, 5909 Sea Otter Place, Carlsbad, CA 92010;

Well guess what? We may have waited an extra day to build on the anticipation, but we just finished selecting the five random winners in front of the entire Upper Deck Customer Care group. So without further adieu, the five lucky winners are:

Congratulations! Now keep your eyes peeled for your newly earned dual-signed keepsakes! It will be more than interesting to see what these limited-edition gems (numbered to 5) will fetch on the secondary market. 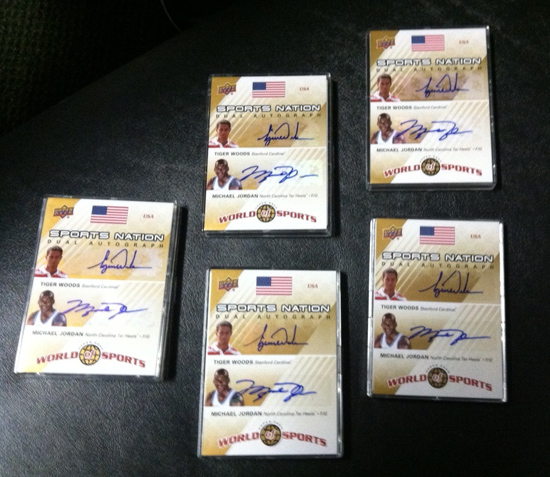 
I had a feeling that today was going to be a great day! I feel so lucky to have won. Thank you Upper Deck for an awesome product and an awesome contest!


Cool! CONGRATS to all the winners! Pass some luck our way ok 🙂 Congrats!


That’s a pretty sweet prize and just in time for Tiger’s run at the Masters. Love the younger pics too.


I’m looking to sell mine. It’s #3/5 and its beautiful. I should take the time to get it graded. If you look at the picture of all 5 above,
mine is the one in the right hand top corner.


when i heard the news i was in the hospital and i instantly felt better and i cant thank upper deck enough,especially since i only sent one enty in,and after a while i am considering selling it for the right price.


Hey bud, I still have my card, never opened it,lol. What number card did you get?