Ask UD: War of Words with Panini, Exquisite Redemptions, How to Redeem, Who’s Signing and the NHL Expo

As Upper Deck’s Customer Care Manager, it is my goal to help educate our collectors and fans so they can have a better experience with our collectible products. I’ll routinely post updates about what we hear on the phones and through e-mails from customers in segments called Ask UD. I hope you find this information relevant and interesting. If you have questions yourself, please feel free to leave a comment and “Ask UD!”

Ask Upper Deck: Chris Olds at Beckett indicated you were involved in a “war of words” with Panini about video trading cards. What’s up with that?

Nick Leslie: Innovation is something very important to us here at Upper Deck. We work very hard to lead the category in bringing the next big thing to market. We proved we can do that again by being the first company to bring a high-definition video trading card to market earlier this week when 2011 Upper Deck Football hit store shelves and EVOLUTION cards were being discovered. At the time, we felt it was necessary to share the differences between our card and their card. And for the good of the industry and the success of video cards, I’m glad Panini paid attention to me. 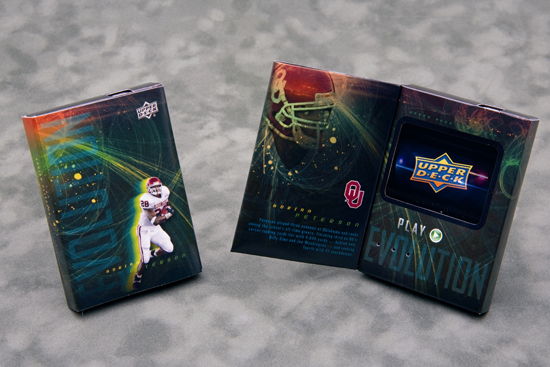 Upper Deck’s EVOLUTION video trading cards have been creating some much needed buzz for the industry.

In the earlier blog that Chris Olds at Beckett commented on, I shared that their card was only a conceptualized mockup, where we had an actual line of video trading cards ready to go out. The folks at Panini confirmed this to be true by releasing an updated image of their card that looked completely different from the mockup they first shared.

My second point was that their mockup looked more like a video player and not a trading card. I’m glad they took my advice by changing it up to look more like a trading card. Had they released it as they had initially planned, it would not have gone over well. It is good to see they have looked at our first-to-market version and made some updates as well. Initially they shared they would have batteries in the card, now they have shared they are planning on adding a USB port just like Upper Deck EVOLUTION. I didn’t see a way to turn the device on or off like our video card has, but I’m sure they’ll figure that out as well by looking at EVOLUTION more.

My third point speculated on when they might launch it. It is good news that they will be able to get it out this season. I just wish they wouldn’t continue to call it the “first” video trading card as it just creates a perception that they are lying to the public since our card is live and already in the hands of collectors. We joke around the offices here that shortly Topps will be announcing they are coming out with the “first” video card. Panini should just call it the “first video basketball card” and that would be fine. Unless of course Upper Deck has an EVOLUTION card featuring Michael Jordan or LeBron James prior to their June launch. Hey, I told you we like to lead the category, right? 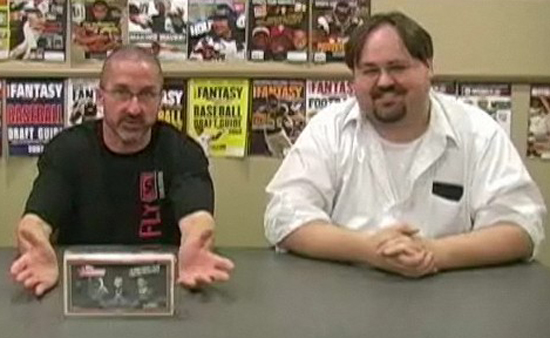 Tracy Hackler (left) of Panini and Chris Olds (right) of Beckett are good friends from their days working together at Beckett Media.

One of the last things I would like to say in terms of a “war of words” would be for Chris Olds who, as many people know, is friendly with several folks at Panini including their Sports Marketing Manager, Tracy Hackler. I believe Tracy actually hired Chris at Beckett Media and they worked together for a couple of years so it makes sense they would be friends. Chris alluded to the fact that Panini’s card may in fact be better because it was autographed. We feel strongly that the industry has relied on autographs and memorabilia cards for too long so by bringing innovative new cards to market you can have a situation where a different kind of trading card can be successful. Instead of putting another memorabilia or autograph card in a pack that will further water down those already in the market, we push to find new items to include like Entomology cards, Thoroughbred Hair Cuts cards, Shadowbox cards and now EVOLUTION cards. With EVOLUTION cards performing well selling between $50-$125, they are already proving that they don’t necessarily need to be autographed to be successful.

Those in the hobby still seem a little skeptical on the idea of a video card and that is fine. Although everyone we have showed the cards to has really liked them, we understand that collectors are all different and some are very traditional with how they feel about their cards. So while everyone may not be able to agree on whether video trading cards are a good idea, what you cannot disagree with is the fact they have people talking, especially outside the hobby. Since we made the announcement about EVOLUTION, we have been visited by different members of the media almost every day. These cards get people talking and they shine a light on our business giving us the opportunity to speak to new and lapsed collectors and to try to bring them back into the fold. The more people that know about what we are doing in the hobby, the better. EVOLUTION has brought excitement to the category and that is definitely a good thing.

Ask Upper Deck: I received a “TBD” redemption out of Exquisite football what is it?

Nick Leslie: “We intentionally did not mark the player’s names on these cards as we wanted to reveal them once the signatures came back in house. Having them listed at ‘TBD’ allows us some flexibility where if any athlete takes too long to sign, we can simply remove them from the line-up and collectors won’t be stuck waiting for them. These cards are NOT for members of the 2011 NFL rookie class. The players included in this set are in line with other players collectors are pulling. We will start releasing names in the coming weeks after they have completed signing and we will ship them out randomly to fans who have redeemed them at that time.”

Ask Upper Deck: I pulled a redemption card from a pack, what do I do next?

Nick Leslie: “Athletes have a lot on their plate so unfortunately they do not always get their signed cards back to us before a product packs out. When that happens, we use redemption cards where customers can register their card with us and when the athlete returns the card to us, we send it directly to our customers. We work diligently with athletes to get their signed items back in house as soon as possible.

“If you were lucky enough to pull a redemption card, Upper Deck offers two ways for you to claim it. Customer care reps are available to you Monday-Friday 8:00AM-5:00PM PST and our online service is always available to collectors. The online service is probably the best way to redeem your cards because it is always available to collectors and you can check the status on your cards through it to see when they are shipping and if there are any issues with them. It is easy to setup an account and you can also change your address in case you move.”

Ask Upper Deck: Have you conducted signings with any big names recently?

Nick Leslie: “Yes, some of the biggest names out there to be exact. We recently conducted a signing with Michael Jordan who signed some outstanding redemptions as well as some cards for new Upper Deck basketball sets. 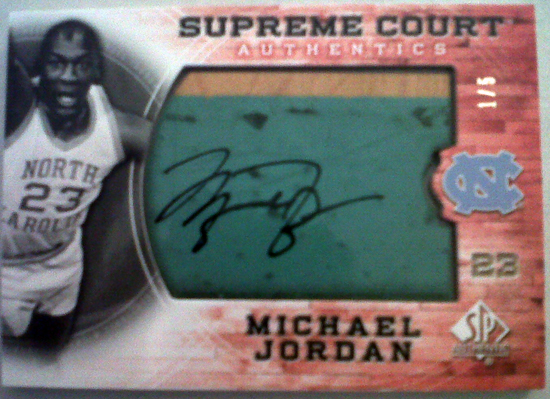 These cards feature part of the floor that Michael played on with the Tar Heels. These cards can be found in 2011 SP Authentic Basketball. 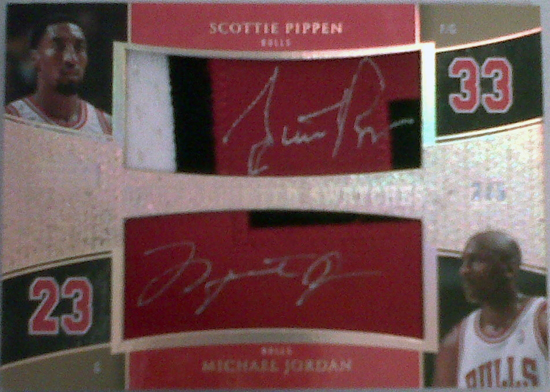 This was a redemption that Michael signed that will be going to one lucky collector who redeemed it!

“We had a couple great hockey players sign for us as well including Sidney Crosby right before the playoffs and the ‘Great One’ himself; Wayne Gretzky.” 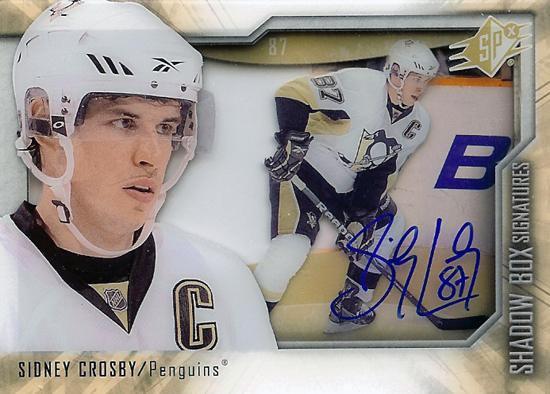 Sidney Crosby’s autograph lends a lot of value to this SPx Shadowbox card. 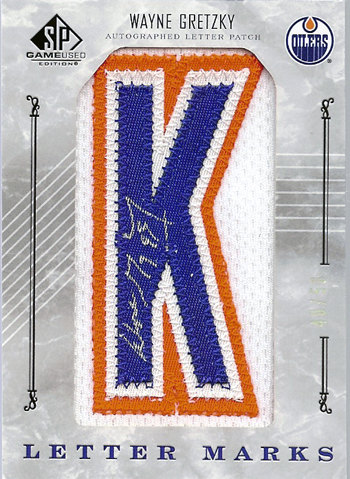 Hockey fans would be elated to find a card like this in their mailbox!

Ask Upper Deck: I am planning on going to the 2011 Sports Card and Memorabilia Expo in Toronto in a couple weeks, will Upper Deck be there? 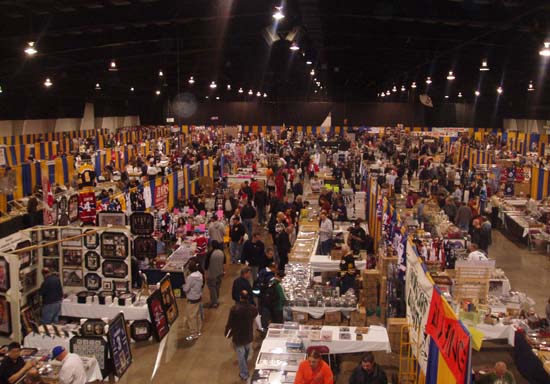 Nick Leslie: “We absolutely will be there! We will be sharing more details about our plans for that event later on this week. Our popular Priority Signings cards will be available through wrapper redemptions at the Upper Deck booth. We will be showing of Upper Deck EVOLUTION video trading cards as well. Our plans will be similar to what we did in the Fall, check it out here. See you in Toronto!”


If I have an Upper Deck redemption card in basketball for someone not named Michael Jordan, will it be made?


Kudos, Nick!
This was a very informative and insightful blog. I’m glad to see UD sticking up for their innovations.

Now, on the checklist there is already Sam Bradford, Tim Tebow, Colt McCoy, Clausen and other 2010 Rookies. So what you are saying above is the TBD are not 2011 Rookies and since the signature nameplate set of 35 already have card numbers, you are just going to randomly assign the TBD signature nameplates based on who returns them?


be nice if your video cards of jordan and lebron are of them with nba uniforms. be worth more then in their high school stuff.


@Paul. First off thanks for reading 🙂 To answer your question YES. Basketball redemptions that are of players not named LeBron James or Michael Jordan are still being produced and pursued for autographs so we can get them to our customers.

@Jeff We are working hard to get the final checklist out to the public. Thank you so much for reading and being patient with us. I don’t know who started that rumor, I felt it was important to set the record straight concerning the 2011 rookie class.


can’t we just all get along???? look everybody knows upper deck has eaten up the card market. don’t you own topps??? and for who is friends, isn’t that the nature of buisness?? wouldn’t you, and don’t you at upper deck ever hired a friend to keep close when you open a new company??? one you can trust.
bill adams


The Beckett bias towards Panini is pretty easy to see guys. Olds loves Hackler because he’s the only one that responds to his seemingly non-stop WWE tweets. Who cares if Panini’s cards will be autographed, that just means we will never see them since they have so many redemption issues. Spend just five minutes on the Donruss Facebook page and you’ll see that, people are talking about a class action lawsuit. You’ll never hear Olds talk about that though…

So who can my TBD 2010 EXQUISITE FOOTBALL EXQUISITE SIGNATURE NAMEPLATE X #’D TO 5 be?

Is it going to be somone on the current checklist or someone new?


I have a question for “Ask UD”

Q: When you do a patch-heavy product like The Cup how many jerseys of each player do you go through? Many players are included in Limited Logos, Signature Patches, Emblems of Endorsement, Honorable Numbers, and other patch sets at the same time and it’s hard to imagine hundreds of patches coming from one jersey. Obviously this isn’t an issue for rookies because of photoshoot material but for veteran players it must be difficult to obtain enough material to do these sets.