Upper Deck’s upcoming 2011 Marvel Beginnings set brings a thrilling dichotomy to the modern mythology of the Marvel Universe. It will honor the traditional legends by updating them with intense new artistic interpretations. Comic book fans around the globe will once again be able to study superhero stats and stories on the backs of their favorite trading cards, while celebrating the coolest characters ever created through fresh new compositions.

Marvel Beginnings is going to make your favorite Marvel characters shine by polishing up their legendary history. In May, the first part of this three-set release will roll out a swarm of heroes and villains. Each base card will combine a loud modern portrait with a small snapshot of that characters origin story. Upper Deck is bringing some exciting new subsets to the entertainment market with die-cut, holofoil and Micro-Motion inserts cards. Upper Deck has been hinting about another insert in this product that will have everyone talking as well. We’ll just have to see what they come up with there.

And then, to top it all off, certain lucky collectors will own original art the likes of which the hobby has never seen. Sketch card artists were given the freedom to interpret the Marvel Beginnings theme in any way their muses moved them, and they achieved spectacular results. These are true one-of-a-kind collectibles that could hold their own on a museum wall. Imagine what will happen to the eyes of the fortunate fanboy that pulls one of these. 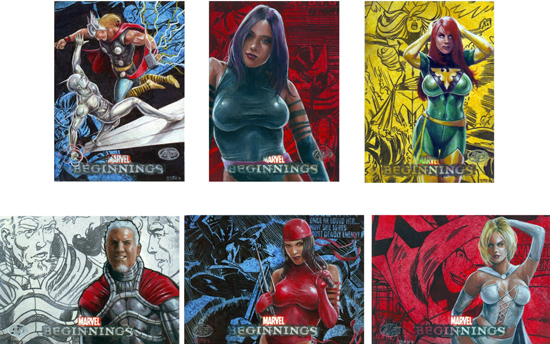 The artwork of the incomparable Charles Hall

Charles Hall actually applies oil paint to the surface of his cards, and his work has taken the origin story to another level. Detailed drawings of the character’s appearance were applied as a background, followed by his usual mind-boggling brushwork. This was an utterly brilliant idea that was executed to perfection. 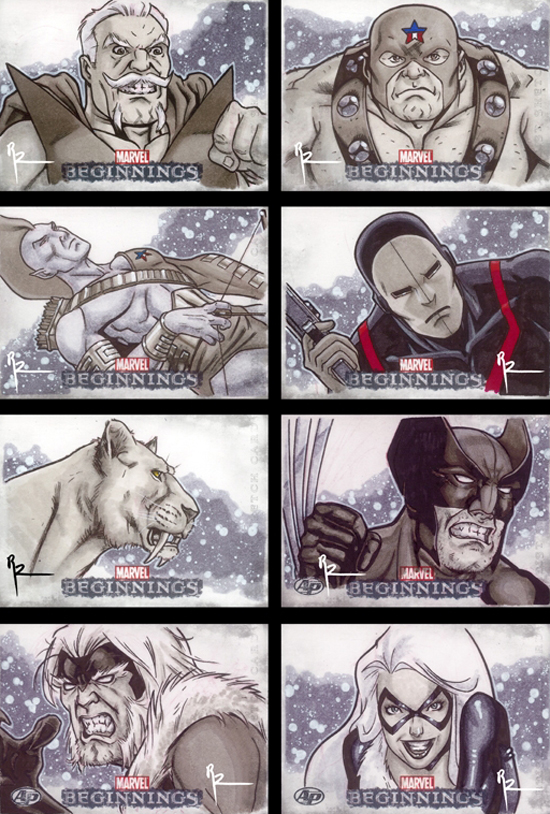 Remi Dousset brings the stars out at night

Remi Dousset remained regal with his sketches, and they create a sense of timeless truth. With so many fans flocking to each new media outlet, Marvel Comics characters are becoming more real with each passing day in the imagination of our species. Pretty soon they will be considered family ancestors, and they look like it already on these sketch cards. 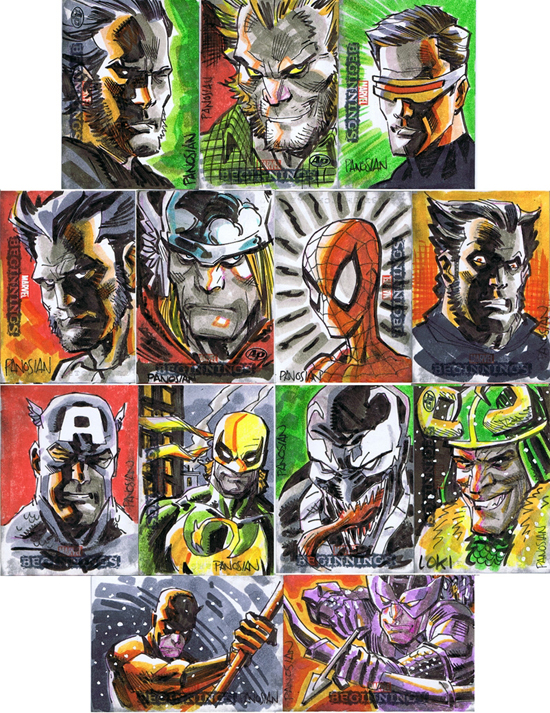 Dan Panosian turns up the volume way past the top of the dial. His cards, like all the other sketches, will be hidden in small foil wrapped packages. They will surely start screaming as soon as they are released. It is a style that is rather rock and roll. 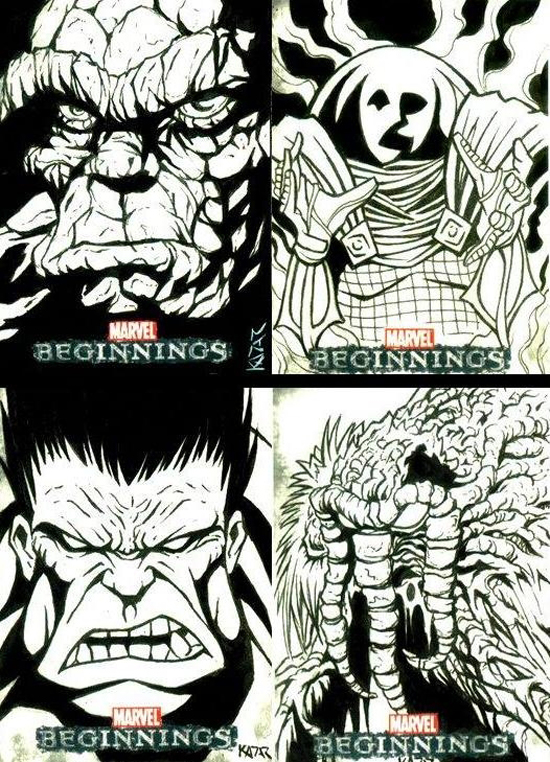 The detail in work by Frank Kadar is simply amazing!

Frank Kadar brings our sketch card survey to a close with a crazy combination of classic and contemporary. His work is intense, yet structured and refined. Collecting original art sketch cards provides an opportunity to own an actual piece of pure creativity. Getting your hands on a Kadar would make you a champion.

Keep your eyes peeled for the 2011 Marvel Beginnings set when it hits store shelves in early May. It will bring the thrill back to Marvel trading cards, and it will provide a cardboard kick like this hobby has never seen.

Rian Fike is a teacher, writer and an expert on comic sketch cards from Miami, Florida. He runs a sports and entertainment blog called Full. Body. Transplant. as well as a blog where he features the work of sketch card artists called The Sketch Card Saloon.