What’s Wrong with the Heat?

Don’t look now, but the “South Beach Trio” is starting to swoon. LeBron James, Dwyane Wade and Chris Bosh – the three basketball musketeers who turned the NBA upside down last July with their joint announcement that they were taking their collective talents to South Beach – can’t buy a win these days. They’ve lost five straight games, including four at home, and folks are starting to wonder why. But let’s face it; the Heat aren’t exactly in dire straits just yet. They’re currently sitting in third place in the Eastern Conference standings, 22 games above .500. But what about the last week? Well, let’s break it down and see what’s up with the Miami Heat.

Here you have the two-time defending league MVP in LeBron James joining forces with 2006 NBA Finals MVP Dwyane “Flash” Wade and Chris “I’m Finally Out of Toronto” Bosh, a five-time NBA All-Star who’s averaged 20.2 points per game since entering the league seven years ago. Three bona fide superstars with plenty of talent who seem to have suddenly hit a rough patch five months into their inaugural season together. Do they just need more time to develop team chemistry? Do they need a stronger bench to provide productive breathers for the Big Three? Who knows? Evidently not head coach Erik Spoelstra.

“Hopefully guys can be aggressive and contribute more,” said Wade following last night’s 107-95 loss to Portland. “There are guys on the bench that can help us, no question about it. That is all on coach. We’ve had guys like Eddie [House] help us win games and James Jones, etc. He’s going to have to decide whether or not people are on the floor.” 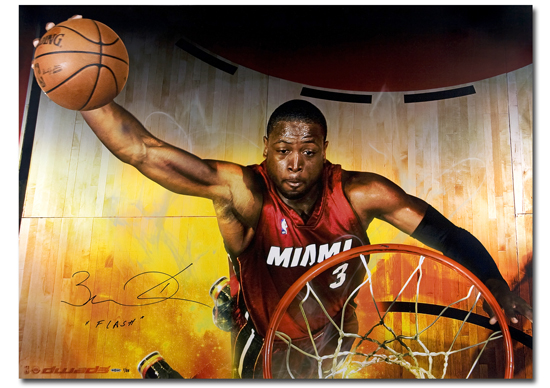 Dwyane Wade has been hitting on all cylinders, just like his sweet signature on this over-sized print from Upper Deck Authenticated.

Wade has been on fire the past five games. He’s averaged 23.4 points per game including a game-high 38 against Portland. LeBron hasn’t been too shabby either during the losing streak; he’s averaged 27.8 points. What about Bosh? Well, besides contributing just seven points last night, he averaged 18.3 points per outing the previous four games. They’re getting looks, shots and points. So what’s the problem? Their bench, or perhaps lack thereof.

In last night’s loss to the Trail Blazers, the Heat bench was outscored by Portland’s, 41-8. The game before that (an 87-86 loss to Chicago) the Heat bench chipped in just six points. LeBron hasn’t sat down once in the second half during any of the team’s recent losses. Mike Bibby, a good outside shooter who just joined the team a week ago, has only seen sporadic action since arriving. So maybe it’s all about getting the other 12 guys on the team involved in some way. Or maybe it’s just playing better defense and committing less turnovers. After all, the slide started on Feb. 27 against the Knicks when the Heat watched a 15-point lead in the second quarter disappear. Two games later, they blew a 24-point advantage against the Magic. 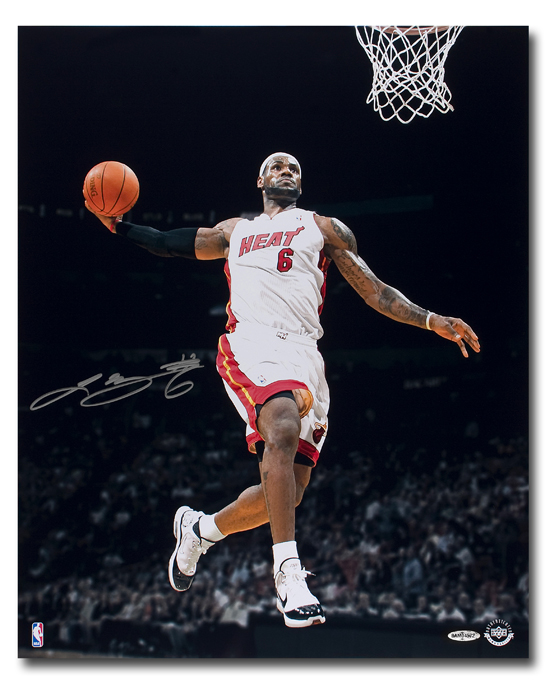 Few competitors get in LeBron's way when he's making his move to the basket. His tomahawk jam is captured beautifully by UDA in this 16" x 20" signed print.

Their first month playing together was nothing to write home about as the revamped Heat started out just 9-8. But then they managed to win 22 of 23 games from Nov. 29 through Jan. 9, which included a run of 12 straight victories and 13 consecutive W’s on the road, they found themselves at the top of the Eastern Conference. In fact, their record at that time (30-9) represented the best start to a season from any Heat team in history. But now they’re starting to wither, so people are getting nervous. Some folks are smiling at the Heat’s recent misfortune, while others are simply saying “I told you so.” Whichever the case, the Heat will be in the hunt when the playoffs roll around. Now all they have to do is figure out why they can’t close out close games.

I think Spoelstra just needs to make some strategic substitutions at the right times and stop leaning so heavily on LBJ and D-Wade to do everything. Even superstars get tired sometimes, you know. Let’s see what happens against the Lakers on Thursday night. If anybody’s due for a loss, it’s Kobe and company.