Conference tournaments closely followed by the start of the NCAA Tournament provide two of the best weeks of the year for college basketball fans. This year was no exception, with upsets, close games and excitement abounding. The University of North Carolina – Chapel Hill was not immune to the drama, despite being perennial participants in the dance (excluding last year, that is).

Sophomore forward John Henson blocked an in-bounds pass with seven seconds remaining to end this weekend with a close win over the University of Washington, earning UNC its 24th trip to the Sweet 16. With a junior, two sophomores and two freshmen starting for this year’s Tar Heels, the faces continue to change, although the spirit and tradition of the program remains the same.

Michael Jordan, one of the most prominent Carolina Basketball Alumni, was on-site to watch the game and met with the team prior to their win on Sunday. Former players can be found at most tournament games, as well as many regular-season games, supporting their alma mater and their continually growing family of players. 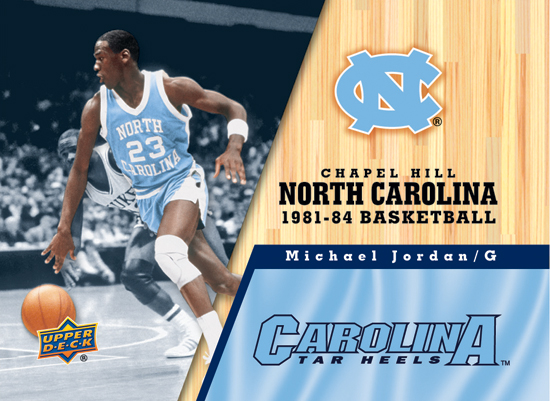 Michael Jordan led the Tar Heels to the 1982 NCAA title. His basket with 16 seconds remaining iced UNC's memorable win against Patrick Ewing and the Georgetown Hoyas.

With alumni like Charlie Scott, Phil Ford, James Worthy, Kenny Smith, Jerry Stackhouse, Antawn Jamison, Vince Carter, Raymond Felton, and of course, Jordan, dotting the program’s past, Carolina has built a history of great teams. Coached by Hall of Fame greats such as Frank McGuire, Dean Smith and now Roy Williams, Carolina has won five national titles, tied for third-most in NCAA history. Great games mark each year, from the ’93 championship win over Michigan and the “Fab Five,” to one of the many epic Duke battles over the years. 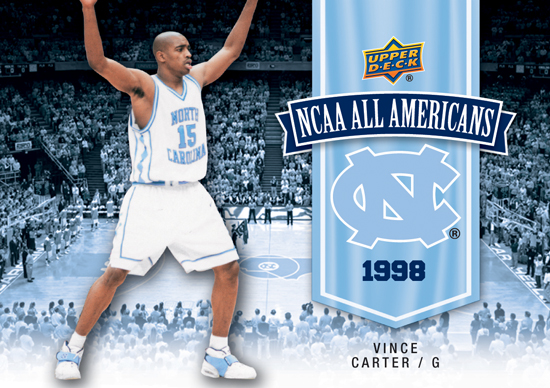 Vince Carter helped the Tar Heels maintain their domination in the NCAA tournament during the '90s.

All of this history, winning tradition and camaraderie has been captured by Upper Deck in its University of North Carolina Basketball card set. A 90-card set dating back to the 1920’s, it includes many of the players and coaches that built the program, as well as the games and seasons that have made the team famous. Scattered into the mix are autographs of the greats that played with North Carolina and inserts including rivalry games and players whose jerseys have been retired.

Miniature replica championship banners are also inserted into each blaster box, one for each of the five titles Carolina has won: 1957, ’82, ’93, ’05 and ‘09. Pick your blaster box carefully as a total of 23 Jordan-signed banners from the ‘82 season exist, which were were randomly inserted into the product! While I’ll definitely be chasing one of those Jordan-signed-banners, the cards are a beautiful representation of the program Carolina has built over the last 90 years, and reason enough to buy at least a box. Maybe I’ll buy one for each win Carolina has in the tournament – hopefully four more!


How many diff. people have Autographed cards in this product?