A year ago this month, I met my three brothers – Tom, Tim and Pat – in Phoenix to catch our first glimpse of Cactus League Spring Training action. Four days and three nights of bouncing around various ballparks ensued as we ate, drank, watched and laughed our way into Spring Training heaven. It was a great time had by all, so we decided to partake in our second (now annual) outing just this weekend. Like last year’s excursion, my brothers all flew out from the east coast – Pat from JFK in New York; Tim and Tom from Washington National in D.C. – while I made the 375-mile trek from San Diego behind the wheel of my 2002 Jeep Liberty. The drive lasted six-and-a-half hours but the time went by relatively quickly as I couldn’t wait to start watching baseball, catching some Scottsdale rays and reminiscing with my bros. 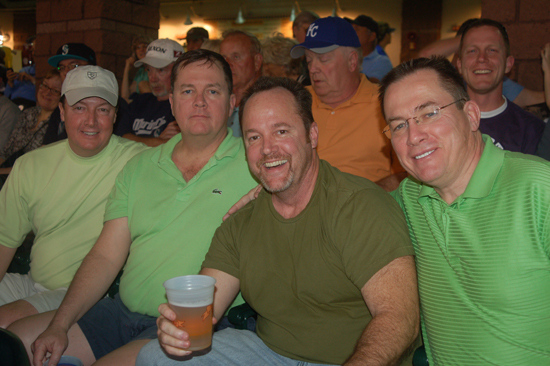 WEARING OF THE GREEN: Since we're all Irish (Pat, Tom, Terry and Tim) and it was St. Patrick's Day, we decided to collectively go green at the Royals/Mariners game on March 17 at Surprise Stadium.

As I approached the Phoenix city limits, I got a call from Pat that they had taken a cab from the hotel in Tempe to scout out a new ballpark in Scottsdale called Salt River Fields at Talking Stick. It was a beautiful, 11,000-seat stadium and was the new spring training home of the Colorado Rockies. And since my brothers had all arrived earlier that day (they beat me by a good six hours), they figured they’d get a jump on the action and catch their first game of the long weekend between the Rockies and White Sox. The game was already in the sixth inning by the time Pat called, but since they figured I was getting close, they brought me up to speed. Not knowing exactly where Salt River Fields was, I got on the 101 Loop (per Pat’s recommendation) and set out to find it. It was just after 3 p.m. and my adrenalin was pumping.

I got up on the 101 Loop going north and figured I’d be there in no time; 15 minutes tops. Wow was I wrong. The 101 Loop wraps itself completely around the City of Phoenix in a perfect 360-degree circle and as I discovered in short order, I was at the 90-degree mark and I needed to be at 270. Or as Pat put it, “You want to be at three o’clock and you’re at nine o’clock. Just keep driving.” So I drove…and drove…and drove some more. I felt like a NASCAR driver. I was flooring it, but still had plenty of distance to go. I kept getting text messages from Tim during my extended detour: “Come on to Pima Rd. See you here. Top of the seventh” and then “Top of the ninth. Where are you?” I never yearned to find an exit ramp more in my life as I did to find “Pima Rd.” I had already driven 400 miles so nobody wanted to get out of their car more than me. Another 20 minutes went by before I finally pulled into the parking lot at Salt River Fields. The game was just ending – Chicago won, 12-6 – and five minutes later, Tom, Tim and Pat were filing out to give me big bear hugs and to thank me for showing up to be their designated driver.

Here’s where we had a choice to make. Do we head back to the hotel in rush-hour traffic or do we find a nice restaurant to hunker down in for an hour before we make our way to Surprise Stadium to watch the Kansas City Royals host the Seattle Mariners? We selected the latter option and 10 minutes later found ourselves walking into Mastro’s Steakhouse. We enjoyed a great meal over the next 70 minutes and then set out to find Surprise Stadium in, wouldn’t you know it, Surprise, Arizona. We were a little late to the game, but soon settled into our seats 15 rows behind home plate to watch the Royals pummel reigning Cy Young award winner Felix Hernandez. “King Felix” was tagged for nine hits and six runs in just four innings’ worth of work and the Royals went on to score a 9-1 victory. 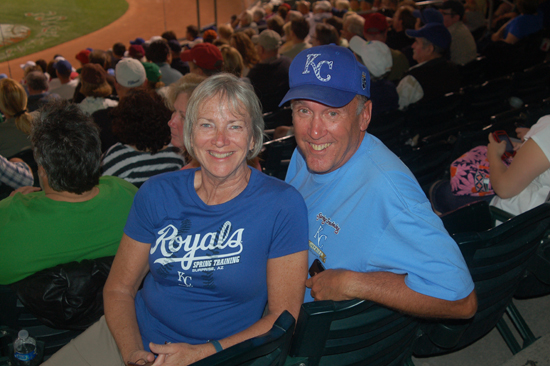 THE FAMILY GREB: Cindy and George Greb, season-ticket holders from Kansas City, were two of the nicest people we met this weekend who wear their loyalty, quite literally, on their sleeves.

During the course of the game, as Tim and I were discussing baseball, the NCAA tournament and life in general, I couldn’t help but notice that the gentleman sitting directly in front of us was wearing a Royals cap that read “2010 Season-Ticket Holder” across the back. I had two questions to ask: 1.) why did his allegiance rest with the snake-bitten Royals?; and 2.) why did he ever purchase season tickets? I had to know, so I tactfully asked.

It turns out his name was George Greb. He was a K.C. native, retired and in town for a week to catch as much Royals baseball as he could alongside his pretty wife, Cindy. The season tickets had been in the family for as long as he could remember and he took possession of them in 1995. He explained a little bit about the history of the Kansas City A’s who moved to Oakland before the Kansas City Royals were born in 1969 and how he’s been a lifer ever since. We talked about three-time American League battling champ George Brett and the team’s only World Series title in 1985. Greb was a wealth of information about the Royals and their history and I was duly impressed. We had met a fellow student of the game. And his wife was a genuine fan of the game; she really enjoyed going to spring training.

Following our jaunt back to the hotel, Friday rolled around in no time and we were off to Tempe Diablo Stadium, the home of the Angels, where the team that’s still trying to figure out if it’s from Los Angeles or Anaheim was hosting the San Diego Padres. It was  a perfect 84-degree day and we were catching the action from the stands above third base. We met plenty of people – everybody’s in a good mood at spring training – but mostly enjoyed each others’ company and shared beers and hot dogs throughout the seesaw battle. The game ended with the Angels prevailing, 7-6; a pair of solo home runs by Halos slugger Bobby Abreu proved to be the difference. But as it turns out, this wouldn’t be the tightest game we’d see. 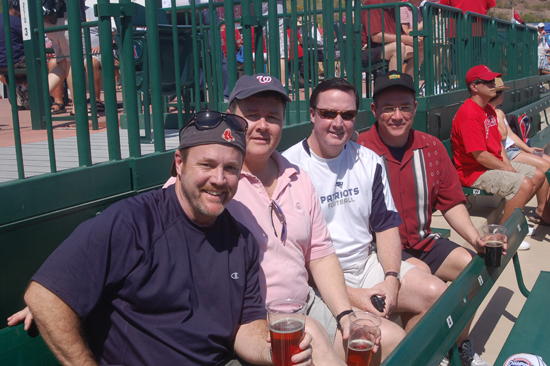 SUN DEVILS: We soaked up additional suds and sun on Friday afternoon watching the Angels outlast the Padres, 7-6, at fiery Tempe Diablo Stadium.

On Saturday, we traveled to a park that none of us had visited before: Camelback Ranch in Glendale, a sprawling, beautifully designed 13,000-seat gem that served as the Cactus League home of the Los Angeles Dodgers and Chicago White Sox, depending on the schedule. This day we watched the Dodgers, and their new manager, Don Mattingly, host the Milwaukee Brewers. The Dodgers jumped out to an early 1-0 lead, before the Brew Crew came back to take leads of 4-1 in the sixth and 6-2 in the seventh. All of which set the stage for a crowd-pleasing, three-run rally by the boys from Chavez Ravine in the bottom of the eighth and a solo run scored by Aaron Miles (off a single by Juan Castro) in the bottom of the ninth to knot the score at six. Two batters later, Eugenio Velez hit a single to center, but Castro, who was standing on second, was thrown out at the plate by center fielder Chris Dickerson for the third out. 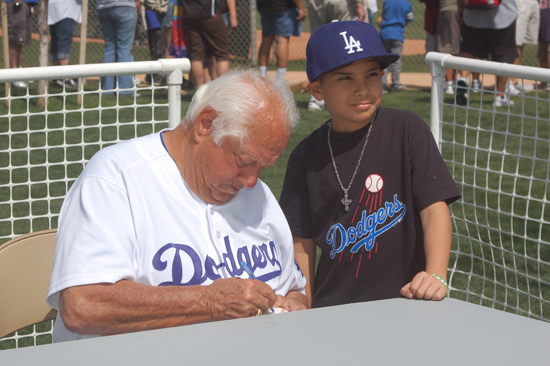 FIELD GENERAL: Former L.A. Dodgers Manager Tommy Lasorda was on hand signing for the fans, even the young ones who probably had no earthly idea who the old man with the white hair was.

The teams played one extra inning before the managers decided to call it a draw as there was no need to further risk injury in what would amount to a meaningless game in the preseason schedule. It brought me back to the 2002 MLB All-Star Game when the AL and NL squads battled to a 7-7 tie through 11 innings.

The day, as it turned out, had plenty of ups for us. We got to see former Dodgers manager Tommy Lasorda signing autographs for the fans; Pat caught a game-used ball tossed to him by the Dodgers batboy, which he immediately handed to Tom for the latter’s eight-year-old son, Tomás; and Tim and I took turns trying to take great shots of the action, both on and off the field. 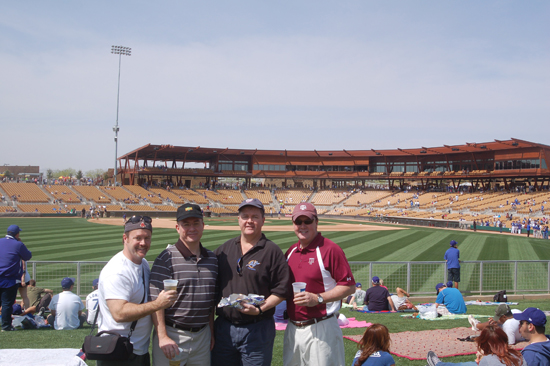 As Saturday rolled to a close, and we were finishing up a nice Italian dinner, I asked each of my brothers for their individual assessments of what was their favorite part of the weekend. Pat went first: “I didn’t know what to expect coming back. I mean, we all had such a great time last year, so I didn’t have any thoughts of surpassing last year’s trip. But the new ballparks we saw this time around were even better, so this year’s trip over-exceeded my expectations.”

Tom was next: “My favorite part of the trip was walking through the nice new Camelback Ranch complex with my brothers, watching batting practice and the mellow crowd gathering. I enjoyed seeing the people from all over the country and all over the world coming together for a nice afternoon under the blue sky. And I was thinking how nice it will be to come back with Tomás one of these days.”

Then Tim added: “I loved the reminiscing, the story-telling and the laughter.”

Even batting cleanup, I couldn’t have summed it up better myself.


hi guys, we were in pheonix from the 5th through the 12th for spring ball, also returned on the 17th through the 20th. just got in. this was our 25th year in a row.
thank’s, bill

Looks and sounds like you guys had a great time. I’m jealous. Hope all is well. I’ll follow-up with another e-mail. Your cuz.


Great pictures. That must have been great to get together with all of the bros. You only go around once in life so you might as well enjoy it.