Corey Haim Snubbed at the Oscars

I know it sounds morbid, but one of my favorite parts of the Oscars is Memoriam portion of the show. It’s so sad to see all the amazing performers who we’ve lost over the last year, but it is always a moving tribute. I didn’t realize it as I watched this year, but missing from the line-up of deceased stars was Corey Haim.

Monday we began to hear a bit more about the snub from his fans. His mother said, “A lot of people were pissed off he wasn’t mentioned and this was his last chance to be honored by his peers.”

His dear friend Corey Feldman said, “I am gravely disappointed that the public outcry of the voices of Corey’s supporters and fans on his omission from the SAG memorial was not heard by the Academy. Corey’s films have earned the industry over a half a billion dollars and his work remains an inspiration to young artists world wide.”

Corey Haim definitely had serious struggles with substance abuse, but many believe that alone is not reason enough to be snubbed in a program like this, especially after others with similar struggles have been honored by the Academy. Haim had appeared in dozens of films and also worked in television. I personally grew up with his movies and enjoyed the parts he played on the big screen. Upper Deck had the chance to work with Haim who signed for a couple different trading card releases over the years. 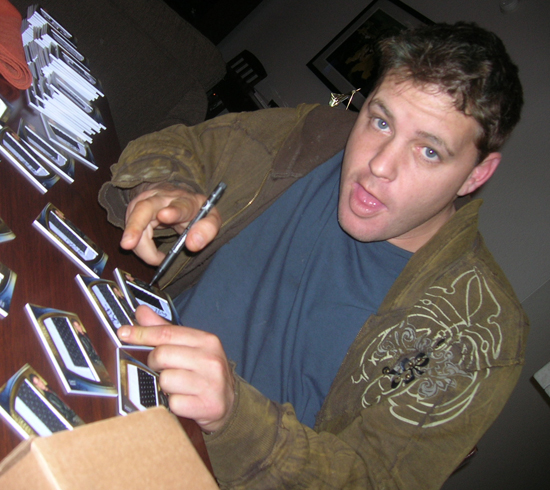 Corey Haim signing Upper Deck cards prior to his passing

As a thank you to his fans, we will be giving a way a Sweet Spot Autograph card of Corey Haim. Corey loved the Vikings as they were one of the closest NFL teams to his hometown of Toronto. He also loved the color purple. For your opportunity to receive this card, leave a comment stating which film you would have liked to see Corey featured in if he was to have made it in the Oscars Memoriam program. We will randomly select a winner at random on Friday, March 4, 2011. Rest in peace Corey. 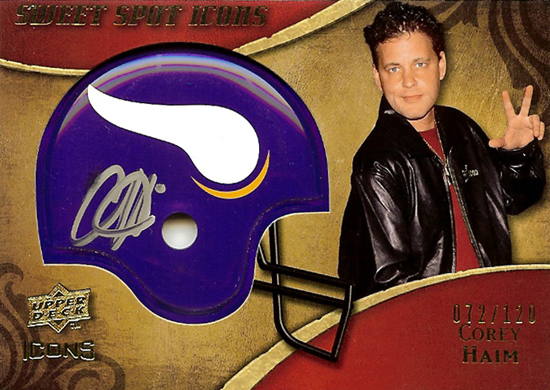 
Have to go with everyone elses response with the Lost Boys


Lucas because of his awesome performance.


Thanks guys and email is on the way!!!