Catching up with Illustrator Frankie B. Washington

Frankie B. Washington is a world-renowned illustrator and sketch artist whose works have been published over the past two decades through a variety of outlets including advertising agencies, production houses and comic book publishers, to name a few. Nowadays, he’s also doing his fair share of artist sketch cards for many of Upper Deck’s latest Entertainment-based properties including “Thor” and “Marvel Beginnings.” In fact, Upper Deck Entertainment is giving away several artist sketch cards through its new UDE Facebook page, so check it out. Now kick back and take a listen to one of the industry’s most accomplished illustrators. 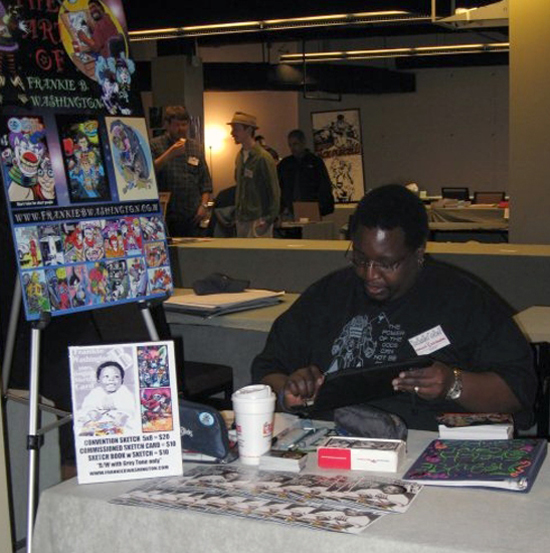 The Master Illustrator: Frankie B. Washington.

What inspired you to get into illustration?

“The first comic book I purchased was a Spider-Man and from that point on I was hooked. My mother used to let me draw on the brown paper grocery bags and sometimes she would help me out. I naturally took to illustrating afterward as a way to express my overly imaginative mind.”

Who do you see as your heroes in the industry?

“Herb Trimpe is definitely someone who I admire greatly as an artist. I would also say that Mike Mignola as an artist and how he handled this Hellboy property is up there for me, as well as Robert Kirkman [Walking Dead, Invincible]. I really respect individuals who take their concept as far as they can to the top. I aspire to be like them.”

What has been your craziest experience being a part of the industry?

“Probably now; drawing the amount of cards I have for Upper Deck for these Marvel properties.” 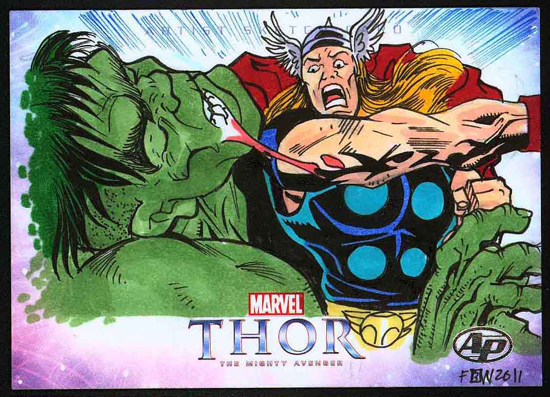 What are your thoughts on the whole Comic-Con boom over the last few years and what the event has evolved into?

“The last Comic-Con I went to was in New York 2009, but I wasn’t in artist alley. I just went with friends. Clearly the impact of multimedia has permeated the essence of Comic-Con. I remember in 2001 at the San Diego Comic-Con, I was part of this company called Bitch Press formed by Barbara Hughes, widow of Steven Hughes [Lady Death)] and Shirley Simms [The Creep]. It was a cool time because comics were still strong. I met Mark Alessi, owner of CrossGen, and did a sketch for his daughter. And the presence of the film industry wasn’t as major as it is today.

“I personally think that it’s a good thing that various comic-book-related properties have an opportunity of evolving into the multimedia arena.”

What does it mean to work on an Upper Deck and/or Marvel licensed project?

“As an illustrator who has worked primarily in advertising, my view on the chances of working on a recognizable brand like Upper Deck is like getting the gift I really wanted for Christmas: Amazing! I really wasn’t expecting to ever have the chance to work on a Marvel-licensed property, especially when given the opportunity to draw the characters I really like. When I got the email, saying that I was part of it, I called Upper Deck to thank them.” 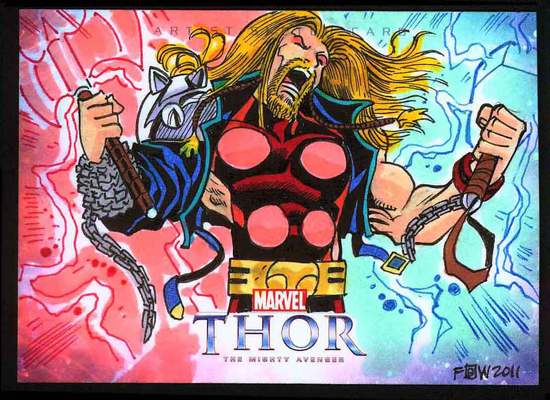 The Mighty Avenger: More of Frankie B. Washington's work.

How do you feel about sharing comic art through sketch cards instead of comic books?

“Honestly, I did not know anything about sketch cards until May of 2009 when I was approached by 5Finity Productions to do some Archie Charity Cards. I’ve done storyboards for film and television but it intrigued me that there was a community devoted to the collection of artwork that measured only 2.5 x 3.5. Since my baptism into the industry, I’ve found that drawing at such a reduced size has allowed me to challenge my artistic skills more so than working on a 11 x17 comic book format. The ability to tell a story through sketch cards is now the force that drives me every time the pencil hits the paper.”

I believe your wife is also an artist. If so, how do your styles influence one another?

“Crystal is my muse and her drawing style is very intricate and eclectic. I find inspiration when I look at the amount of detail she applies to her illustrations, but her real artistic prowess is in handmade items like her Dreamcatchers and assorted jewelry. The meticulous nature she applies to her work motivates me to do the same for my sketch cards and vice versa. She has become more disciplined with the theme of her works which I think has rubbed off of me.”

You recently did sketch card work for Voltron, Penny Dreadful, Thor and Treasure Chests & Booty. These projects all hit a different demographic. How do you change your style to accommodate the different needs of each project? Is it easy to just flip the switch from one to another?

“I actually did sketch cards for Thor and Treasure Chests & Booty, a double-page spread for the Voltron art book and pin-ups for Penny Dreadful’s new comic book, which I plan to do a back story for. I’ve been a freelance artist for 18 plus years and I’ve mainly worked in the arena of advertising but I also did work at animation studios as well as movie production companies in the past. Due to the various clients I had and still have, I had to learn how to adapt to different needs presented to me. One art director may like a comic-book-style, yet another may like a realistic style. Adaptation is the key to survival for a freelance artist to make it in the art industry.”

Are you excited about the theatrical release of Thor?

“Is this a trick question? Of course, I am ecstatic that Thor is coming out. I expect that it is going to do very well in theaters.”

How do you think fans of the movie will respond to your artwork when they find your sketch cards in Upper Deck packs of Thor trading cards?

“I hope that they’re excited by my interpretations of the characters. I’m more old-school in how I illustrate them because when I was growing up the art of Jack Kirby, Walt Simonson, Herb Trimpe, John Byrne, George Perez and others helped to shape a certain look in my eyes. That I feel has trickled somewhat into my own artwork.” 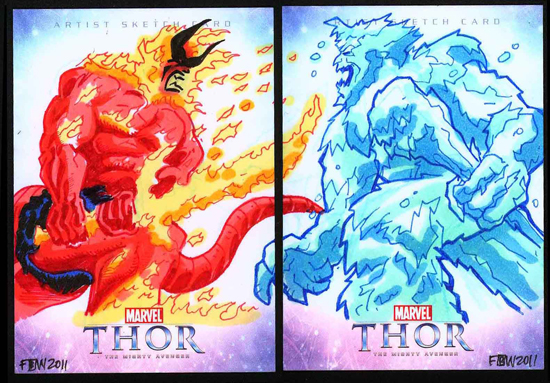 Hot and Cold: Additional Thor cards, interpreted by Frankie B.

What’s the difference between working on toy concepts as compared to comic illustrations?

“Toy concepts are little more defined in  the sense that you are creating something new and when the time comes for final illustration. I have to make sure that the potential client has all the information about this idea all in one glance. Comic illustration allows a broader sense of freedom in the degree that if a particular character’s arm is too big you aren’t penalized for it because the layout of the page is amazing.”

What do you want fans of your work to know about you?

“I’m a Virgo and I work hard to become the best at what I do. I love giant robots and monsters and own a decent collection of Shogun Warriors original artwork as well as toys. I also love reading books by Stephen King, Dean Koontz, Anne Rice and the man himself, H.G. Wells.”

What is your favorite thing to do that’s not related to your profession?

“Go to the beach with Crystal on a warm day and just chill.”

What do you feel is your greatest illustration so far?

“My self-portrait, which I titled “PEACE.” It’s about my first comic book that I tried to self-publish back in 1991. One day I will finish it and probably just print one massive graphic novel for myself.” 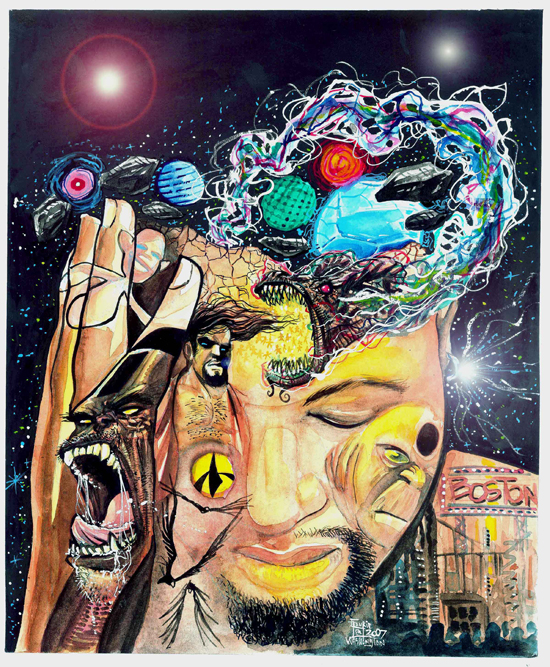 Work in Progress: Washington's most prized endeavor is his "PEACE" self portrait.

What are you working on next?

“Well, I sent in my 5Finity: Manga Mandy & Marvel Beginnings cards and I’m currently close to wrapping up Captain America. I have to do some posters for me and my partner’s property : Robot God Akamatsu: http://www.killingthegrizzly.com/robot-god-akamatsu-by-james-biggie-frankie-b-washington/ and then I onto some comic book pages for Penny Dreadful, Fierce Fun Toys and one more card set called Dungeon Dolls. I’m a drawing machine and I love it!”

How can fans see more of your work and what you are up to?

“Well I’m always on and off on FaceBook with updates so people can catch me there and through my website: http://www.frankiebwashington.com. It has my gallery of works available for viewing.”


Frankie is a great artist… his art here is awesome too !


Thanks Rusty, I’m always working hard to perfect my skills. For any artist out there doing what they dream, remember that complicity is your greatest enemy. We must always be open to challenging ourselves to push our art form to the limits 😉


I love the artwork but the last one gets my eye.I always try in my Aspergers comics to get as deep as that.Showing how an Aspergers person sees the world sliceing my own head open metaphorically to show what it’s like.
You really captured that trying to show the world thru that mans eyes the last drawing.I wish more were done of those more often.It’s inspireing to me as an artist and Aspergers Syndrome speaker.


Frankie is a wildly talented artist and a true gentlemen. I am a great admirer of both his work and collaborative spirit, and look forward to his next exciting news!


Frankie is definitely a talent.
Can’t wait to see more of his work!