We believe that if you are going to handle marketing for a sport, you should make it a point to get to a few games. So we reached out to our good friends at the Los Angeles Kings to pay a visit to a recent game and they took very good care of us. All five members of the UD Marketing team trekked 95 miles north to the renowned Staples Center last night. We figured we needed to bring one more thing to make the night extra special so I grabbed a Wayne Gretzky blow-up card I had in my office so we could show it off throughout the game.

Staples is a great venue for hockey and Kings fans were fired up to be facing off against the Detroit Red Wings. Wings fans were in abundance, however, and definitely made their presence felt in Los Angeles. The Kings scored quickly in the first period, but then the Red Wings went on an amazing goal-scoring run ripping off seven unanswered lamp-lighters! Detroit goaltender Jimmy Howard seemed to be on fire until late in the game when the Kings showed their pride by rattling off three goals to make the game seem a little closer than it actually was. 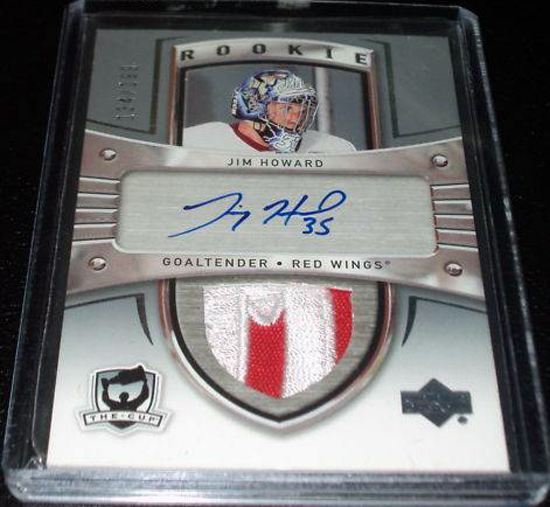 Each intermission I would head out to give away insert cards we brought to kids who thought it was the greatest thing ever. During the game we tried to get the Gretzky blow-up card on the JumboTron, but unfortunately, despite the wonderful antics of Kings Team Mascot “Bailey,” Kings fans did not have much to cheer for. We had a lot of fun watching one of our local teams hit the ice. Thanks to our friends at the Los Angeles Kings for making that happen! 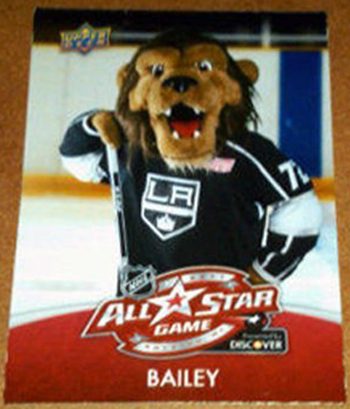 Bailey is one of the best mascots in the NHL!