Upper Deck’s Entertainment division has been going through a variety of changes, but now the company is preparing to release a mix of new products based primarily around the Marvel brand. Trading card game (TCG) and Marvel fans have a lot of questions about what the staff at Upper Deck Entertainment has been up to lately and what they can expect for 2011. We sat down with Upper Deck’s Vice President of Marketing, Jason Masherah, to ask him the questions our fans have been wondering about. If you missed Part 1 of this Q&A, click here. We hope you enjoy the second part of this interview.

Question: Some artists have been sharing images of sketch cards they created for this project online. Do you have anything you can share about the sketch cards from the Thor release?

Jason Masherah: “We think they are going to be a big hit with Marvel fans. We have worked with renowned artists like Jim Cheung, Lord Mesa, Remy “Eisu” Mokhtar, George “GEO” Davis, Butch Mapa and Frankie B Washington.

“Additionally, I’m hopeful fans can help us out with another question we have for the Thor product. There are some sketch cards that can be combined to create a larger picture that is really fantastic. You can see a couple examples of these cards below: 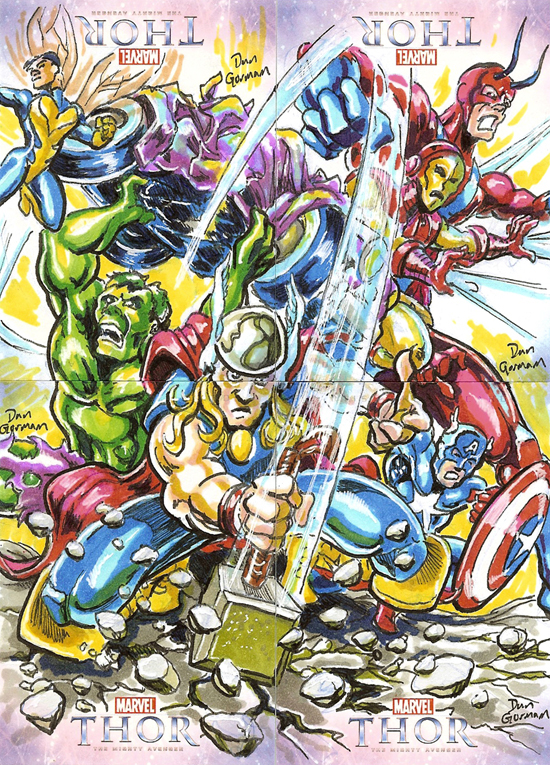 Should we keep these four cards together in one pack or insert them into separate packs? 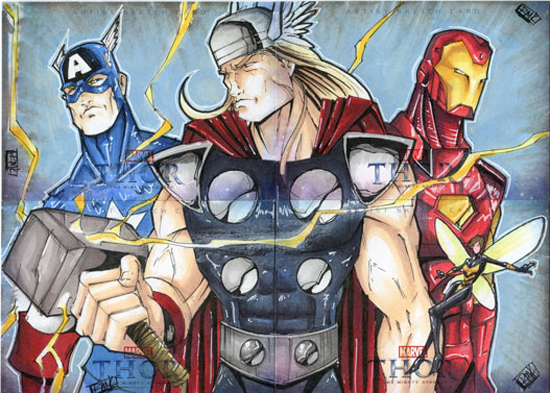 Would collectors be able to put together a four-card image like this if they were inserted into separate packs?

“Now, should we separate them and insert them randomly into packs where collectors will be forced to seek them out in order to put them together? Or should we include ALL the cards in the same pack as a ‘hot pack’ where we keep the art intact for one lucky collector to find? Let us know your thoughts in the comments section below.”

Question: What should Marvel fans know about the new Marvel Beginnings set that’s due out this spring?

Jason Masherah: “Innovation is one of the key drivers for us here at Upper Deck so I’ve tasked our Entertainment staff to really work to reinvent the collectible card category for properties like Marvel. Forget about inserts and autographs for a second. Let’s get down to what should really be important in a Marvel release: characters. Marvel Beginnings will be Part 1 of a three-part series that chronicles more than 500 characters in the Marvel Universe and will be the most comprehensive set ever produced. Each card will feature the highlighted character from an early appearance and then again sporting a more contemporary look. We will have a thorough biography on them to give them the credit they deserve. Think of Marvel Beginnings as the first part of a three-part encyclopedia to the Marvel Universe.

“With that being said, there will be exciting content in the product using new technologies like die-cut, holofoil and Micro Motion insert cards. Sketch cards from artists like Dan Panosian, Graham Nolan, Jim Cheung, Joyce Chin, Cat Staggs, Kate Bradley, Remy “Eisu” Mokhtar, Jonboy Meyers and David Mack. We’ll have autographs from Marvel favorites like Stan Lee, Brian Michael Bendis, Joe Sinnot, Kurt Busiek, Gerry Conway and David Micheline. We have a couple other surprises in store for this product that will have fans scouring to find boxes once it hits. If you love Marvel, this is going to be a pack-opening thrill like you’ve never had before with another brand. It’s going to be a lot of fun.” 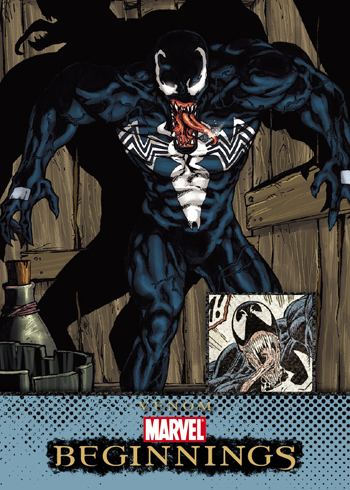 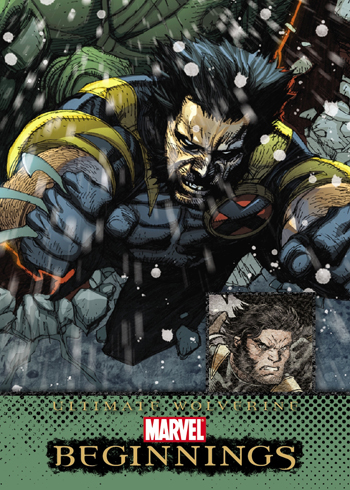 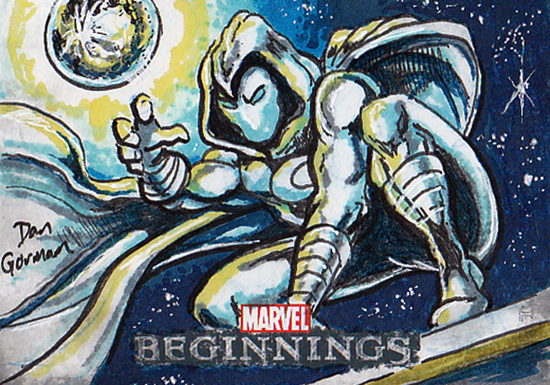 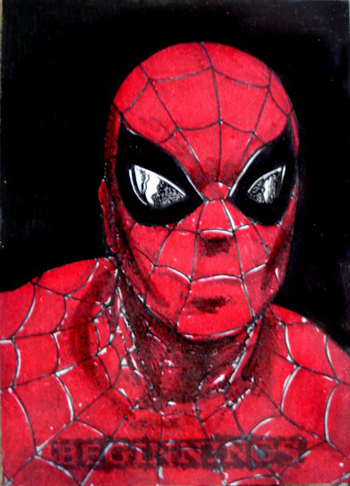 Obscure characters as well as favorites like Spiderman will be featured

Question: After Thor and Marvel Beginnings, you have a product slated around the theatrical release of Captain America. What can you tell us about that?

Jason Masherah: “The trailer just premiered during the Super Bowl and there seems to be a lot of good buzz about the movie right now. Our release will be similar to that of Thor with lots of compelling content including some very unique manufactured patch cards that look great. Sketch Cards, costume memorabilia, and actor/actress autograph cards will also be included. 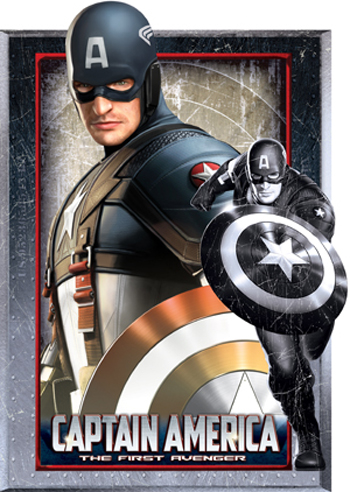 Question: Upper Deck Entertainment hasn’t shared a lot with fans as of late. Do you have any plans to engage fans in new ways and to keep them updated on what is coming out next?

Jason Masherah: “Absolutely. Yes, I feel like we haven’t been there for Marvel fans over the last year in particular primarily because there wasn’t a lot to share. I apologize for that and I can promise you that is going to change. We are happy to announce we have revamped our Twitter page to cater to all Upper Deck Entertainment releases. I encourage fans to follow us and chat with us by clicking here. Additionally we have a new Facebook page for Upper Deck Entertainment where we will answer questions, look for new ideas, share new images and run a variety of fun giveaways. I encourage Marvel fans in particular to “like” that page which they can find by clicking here. You can look for more stories on Upper Deck Entertainment products here on our Blog as well. Additionally, we are looking for writers and fans to assist us there. If you are interested in potentially writing for the Upper Deck Blog on entertainment products and the market as a whole, contact us today at upperdeckmarketing@upperdeck.com.”

Question: What does Upper Deck Entertainment have to say about its past performance in the market and what is next?

Jason Masherah: “As a company we’ve enjoyed some successes and endured some failures. We’ve done some things really well, but we’ve also made some mistakes along the way. We are not preoccupied with the past. We have a new team that’s very motivated to make trading cards fun for TCG and comic book aficionados alike. We’re going to do some things that people won’t be expecting this year and we are really anticipating the reactions we’ll see from that. We have some fresh new ideas to further invigorate the category and our focus is on the future. We can’t wait to show you what we have in store!”


Hey guys, if you’re going to do sketch cards that form one image, you HAVE to put them in a “hot pack” all together, otherwise they’ll never get puzzled out (unless there’s multiples of each sketch and that’s just cheating).

Since each one is part of one image, it would make the collector that much happier if they got all four pieces in one pack. Since you brought it up, it obviously can be done!


Puzzle cards should be done in “hot pack” form. While collectors do not mind chasing a piece here or there, you never know if all of the pieces of a particular puzzle actually make their way into packs. Since all companies hold back a certain percentage of “hits” to replace missing or damaged cards, puzzle pieces might sit in UD’s inventory, never to see the light of day.

I am guessing that UD has already addressed the problem of horrifically large puzzles like there were in Iron Man 2 (some puzzles had 16 pieces!) as nothing is more frustrating than getting a sketch card of someone’s elbow.


I’m doing some cards for The Captain America card set as well as the Marvel beginnings set. I did 1 or 2, 2 card Puzzles for Marvel beginnings and 2, 3 card puzzles for Captain America as well as 1, 4 card Puzzle. I always do lenticular puzzles and always make sure that each card will stand alone as well as together. Hopefully they will be placed together in one pack. I’ve seen some of the huge puzzles done by a few really great artists and I wouldn’t want to get a card with a green elbow.
I look forward to seeing one of my cards featured on Upperdeck’s site and blog


When will Marvel Beginnings Series 2 be released?