Upper Deck’s new World of Sports set hits store shelves today and is unlike anything ever seen before with its robust assortment of trading cards covering baseball, basketball, hockey, golf, soccer and more! It features the best players from a variety of sports and there are no two bigger stars on the planet than Michael Jordan and Tiger Woods. 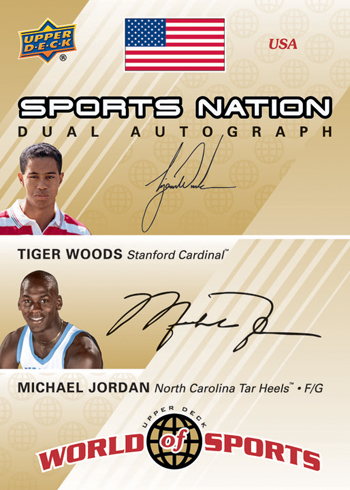 Up for grabs - To take home one of these highly sought after dual autograph cards of MJ and Tiger, you'll have to send in your box tops!

One of the most sought-after cards in Upper Deck’s 2011 World of Sports set will no doubt be the dual-autograph card of Michael Jordan and Tiger Woods that’s limited to just five copies. As we alluded to last week, we want to make sure these limited-edition cards get into the hands of our valued collectors so we are excited to announce a special box topper redemption program. We will be awarding these five gems to Upper Deck fans who have opened boxes of the new World of Sports set. To participate just follow these simple steps:

3.       Write your name, address, phone number and e-mail address legibly on the back

4.       Send it in to this address to be entered into a random drawing to receive an Upper Deck World of Sports Dual Autograph card of Tiger Woods and Michael Jordan limited to five copies: 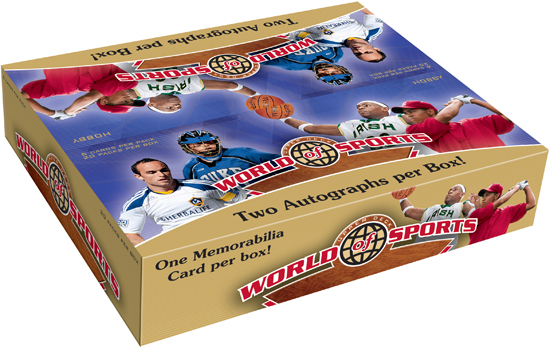 Send in those box tops and take home a signed piece for history for two icons!

Five lucky fans will take home these ultra-rare cards of these two legends from their respective sport. Collect Upper Deck’s 2011 World of Sports set and win! For more details on this promotion details, click here.


Wow, awesome giveaway UD! Is there a limit to how many box tops we can send in one envelope or whatever?


Wow! There you go Upper Deck! Your out doing yourself this time! For a chance to get an MJ/Woods Dual Auto! Sweet! You know I’M IN!
WTG!


Wow ! A card that I’ve been waiting for! Will try.
thanks


Are the base variation autos in this set SPs? I am looking for a Sasha Cohen Auto and the 3 on ebay are going nuts… I was wondering if I was missing something