Last weekend was a busy one for me. I was working the booth for Upper Deck at the well-attended annual NHL All-Star Fan Fair, as well as handling some interviewing duties and autograph signings with NHL stars for the card maker.  Here’s my recap of what went on last weekend in Raleigh, North Carolina, home of the Carolina Hurricanes!

On Saturday night, I had the pleasure of sitting next to the family of Upper Deck’s winning “stick kid,” eight-year-old Devin Ybarra, at the RBC Center. He earned the right to serve as stick kid at the Skills Competition by virtue of submitting the winning essay in a contest entitled “What I love About Hockey.”  Devin returned to his seat beaming and full of stories from his pre-game and on-ice responsibilities about halfway through the night with his jersey filled with signatures. He was most excited about getting his picture taken with Carolina Hurricane’s Captain Eric Staal and was eager and kind enough to share the multitude of other pictures he took. 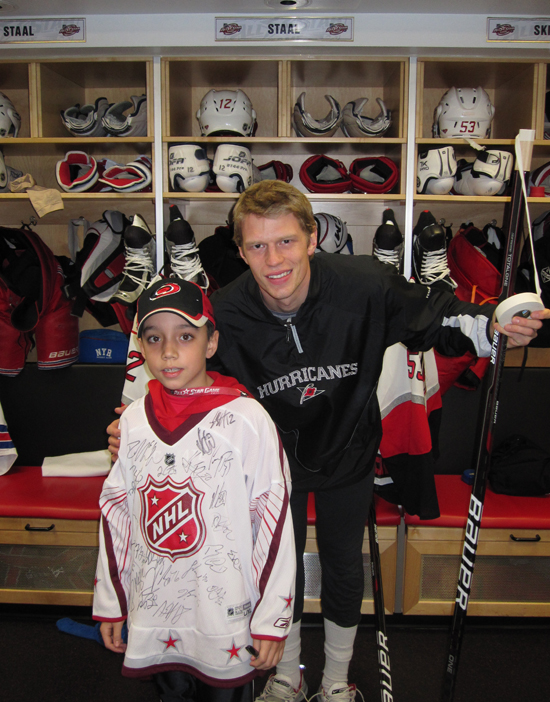 His smile didn’t fade for the rest of the evening’s competition, and though I didn’t see him during Sunday’s activities, I’m pretty sure that smile has taken him all the way through this week, sharing stories and pictures with all his friends and fellow ‘Canes fans.

That’s when I thought about something. For the league, host city and sponsors, the NHL All-Star Game is a business. But for fans, especially the kids, it’s an opportunity, unlike any other, to access the players and partake in all the things they love about the sport.

Devin may have been a slight exception to the rule with the chances he had to participate in events throughout the weekend, but it didn’t stop everyone else from enjoying the unparalleled contact. The best players in the league, even some former greats, could be seen walking around Fan Fair or the players’ hotel, and all were kind enough to stop for a few words or an autograph.

Multiple players were signing autographs at Fan Fair, including Canes’ rookie Jeff Skinner and Edmonton first-year standout Taylor Hall, who both stopped by the Upper Deck booth for an hour to entertain. Skinner’s signing session came complete with a young girl inviting him to prom, which unfortunately he had to decline (I think he’s planning on the playoffs interfering!).

Kids of all ages were able to run through all the fan fair activities, from playing in a floor hockey game of their own, to shooting practice, to taking pictures or playing with an abundance of mascots. A definite fan favorite from this weekend’s event was the personal trading card fair-goers could create at the Upper Deck booth. That’s right; their very own Upper Deck trading card! Kids of all ages, from infants to grandparents, added to their collections with their very own personal Upper Deck NHL All-Star Game card.

Although the line could sometimes be long, it never got boring, as several games of pack wars were played. One young fan won because her Jarome Iginla card reflected the most points from that round’s group of cards, which put her over the top for points.

Players enjoyed several rounds themselves, competing for the best pulls from a pack. Colorado Avalanche teammates Paul Stastny and Matt Duchene played with packs of SP Game Used Hockey. Stastny was the winner with his pull of a dual memorabilia card. Martin St. Louis didn’t play, but his sons did, and one was lucky enough to pull a card of his dad!

Boston’s Tyler Seguin and Tampa Bay’s Steven Stamkos may have had the best pulls from players last weekend. Seguin opened a pack of SP Game Used to find a dual autographed memorabilia card of Wayne Gretzky & Mario Lemieux, numbered to 5, while  Stamkos pulled his own autograph from a pack of Upper Deck Artifacts, which he was kind enough to sign a second time.

One lucky fan went home with that double-autographed Stamkos card, along with a Stamkos signed “Breaking Through” Upper Deck Authenticated piece. He had the perfect place for the card in his collection and for the frame on his wall. Similar to Devin Ybarra, this guy was wearing a very big smile as he left the NHL Fan Fair.

I know fans from all over took in as many of the events and activities as they could, but by the smiling faces of the multitude of fans (especially Devin’s) leaving the Upper Deck booth with their P-cards, autographs and redemption packs, it was easy to conclude that the kids were having the most fun of all. I can’t seem to figure out, though, if the majority of those kids were under the age of 18, or over!

So while the event may be business for some, for the fans, and even for the players, it’s an incredible opportunity for fun and making great memories.

Great article. Devin has been the star at school amongst his friends and staff this past week. Although he realizes what a privilege this experience has been, I look forward to the day when he realizes this truly was a once in a lifetime experience.

BTW – We enjoyed sitting next to you too!


Wondering if Upper Deck produced a set of all star cards for this special game?