How I Did Super Bowl XLV

I love football. Don’t get me wrong, I’m a huge fan of hockey, baseball, basketball, golf and even soccer, but I LOVE football. From college to the pros, I love it. And after growing tired of doing Las Vegas every year for the Super Bowl in the early 2000’s, I decided I wanted to get closer to the game so I began making the trek to the Super Bowl’s host city each year. I have a great group of friends and contacts who are out there every year and it just ends up being a really fun time. 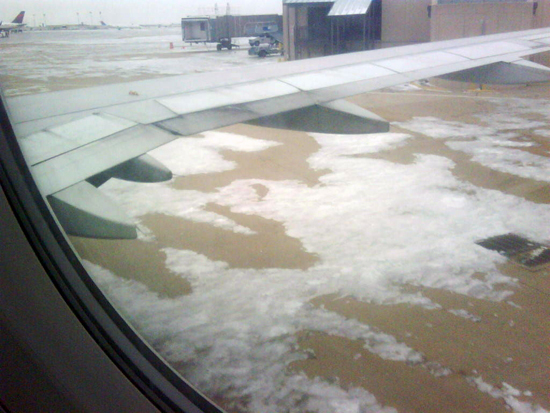 Can someone please get the ice off the runway before I have a category 5 panic attack?

I arrived Thursday afternoon, a little shocked as the weather was just terrible. The Dallas airports were closed the day prior to my arrival due to ice and snow. While I think it is a nice reward to give the Super Bowl to a city that builds a new stadium, it is a disservice to the fans as it belongs in a warm-weather city. As I looked outside the plane at the cold, I wondered if I had accidentally landed in Detroit. I then became upset at how San Diego, where I live, cannot figure out its stadium situation as it is truly the best place to host this annual event. In a perfect world it would alternate from San Diego to New Orleans to Miami. Instead, fans who could make it to town were left to trudge through a city that was ill equipped to handle a weather event of this magnitude. Driving to my hotel the cab slid around the interstate and I noticed large sections of the highway were just shut down, rather than being plowed. Getting from point A to point B this weekend wasn’t going to be easy. 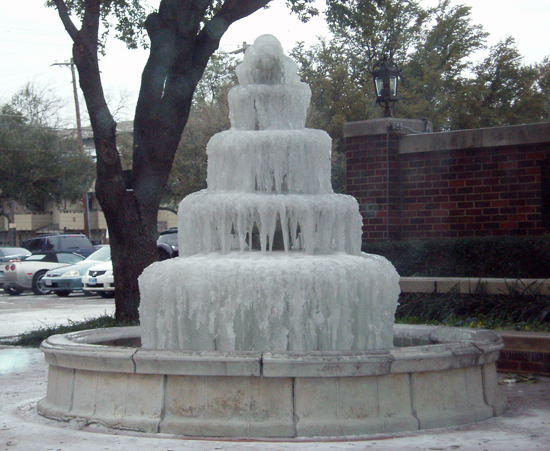 Seriously, when fountains are freezing like this, you know it's cold. Why can't we do this in San Diego???

I met up with some friends and we braved the weather to make it downtown to pick up some tickets for events and then we visited the Nike Suite. The folks at Nike are really the best and they take great care of the athletes that come in throughout the weekend. While we visited, wide receiver Greg Jennings of the eventual Super Bowl winning Green Bay Packers was checking out a variety of different cleats. If he used them, they obviously helped as he was certainly an impact player in the big game (two TDs).

Now I wouldn’t say I’m a party animal, but that’s really one of the big reasons why I make the trip. The parties are just fantastic – if you can score a ticket and get there, that is. We were set to go to the EA Sports Party Thursday night, but after the concierge looked at us like we were crazy for attempting to make an hour plus drive in the dicey conditions, we opted to hit up the Bud Light Hotel party instead. Lifehouse and The Fray were going to be playing and shortly after arrival we were able to score VIP passes so we were all set up. There was a mix of different celebrities in attendance like Jared from Subway (who I always seem to run into at these events) and former NFL greats like Barry Sanders in attendance. The bands were great, the people watching were fantastic and best of all we made it home safe. 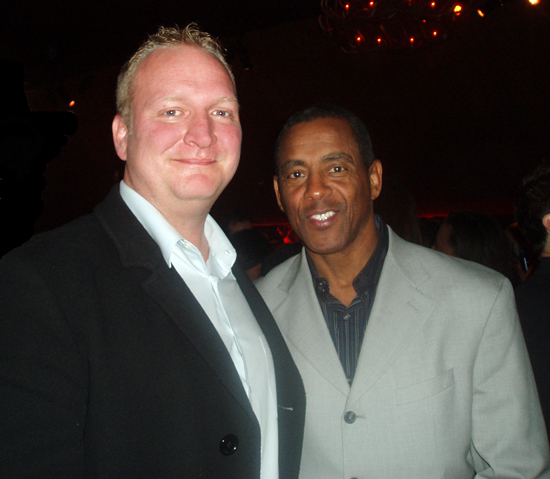 There are just legends everywhere Super Bowl weekend. Here I am with Cowboys great, Tony Dorsett.

Friday I was hoping to make it out to Beckett Media headquarters to do some giveaways and meet with the staff, but the snow from the evening prior closed their facility for the day. We took it easy in preparation for Friday Night’s event: ESPN’s party in Fort Worth. Now this was a long haul to say the least, but we made it out to this huge ranch they had rented and the event proved to be worth the drive. The first thing we saw upon arrival was the World’s Biggest Belt Buckle, then you walk in and you can get your picture taken on a bull, which I of course had to do… 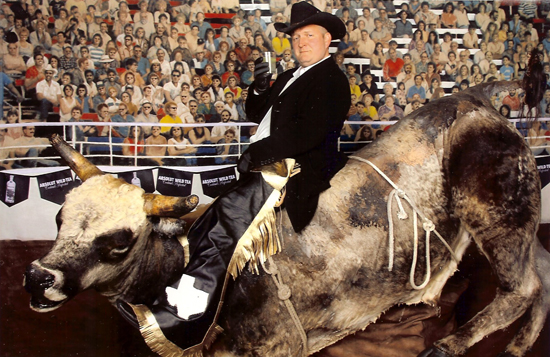 Yee-Haw! I stayed on for well over 8 seconds without breaking a sweat!

In another room they had a variety of shows like roping and photo opportunities with cowboys and cowgirls, just a really great set up. The next room we walked into was huge and had a huge bar, DJ’s, another photo station, food and, of course, a mechanical bull which I chose to avoid. Later on in the evening they opened up another huge room where we got to watch Kid Rock and Rev Run just rock the house. Luckily I had my trusty flip cam on me to document the action…

It was just a great night and even though I was invited to the Playboy party that same evening, I am very happy I went to the ESPN party. I just had a blast!

Saturday was a big day. We headed out early and hit up the NFL Experience. Unfortunately we were not the only ones who had that idea. It was a beautiful day so people were a bit more excited about taking in the city. The NFLX was great, just very busy. There are just some things you can’t wait in line for. The line just to get into the NFL Store was at least an hour long, for example. But we enjoyed checking out things like all the Super Bowl Championship rings, the Wilson Ball section and of course the collectibles area. 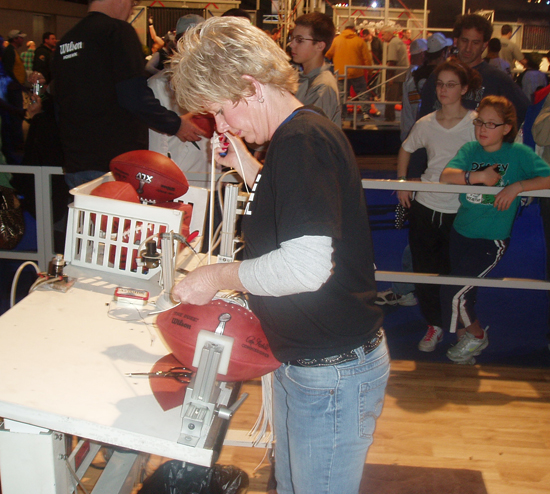 This lady is actually hand stiching the laces on the football. She's been doing it for over 20 years. Unbelievable.

That afternoon we decided to check out the area where JFK was assassinated. There was a protest going on at the grassy knoll, but it was just very interesting to see where this tragedy took place. 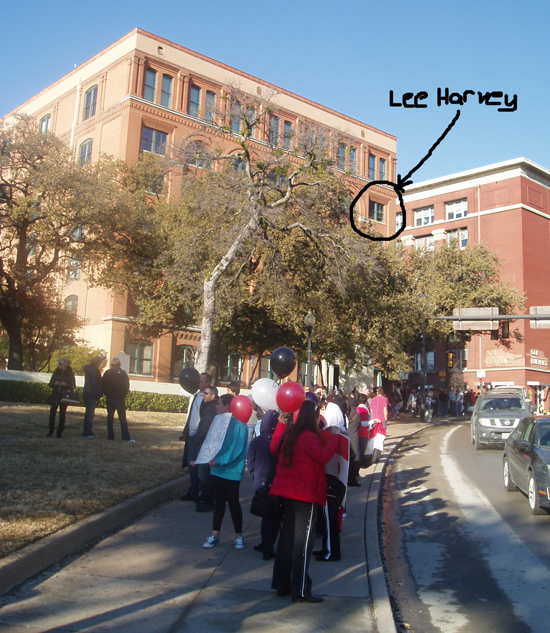 It was pretty surreal to see the spot where JFK was assassinated.

After soaking up the local culture for a couple days I was feeling very Texan. We went into a gift shop that afternoon and I made a big purchase: my first cowboy hat. When in Rome right?

We went back to the hotel to rest up, but we were left with a tough proposition; how were we going to get out that night? I have discovered that finding a cab on Super Bowl weekend in the host city is ALWAYS a very tough proposition. You either have to be lucky or smart. I chose the smart angle and browsed the internet for a car service that is a little more specialized. That’s right, I’m talking about the karaoke cab. They cost the same as a regular cab, you just have to book them differently and since very few people know that something like this exists, they were able to get us at 7:30 that night. We belted out hits from Neil Diamond and Poison while we traveled downtown for Saturday’s party. 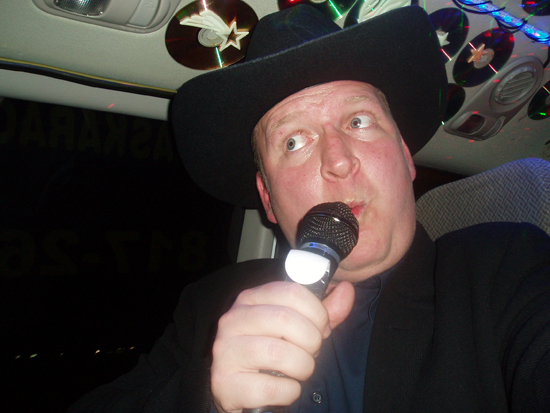 When heading out to a party, nothing beats the karaoke cab!

Tonight we would be attending another event at the Bud Light Hotel with Pitbull, Kei$ha and Nelly that was being put on in association with Jimmy Kimmel Live. My brother works for JKL so we avoided the long line and enjoyed the lounge until it was show time. Unfortunately we may have waited a bit too long as the fire marshal ended up shutting down the entrance due to capacity issues. We had to wait a bit longer in the lounge before we eventually got in to check out the show and naturally Nelly didn’t disappoint.

Now here’s where my Super Bowl experience gets a little different than others. I left early in the morning to come home to watch the game with friends. Why go all the way out to Texas and not go to the game? Well to be honest I really think it is better on television. I also hate the craziness of the airport on Monday after the game. I like to shoot back Sunday when the airport is quiet and take it all in with the people I love, sharing all the fun from the weekend. The game was great and the weekend was one I will remember for a long time. I’m just not sure when I’m going to have the opportunity to break out the cowboy hat again…

Did you do something unique or different for the Super Bowl? We want to hear about it. Share your story as a contributor to our blog by e-mailing us at UpperDeckMarketing@upperdeck.com.